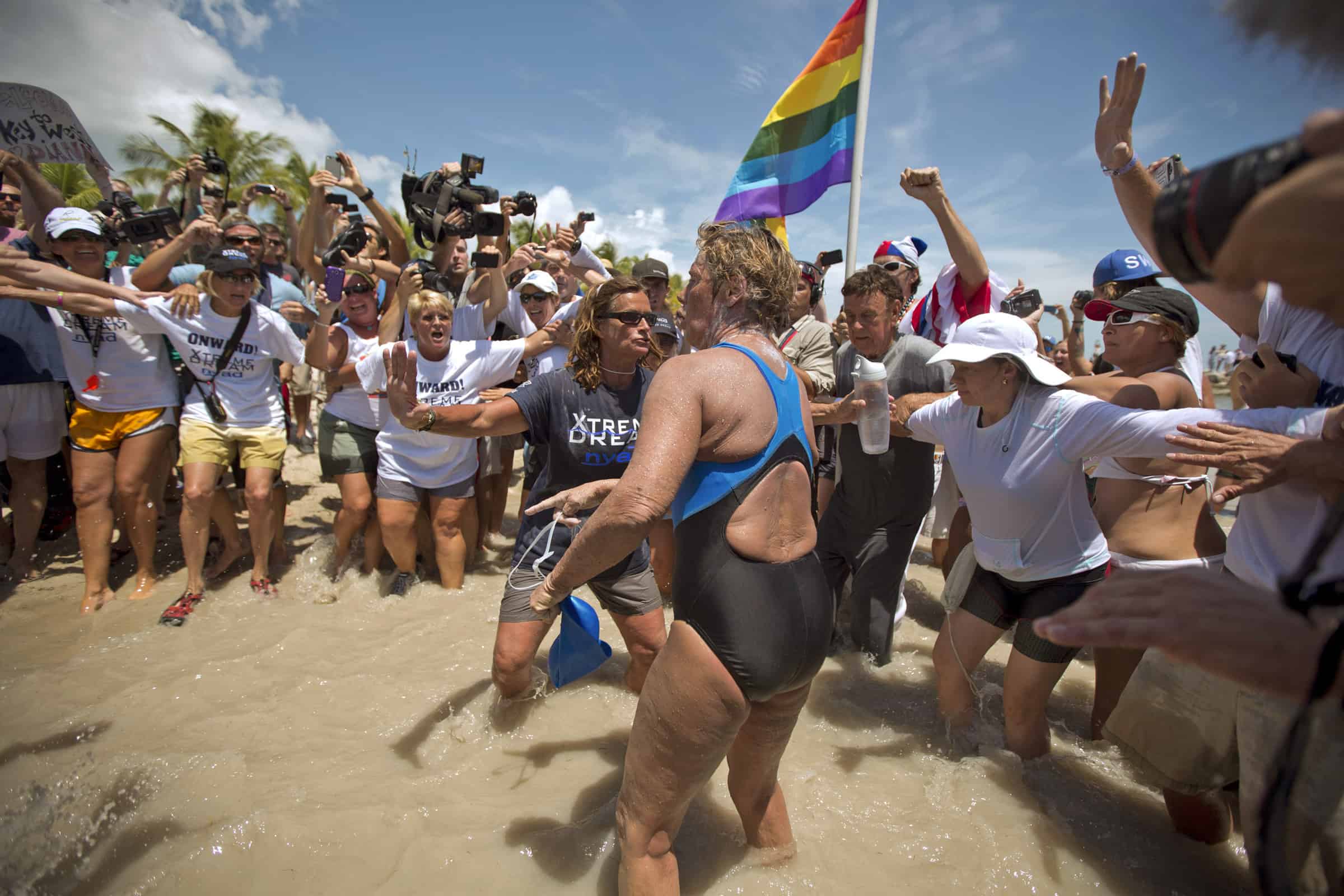 1.) From swimming with sharks to “Dancing with the Stars.” Diana Nyad, the lesbian world-record holding swimmer who last year became the first person to swim from Cuba to Florida — a total of 110 miles — without a shark tank will star on the 18th season of “Dancing with the Stars.” Her partner on the dance floor of the wildly popular ABC series is pro Henry Byalikov who has danced on Australia’s “So You Think You Can Dance” and was featured as a dancer in “The Great Gatbsy.”

Nyad, 64, attempted to swim from Cuba to Florida four other times before becoming successful on her fifth attempt last year.

2.) Mississippi fighting anti-gay “religious freedom” bill. An amended version of Mississippi’s “Religious Freedom Restoration Act,” or SB 2681, is heading to the House floor for a possible vote and LGBT activists are warning the bill would legalize discrimination.

“Substantive portions of the bill remain unchanged and the bill could still open the door for legalized discrimination against LGBT Mississippians and visitors to the state. The bill now heads to a vote by the House, which has until March 14 to take the measure up,” states a press release from the Campaign for Southern Equality.

“We have serious concerns about the ‘Religious Freedom Restoration Act – it’s clear that this extreme bill is about legalizing discrimination, not protecting religious freedoms,” said Rev. Jasmine Beach-Ferrara, executive director of CSE, in a statement. “Even in its amended form, SB 2681 is still bad for business and bad for Mississippi families. LGBT advocates, allies, business and faith leaders will continue to call on their legislators to vote against the bill.”

Georgia LGBT activists fought off the vote of two similar “religious freedom” bills in the past two weeks as well as numerous other states across the nation, including in Arizona where a bill was passed but then vetoed by Gov. Jan Brewer after major corporations came out against the bill. Atlanta-based companies Delta Air Lines and Coca-Cola also spoke out against the bills.

3.) The Bluegrass State heading for bruising battle? After Kentucky’s Attorney General Jack Conway said he would not appeal the case in which a federal judge ruled the state must start recognizing same-sex marriages from other states and countries, the governor said he would hire outside attorneys to fight the battle.

Conway said at a news conference he wouldn’t defend the appeal because to do so would be “defending discrimination.” Gov. Steve Beshear issued a statement outside counsel would be hired to do the job.

“Other Kentucky courts may reach different and conflicting decisions,” Beshear said in a statement on Tuesday. “Employers, health care providers, governmental agencies and others faced with changing rules need a clear and certain roadmap. Also, people may take action based on this decision only to be placed at a disadvantage should a higher court reverse the decision.”

4.) “Homosexuals are not criminals.” Vatican Cardinal Peter Turkson of Ghana spoke out against Uganda’s draconian anti-gay law but urged countries to continue to provide international aid to the poor country.

Turkson said Tuesday that “homosexuals are not criminals” at a church and human rights conference.

The Wold Bank has postponed a $90 million loan to Uganda after Uganda’s president signed the controversial bill into law. The law would imprison gay people

5.) Rapper 50 Cent needs to make some change — fast. After suggesting on Instagram that Diddy, Rick Ross and Steve Stoute, a former record executive, were all gay together, the rapper backed down almost immediately.

50 Cent posted a photo of Stoute and Diddy, both wearing pink shirts, embracing and also posted a photo of Diddy and Ross at an angle that makes it appear they are about to kiss. Underneath the pics, Fiddy wrote, “I ain’t saying nothing, but something ain’t right. Lmao.”