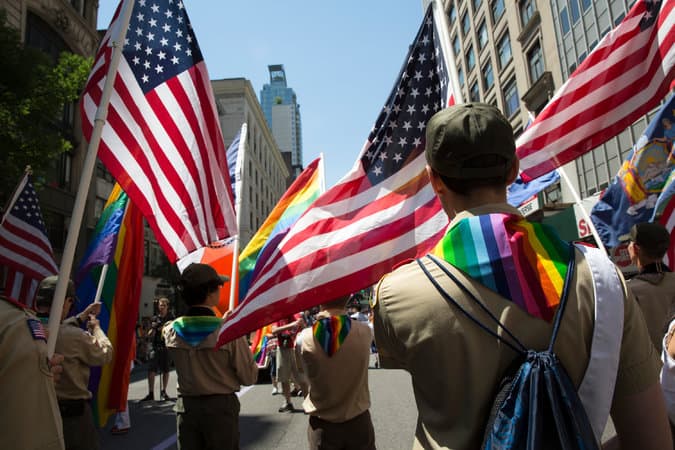 1. A lot of LGBT business to handle yesterday for the U.S. Supreme Court, first with the Hobby Lobby decision which we reported on, as well as California’s gay conversion therapy ban. This one came out in our favor, as the court declined to hear two cases challenging the legality of the ban.

2. “On Monday morning, the apocalypse didn’t come. In fact, quite the opposite.” Speaking of the Hobby Lobby decision, a Slate writer says the ruling is surprisingly good for LGBTs.

3. “Khaki shirts, olive pants and rainbow neckerchiefs: the Boy Scout uniform, pride-style — a uniform that had never been seen on a group of marchers in New York City’s pride parade before.” The Boy Scouts march in New York City’s pride parade for the first time, following the ban being lifted on openly gay scouts. Neat moment: as they passed the Stonewall Inn, the marchers paused and gave the Scout salute.

4. Buzzfeed has a story on what Mississippi’s most prominent chef and cultural ambassador is doing to fight the state’s new anti-gay “religious freedom” law.

5. VIDEO OF THE DAY: “US groups recognized the market for homophobia stateside was dwindling and so tried to sell it somewhere else. Africa isn’t just where we send our losing team’s Super Bowl shirts, it’s also where we now send our losing political philosophies.” John Oliver explores the U.S.’s role in bringing anti-gay legislation to Uganda.