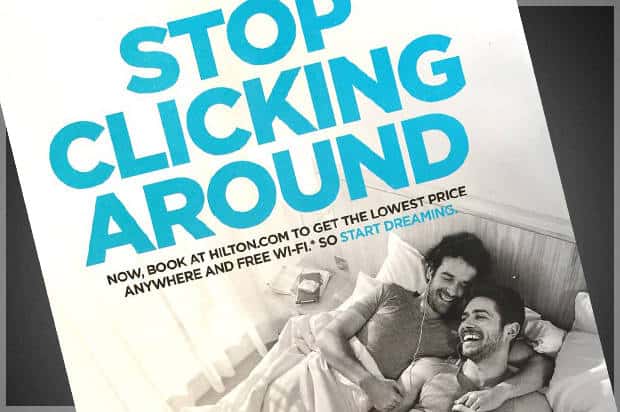 1. Chelsea Clinton talked about the GOP’s anti-LGBT platform Wednesday in Philadelphia at an event hosted by the Human Rights Campaign and the Victory Fund, singling out conversion therapy in particular and calling it “child abuse.”

2. “If Hilton had advertised two men playing tennis, cards, or having lunch, that would have been reasonable. However, Hilton chose to make a cultural and social statement by purposely marketing the promotion of homosexuality to a large segment of the population who finds the idea of two men sleeping together unnatural and offensive.” The folks at the anti-LGBT American Family Association are clutching their pearls over this Hilton ad showing a gay couple in bed.

3. Artists from independent record label MPress Records have teamed up to create a special fundraising EP in the wake of the Orlando shooting. All proceeds from sales of the “Songs For Orlando” album will benefit The GLBT Community Center of Central Florida and OneOrlando.

4. “I think also right now I’m just really in love with my girlfriend. We’ve broken up a couple of times and gotten back together, and this time I was like, ‘Finally, I can feel again.’” Actress Kristen Stewart talks to Elle magazine about her relationship and being more open about it.