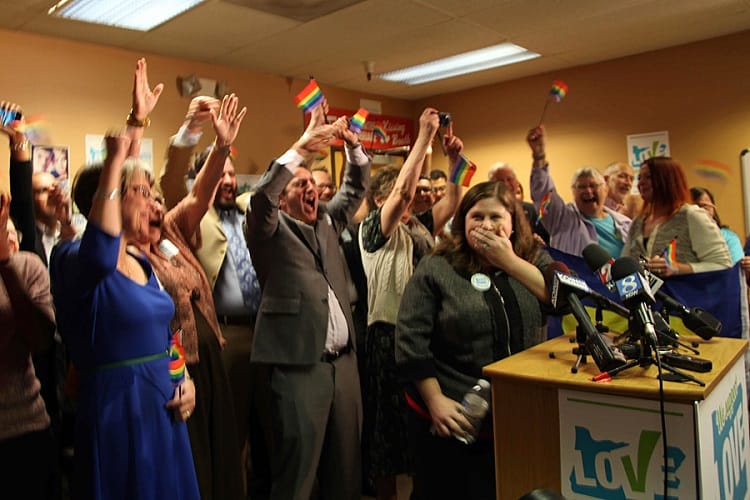 1. Mark another in a growing list of recent losses for anti-gay marriage group the National Organization for Marriage. Five days before Oregon’s gay marriage ban was struck down in May, U.S. District Judge Michael McShane denied the group’s request to intervene to defend the ban—strike one. Then just hours before McShane ruled, NOM filed to stop the court proceedings, and were denied again—strike two. Then late yesterday, the U.S. Supreme Court issued a terse, one-sentence ruling denying NOM’s request to stay the decision to strike down the ban—and they’re out? Not exactly. NOM appealed McShane’s decision to deny their request to intervene in the case, and that will be heard by a federal court of appeals later this year. Wonder how that one will turn out.

2. Same-sex marriages will be allowed to take place in the British consulates of Russia and more than 20 other countries, Britain’s Foreign Office has announced.

3. “The puzzle is not whether ‘gay genes’ exist in humans, but why they are so common (estimates from five percent to 15 percent).” WaPo takes a look at the latest news on the “gay gene.”

4. The Texas GOP’s platform will now endorse ex-gay therapy for “patients who are seeking escape from the homosexual lifestyle.”

5. VIDEO OF THE DAY: A seven-year-old California boy has started an anti-bullying club after bullying another boy for bringing a Barbie doll to show and tell.