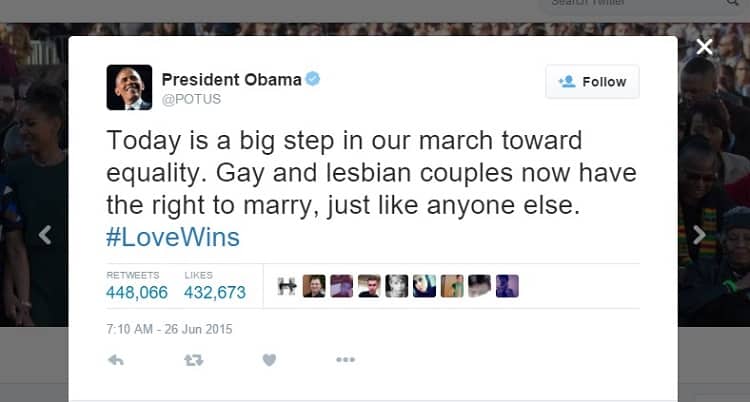 1. Politico says President Obama’s tweet on the Supreme Court decision to legalize same-sex marriage was the number one politics and government tweet of the year.

2. “Holly came from Miami F.L.A. / Hitchhiked her way across the U.S.A. / Plucked her eyebrows on the way / Shaved her legs and then he was a she / She said, hey babe, take a walk on the wild side / Said, hey honey, take a walk on the wild side.” Holly Woodlawn, a pioneering trans entertainer who rose to fame in Andy Warhol’s 1970 film “Trash” and who Lou Reed immortalized in the first verse of his 1972 hit “Walk On The Wild Side,” died of cancer on Sunday.

3. “When confronted with something out of their comfort zone, like me and my boyfriend in full drag dancing down the road, muslims like all British people get flustered and over compensate with being overly polite — a bit like Hugh Grant.” Don’t miss this gay London man’s viral blog post “15 things I learnt about Islam and British values being a gay boy living opposite a mosque.”

4. The Advocate tells you what’s gay about the 2016 Grammy nominations, which were announced Monday morning.

5. VIDEO OF THE DAY: Two gay men reflect on the milestone of becoming parents in this heartwarming ad from Allstate Insurance.