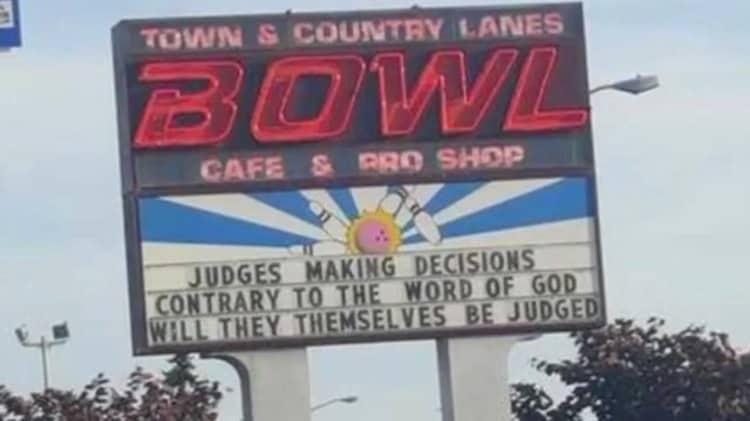 1. “My statement may be stronger than I should have put, but I’m not a sugar-coater. I truly am not trying to offend anyone. I’m just so concerned where our nation is headed and the ungodly decisions that are being made and our nation is just going down hill and we’re going to be judged for it. If we don’t start turning back to God, we’re going to be in deep trouble.” An anti-gay message outside a bowling alley in Oregon was removed after a backlash.

2, Russia has created a “flag for straights” to fight “gay fever.” Best of luck on that.

3. “If I file a complaint because a man I had sex with robbed me, I’m denouncing myself under Section 377. It’s a lose-lose situation.” The Wall Street Journal on how online dating is creating new dangers for gay men in India.

4. “To me, it’s the same thing they did back in the day, saying that black people couldn’t do something because ‘it’s my religious belief.'” Candace Cameron Bure (“Full House”) and Raven-Symoné got into it about anti-gay bakeries on “The View.”

5. VIDEO OF THE DAY: Check out “Counter,” an 11-minute short film that centers on a 30-year-old Bayard Rustin conducting a solo sit-in at a diner in 1942 Indianapolis. Rustin, who was gay, was Martin Luther King Jr.’s advisor and one of the organizers of the 1963 March on Washington. (h/t Indiewire)