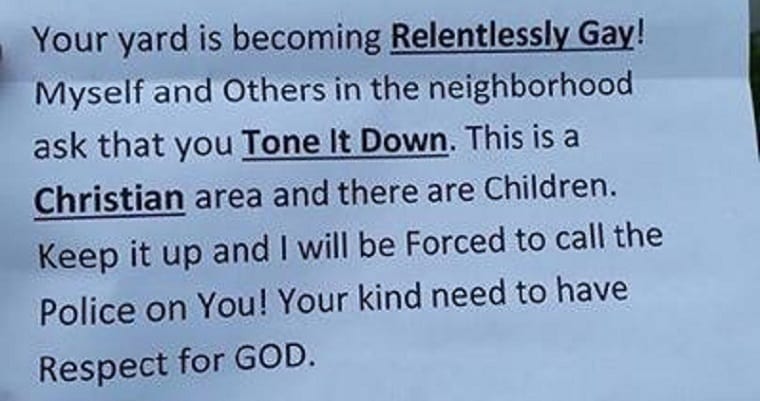 1. No decision on same-sex marriage from the U.S. Supreme Court today. Next chance is this upcoming Monday morning.

2. The anti-LGBT National Organization for Marriage will ask Republican presidential hopefuls to sign a pledge promising to support a constitutional amendment defining marriage as between one man and one woman. Those folks are just ADORABLE.

3. “Civil war,” “endless trauma” and “the end of a great civilization.” HuffPo rounds up what marriage equality opponents predict will happen if same-sex marriage is legalized nationwide.

4. “Needless to say… I need more rainbows… Many, many more rainbows…” After a Baltimore woman strung up rainbow-colored solar lights in her front yard, a neighbor left a note saying they would call the police if she didn’t tone down the “relentlessly gay” decorations. And what did she do? Take them down? Of course not, she started a GoFundMe campaign to raise money to put up even more relentlessly gay lawn tchotchkes. She’s surpassed her $5,000 goal and is now sitting on nearly $18,000. God bless America.

5. VIDEO OF THE DAY: In the rare LGBT-inclusive corporate ad to feature someone who’s not a white gay man, Google releases this ad for their My Business tools which features a white trans man. Baby steps.