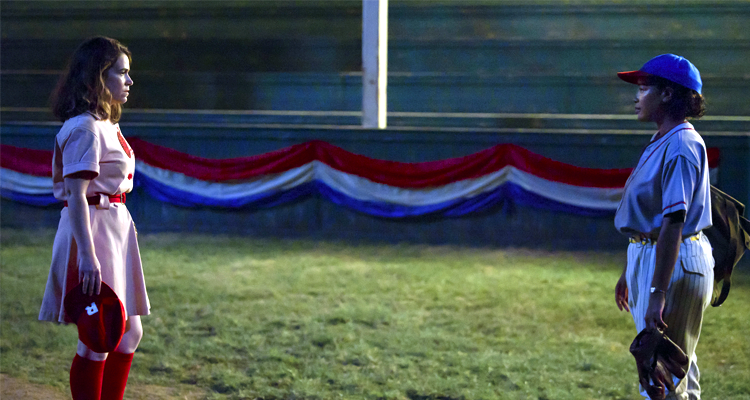 ‘A League of Their Own’ / Publicity photo

Come sing, dance and have the time of your life at Abba The Concert, a tribute to the legendary band. 8pm, Cobb Energy Performing Arts Centre

Get creative, stay sexy, and have some fun, celebrating freedoms as Black and Brown queer people at the Anything But Clothes event. Dressing the part is half the fun, and kind of the whole point, sponsored by Deviant Events. Deviant is an intentionally sexy party, curated for and by Black and Brown queer people. Allies are also welcome in this safe space. Expect to dance, drink, and mingle, with music by DJ Jash Jay and Kenneth Kyrell. 10pm to 3am, The Hangar

“I Dreamed a Dreamgirl” is a two-man tour de force as performers Emerson Collins and Blake McIver tell the stories of their relationship and careers through showtunes, duets, Disney favs (and deep cuts), mashups and medleys that (probably) shouldn’t exist combining theatre, cabaret and pop. McIver has three decades of entertainment experience from winning junior vocalist champion on “Star Search” and “Full House.” Collins was featured in “Rent: Live on Fox” and produced and starred in “Southern Baptist Sissies,” “A Very Sordid Wedding” and Logo’s “Sordid Lives: The Series.” 8pm to 10pm, Out Front Theatre Company

Out On Film, Atlanta Pride Committee and Georgia Voice are teaming to present a free screening of two episodes of Prime Video’s new “A League of Their Own.” “A League of Their Own” evokes the joyful spirit of Penny Marshall’s beloved classic film, while widening the lens to tell the story of an entire generation of women who dreamed of playing professional baseball. The show takes a deeper look at race and sexuality, following the journey of a whole new ensemble of characters as they carve their own paths towards the field, both in the league and outside of it. RSVP here. 7pm, Landmark Midtown Art Cinema

Get your Gloria Gaynor on at PALS Drag Queen Bingo. 7:30pm to 9:30pm, Lips Atlanta

The Queer Romance Book Club is a group of adults that reads and discusses queer romance stories of all kinds. From new releases to older stories, contemporary to historical settings (with even some fantasy on occasion), the books read will also feature diverse pairings/configurations, sexualities, and gender expressions. This Month’s book is “Writer’s Block” by Ali Vali. Register in advance for this meeting: https://us02web.zoom.us/meeting/register/tZEvce6gpz8oGdGoBCFvWTle8syozvZT09vn. 7pm to 8:30pm.

Robert Ray celebrates 50 years in show business with “Back to Before,” an eclectic evening of Broadway, pop, jazz and country music. Staged in an up-tempo Vegas style, he will share intimate stories of the ups and downs of a young man from Palmetto, Georgia, who beat many odds to land a featured role in a Broadway hit and followed that success with years of theatrical, cabaret, nightclub and concert performances. Ray will be joined by his longtime singing partners Jessica Wax and Shawn Megorden along with guest performers Truman Griffin and Chris Saltalamacchio. Kevin Baldesare and Travis Cox will make their Atlanta concert debuts. 7:30pm, Balzer Theatre at Herren’s

Multi-platinum band Lady A is inviting fans to join their Request Line Tour tonight. Each night fans will experience the hit-packed set backed by rich harmonies the band is known for, while also interacting with the band in real time to directly request songs, making no two shows the same. 7:30pm, Fox Theatre

The PFLAG support group for parents and families of LGBTQ children meets in person. 2:30pm to 4pm, Spiritual Living Center

The LGBTQ+ Book Club is a group for LGBTQ+ folks and allies to read queer-themed books and books by queer authors. The goal is to have diverse thought-provoking discussions about queer identity, history, and topical issues. This month’s book is “Mean” by Myriam Gurba. Register in advance for this meeting at https://us02web.zoom.us/meeting/register/tZEkcO2rpzojGdANXXiqdPgA0TsjdZcs_rYe. 10am to 11:30am.

Barking Leather and Good Boy Productions are proud to announce the first-ever Spelling Bee(DSM). This isn’t your daddy’s spelling bee! Test your knowledge of kink, fetish, and queer vocabulary for the chance to win the grand prize of $250 credit at Barking Leather, the 2022 Spelling Bee(DSM) winner’s patch, plus the grand-prize basket filled with goodies from local queer businesses and kink stores. Prize baskets will also be awarded to second and third place. Show up in gear and your first drink is free! 6pm to 9pm, Out Front Theatre Company

Get your networking on! Out Georgia Business Alliance’s August 2022 Power Connect is tonight. 6:30pm to 8:30pm, The Gathering Spot ATL