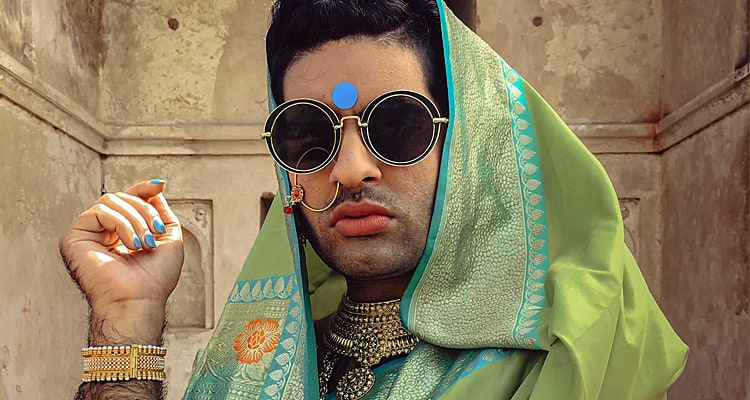 Best Bets: Our Guide to the Best LGBTQ Events in Atlanta for June 21-July 4

“Altar Boyz” is a foot-stomping, rafter-raising, musical comedy about a fictitious Christian boy-band on the last night of their national “Raise the Praise” tour. The Boyz are five all-singing, all-dancing heartthrobs from Ohio: Matthew, Mark, Luke, Juan and Abraham. With their tight harmonies and spectacular choreography, the musical will delight audiences of all ages.

What feminine part of yourself did you have to destroy in order to survive in this world? At what point does femininity become synonymous with apology? Who hurt the people who hurt you? Alok Vaid-Menon is trying to figure it out. Join for an evening of poetry, stand-up comedy, drag, and more as Alok takes the audience on an emotional roller coaster all the way from the personal to the political. The event is hosted by Wussy Magazine.

Commemorating the 50th Anniversary of the Stonewall Riots, the Atlanta Gay Men’s Chorus’ “I See You: 50 Years After Stonewall” pays tribute to brave activists from diverse ethnic, racial, sexual, and gender identity backgrounds. Together, they ended the silence with their voices, their actions, and the coming together of a liberation movement. This concert weaves a story through LGBTQIA history, recounting the struggle of early activists who sacrificed to protest police brutality and unjust treatment of a marginalized community. What once was routine police raids of gay establishments in the 1960s sparked a revolution for the modern fight for LGBTQIA rights. “I See You: 50 Years After Stonewall” features pieces such as “Over the Rainbow” (paying tribute to Judy Garland), “Sticks and Stones” from the musical “I Am Harvey Milk,” and “I Am What I Am” from “La Cage Aux Folles.”

If you enjoyed the Life’s a Drag: Lip Sync for the Crown then you don’t want to miss the send-off party to help send the softball team Atlanta Chargers to the World Series. Tonight’s event promises an amazing lineup of girls to give you a night to remember as well as some amazing raffles and Jell-O shots.

Horizon Theatre continues the LGBTQ-themed “The Cake.” When Della, a North Carolina baker and devout Christian, is asked to bake a wedding cake for her best friend’s daughter, she is overjoyed. That joy is short-lived, though, when she learns that the intended is another bride. Struggling to reconcile her deeply-held belief in “traditional marriage” and the love she has for the woman she helped raise, Della finds herself in strange new territory. Inspired by a story still in the headlines, this is a new play by Bekah Brunstetter (TV’s “This is Us”).

Spanning the entirety of her life, “Over the Rainbow” highlights the incredible career and legacy of Judy Garland, including some of her most famous songs, films and milestones, such as “The Wizard of Oz,’ “A Star is Born,” “Judy at Carnegie Hall” and more. This cabaret celebrates all that Garland lived and left behind, acting as a showcase for her constant struggles, resilience and everything that makes her a lifelong icon.

a night of the best beats in Atlanta!

Sock and Jocks returns with DJ Neon the Glowgobear! As always, no cover!

Stay up until the sun rises with DJ Steven Radant at Xion After Hours!

The LGBTQ History Tour celebrates another year of sharing Atlanta’s

The Center for Civil and

Join in the sun for a Deep South pool party to honor the 50th anniversary of Stonewall. Music will be provided by Deep South ATL residents Vicki Powell, Brian Rojas and Ash Lauryn.

The excellent, Tony Award-winning musical “Come From Away” — about planes that landed in Gander after 9/11.

Join together with community and local faith leaders to remember and honor those who have gone before us at the Stonewall Interfaith Celebration. Hosted by Saint Mark United Methodist Church, Atlanta Pride and Black Gay Pride, the event is designed to foster strength and encouragement to continue the work of liberation.

“Men We Reaped” by Jesmyn Ward.

From the friendly neighborhood gays who brought you “Queer Drunk History,” Fruits and WUSSY Mag present “The FLY: Trashy Queer Stories Told Live.” Organizers believe it’s important for queer people to tell their own narratives, no matter how vile and disgusting they may be. Join in for a night of filthy and hilarious stories told by drag queens, improvisers and stand-up comics. Upon arrival, you will be able to sign up to share your trashiest story. Please keep your uncensored stories and around five minutes. The event is hosted by Molly Rimswell and features stories from the likes of Biqtch Puddin’, Brigitte Bidet, Meatball, Priscilla Chambers and Taylor Alxndr.

It’s time for Cruise Control with

Charis and the Counter Narrative Project welcome authors Jericho Brown, Darius Bost and Calvin Warren for a multi-disciplinary discussion about Black Gay resilience, creativity and love in response to anti-Black and anti-queer violence and terrorism of the 50th anniversary of the Stonewall riots, moderated by Charles Stephens, founder of The Counter Narrative Project.

Coro Vocati, a leading Atlanta-based chamber choir, is proud to produce the Georgia professional premiere of “Considering Matthew Shepard,” a powerful and emotionally gripping musical journey about the life and legacy of hate-crime victim Matthew Shepard. Given the special nature of the concert, Coro Vocati is inviting select high school students from throughout metro Atlanta and members of the Atlanta Gay Men’s Chorus, Atlanta Women’s Chorus and OurSong to join in singing one of the final pieces of the program, “All of Us.” This meaningful song describes the role everyone has in creating a society that promotes love and rejects hate.

In the predawn hours of June 28, 1969, the Stonewall Inn was full to the rafters when it was raided by police. 50 years later, Dykes on Bikes® Atlanta, in partnership with Atlanta Pride Committee and Femme Mafia Atlanta, will pay homage to the past, present, and future of the LGBTQ movement that erupted that night. Deep within the walls of My Sisters’ Room’s Red Light District, organizers present a fabulous spectacle of queers through the years. Join in celebration of those who came before us, and look towards what’s to come. Proceeds will be donated to Positive Impact Health Centers.

DJ Roland Belmares from Los Angeles returns to Heretic Atlanta for a night of music, dancing and hot men!

Tum Tum is a safer space for Jewish LGBTQ+ identified youth and allies to share, learn, and connect. Participants will meet at The Phillip Rush Center and then make the short walk over to nearby Candler Park for a group picnic, water balloon fight, and more. Snacks will be provided.

Trans and Friends is a youth-focused group for trans people, people questioning their own gender and aspiring allies, providing a facilitated space to discuss gender, relevant resources and activism around social issues.

The PFLAG support group for parents and families of LGBTQ children opens its doors tonight.

Make a night of it at Midtown Moon, with Pop Quiz Trivia followed by Soulstar Karaoke.

and Tina Turner and get ready for karaoke tonight.

Celebrate the 4th of July with the Indepen-DANCE party with DJ Eric James! No cover!

Atlanta Bear Fest kicks off tonight and offers four days of events for grizzlies, cubs, and more, including pool parties and nightly happenings.