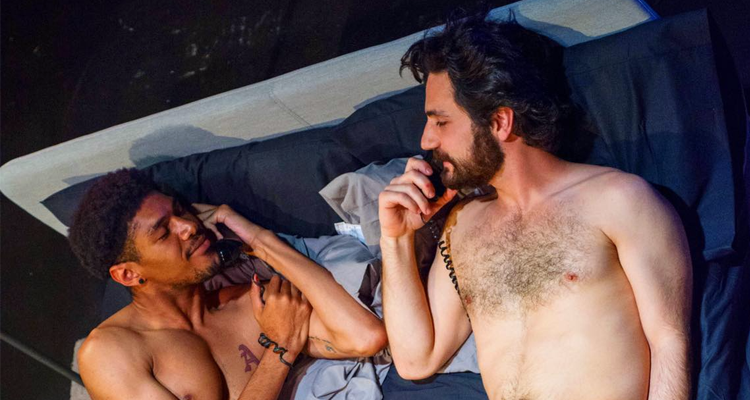 Out Front Theater is streaming "Jerker" for Pride month.

Happy Pride month, Atlanta! While official Atlanta Pride isn’t until October, that doesn’t mean you have to wait to celebrate. All month long, check out some of the best Pride events Atlanta has to offer, from virtual plays to baseball games and everything in between. There’s something for everyone!

Out Front Theatre is celebrating Pride month by offering five productions for streaming at only $10 a show, which include two re-releases and two cabarets from last year.

The selections include “Jerker,” a two-character production touching on the HIV/AIDS epidemic of the ’80s; “warplay,” a funny and poetic reimagination of the relationship between Achilles and Patroclus of Ancient Greece; “Role Reversal Cabaret,” including more than 15 performers in gender-bending productions of classic tunes and modern hits; “Chromatic Cabaret,” a themed cabaret including songs with color themes ranging from sultry jazz to upbeat pop; and “Nearly Naked Cabaret,” with performers in the bare essentials (don’t worry, it’s PG-13) performing sexy, sultry covers of show tunes and pop.

All shows will be available for streaming via the Out Front website, outfronttheatre.com, starting June 1. Proceeds from sales go directly to the nonprofit theater.

Celebrate LGBTQ Pride and team pride at the same time at Truist Park as the Atlanta Braves take on the Boston Red Sox. Head to the pregame party at the Coca-Cola Roxy to enjoy the musical stylings of DJ Kimber from Nonsense ATL and receive a Braves Pride cooler bag as a souvenir. Then, head over to the ballpark to cheer on the Braves at 7:20pm.

Join Georgia Equality to celebrate another year of fighting for LGBTQ equality. This free virtual event will honor Georgia Equality’s progress and review their plans for the future. Learn more at georgiaequality.org.

The Atlanta Gay Men’s Chorus brings musical theater magic to the comfort of your home with its third virtual concert. The category is Broadway realness: enjoy show tunes from classic shows like “Fiddler on the Roof,” “The Wiz,” and “Hello Dolly” as well favorites like “Avenue Q” and “Once on This Island.” Buy tickets for $20 at voicesofnote.org.

Join Atlanta Freedom Bands at The Gazebo Lawn at Historic Grant Park (759 Boulevard SE) for this performance featuring all of AFB’s performing ensembles: the MetroGnomes Stage Band, Atlanta Freedom Color Guard, and the Marching and Concert Bands. Bring a blanket or chairs, soak in the spring sunset, and dance along to a program that includes Disney classics, Fillmore marches, and bops from the likes of Queen and Lizzo. This concert is free, but donations are gladly accepted at atlantafreedombands.com. If there is rain, the show will be pushed to June 20 at the same time and place.

Southern Fried Queer Pride is celebrating seven years of community engagement and mutual aid with a weekend of amazing events. Enjoy an art exhibition at The Bakery; a queer dance party, variety show, and movie night at Best End Brewing; virtual mutual aid workshops; a pop-up thrift shop and artist market, and a plant potluck and swap! Learn more about each event and RSVP at southernfriedqueerpride.com.

Out Night at the Georgia Aquarium: June 25, 7pm

Let’s reunite over cocktails and fish tails! This 21+ event is the first in-person Atlanta Pride event in over a year, and it promises to be amazing. Enjoy a one-of-a-kind, socially distanced night at the Georgia Aquarium with extended hours, three complimentary cocktails, dining options for purchase, and music by LGBTQ DJs Seth Breezy and Ree De La Vega. To maintain social distancing, this event is limited capacity, so grab your tickets ASAP! Tickets are $60 and can be purchased at georgiaaquarium.com/outnight.