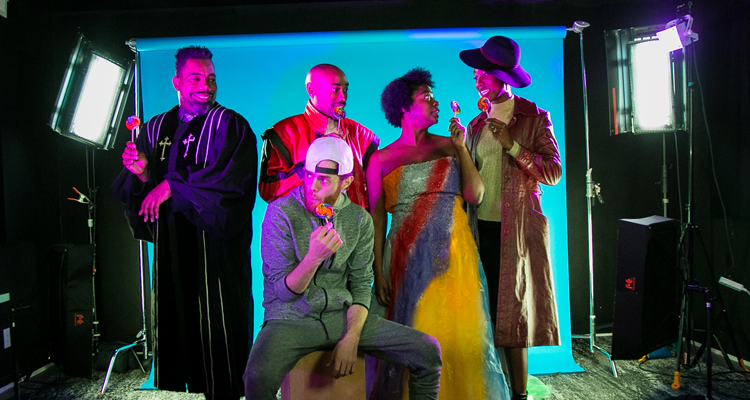 Charis Books and More welcomes authors Sonora Reyes and R/B Mertz for a conversation moderated by Charis Circle Executive Director, E.R. Anderson, in celebration of  Reyes’ novel, “The Lesbiana’s Guide to Catholic School” and Mertz’s memoir, “Burning Butch.” This event is co-hosted by the Atlanta Pride Committee. “The Lesbiana’s Guide to Catholic School”  is a sharply funny and moving debut novel about a queer Mexican American girl navigating Catholic school, while falling in love and learning to celebrate her true self. Sixteen-year-old Yamilet Flores prefers to be known for her killer eyeliner, not for being one of the only Mexican kids at her new, mostly white, very rich Catholic school. But at least here no one knows she’s gay, and Yami intends to keep it that way. When divorce moves young R/B Mertz away from rural Pennsylvania and their abusive father, Mertz’s life is torn in two in “Burning Butch.” 7:30pm.

Best End Brewing Co. is hosting a celebration for all to share their pride and unity today. The festivities will feature live music, discounts, a late-night ball, and much more. It is free to attend, until 10:30pm when the ticketed Which Bridgerton Are You? Ball begins.

This year’s Atlanta Pride Run theme, Stronger Together, is based on the principle that in order to advocate and make a positive impact for LGBTQ+ communities and their allies, we must come together through a mutual love of walking, running, and a sense of humanitarianism for each other. Check in at 7am, race starts at 8:30am, Piedmont Park

Out On Film kicks off a month full of LGBTQ film programming with a free series of Local Shorts. 5pm. Out Front Theatre Company

Positive Impact Health Centers in partnership with Atlanta-based AIDS service organizations will be honoring and celebrating the lives of HIV long-term survivors today at 5pm at Piedmont Park’s Greystone Building. This is a free event with free parking. Proof of COVID vaccination will be required at the door. Registration is also required. Register at https://bit.ly/3wASthK.

Trans and Friends is a youth-focused group for trans people, people questioning their own gender and aspiring allies, providing a facilitated space to discuss gender, relevant resources and activism around social issues. 7 – 8pm for youth and 8 – 9pm for adults, Charis Books and More

The LGBTQ-themed “Bootycandy” is in its final weekend. Join Sutter as he propels through a kaleidoscopic odyssey through his childhood home, church, dive bars, seedy motels — and one riotously funny phone conversation about very inappropriate baby names. One of the most acclaimed satirical comedies in decades, “Bootycandy” is an audacious series of subversive vignettes that explore what it means to grow up gay and black in America. 8pm, through June 12, Actor’s Express

The Consulate General of Switzerland in Atlanta and Out On Film present the Georgia premiere of “Madame,” about a flamboyant 90-year-old grandmother and her filmmaker grandson Stéphane explore the development and transmission of gender identity in a patriarchal environment. 7pm, Landmark Midtown Art Cinema, preceded by a 6pm reception at Apres Diem.

HotMess is kicking off a new season of kickball. 6:30pm, Phoenix Park II

Enjoy Dinner at the Colonnade with Atlanta Prime Timers today at 5:45pm on every third Wednesday of the month.

Southeast LeatherFest Atlanta, celebrating its 25th anniversary, will be in person for the first time since 2019 with its usual heavy slate of workshops, panels, womxn gatherings and much more. A full schedule is available at seleatherfest.com

Atlanta Freedom Bands will present “Hear Us Roar!” a concert showcasing the music of women composers. The concert celebrates the centennial of women’s suffrage following the passage of the 19th amendment to the constitution in 1920. The selections are inspiring, jazzy, soul-stirring, and just plain fun. In addition to the music, the audience will experience a pre-concert presentation from Staci Catron, the Cherokee Garden Library Director of the Atlanta History Center. She will speak about women who made their mark on the landscape and architecture of Georgia along with some history of Georgia women in the suffrage movement. 7pm, Church at Ponce & Highland

The Southern Fried Queer Pride 2022 Festival and celebrating eight years of queering Atlanta and the South through the arts and community. The festival will include a Pit Peach pageant, a queer dance party, a queer variety show and more. Eyedrum Gallery

School’s in session, so put on your combat boots and tag a friend. The Atlanta Gay Men’s Chorus is proud to present the world premiere of Julian Hornik’s “@QueerZ,” a new choral theatre work musing on the joys and challenges unique to Gen Z. Ranging from the power of texting to the prevalence of school shootings, the songs explore what matters to a generation that came of age in a time of relative acceptance and support. It is a coming-of-age story of first kisses, family acceptance and betrayal, and ultimately self-acceptance and pride. 8pm, Ferst Center for the Performing Arts on the Georgia Tech Campus

Atlanta-based songwriter Deidre McCalla celebrates the release of her new album Endless Grace with a big birthday show at Eddie’s Attic in Decatur. McCalla is a Black woman, mother, lesbian, feminist, and has been a performing songwriter for almost 50 years. 6pm, buy tickets here.

The Gayly Dose will be live tonight at 7:30pm for a special Celebration of Pride. Guac Y Margys