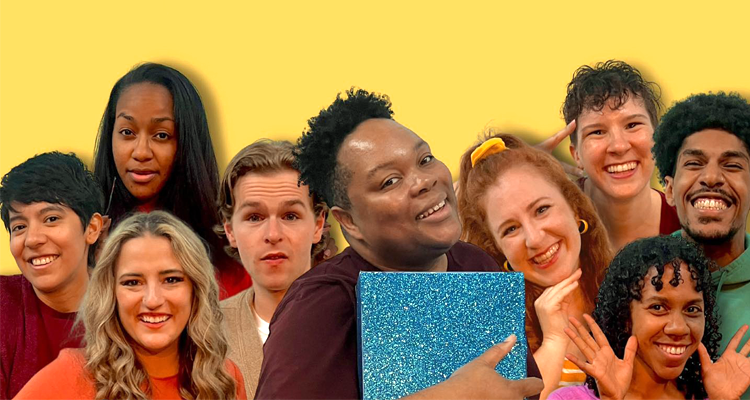 A blue crayon, mislabeled as Red, is having a tough time. As hard as Red tries, his drawings look strange … and everyone is noticing. His mother and brother want to help, his teachers and coach push him in different directions, and his fellow crayon students think he’s just plain weird. Red will try anything in order to be normal. Then, Red makes a new friend who opens his eyes to the possibility that what others see as strange could possibly be what makes him special. Based on Michael Hall’s children’s book, this family musical is about community, self-discovery, and being true to oneself. 8pm tonight through Sept. 11, Out Front Theatre Company

Come out to Woofs and root on the national champion Georgia Bulldogs as they take out Samford. 3pm, Woofs

Bears will be out in force at Chunk—Atlanta, with DJs Vicki Powell, Marceaux Marceaux, Thcktanker, and hot gogo bears all night long, 10pm, Heretic Atlanta

The Queer Romance Book Club is a group of adults that reads and discusses queer romance stories of all kinds. From new releases to older stories, contemporary to historical settings (with even some fantasy on occasion), the books read will also feature diverse pairings/configurations, sexualities, and gender expressions. This Month’s book is “The Companion” by EE Ottoman. Register in advance for this meeting: https://us02web.zoom.us/meeting/register/tZEvce6gpz8oGdGoBCFvWTle8syozvZT09vn, 7 – 8:30pm.

Onstage Atlanta presents Topher Payne’s “Evelyn in Purgatory.” A claim of improper behavior by a failing student lands New York City public school teacher Evelyn Reid in the rubber room: a Reassignment Center, one of a series of empty offices in the Department of Education Building. There she encounters a group of fellow teachers, some guilty, some not, waiting for their cases to be reviewed. Some have already lost any hope of returning to a classroom. Over the course of the school year, these colleagues form an unlikely alliance, reminding each other of forgotten passions, and learning to embrace the possibilities of a life outside the classroom. Tonight at 8pm through October 1

StartOut is excited to present the 3rd Annual StartOut Equity Summit today, a virtual event that will focus on ways for underrepresented entrepreneurs to thrive across geographies and industries regardless of their background. RSVP for Free: https://bit.ly/3oKJ3LC

Skewl is back in session, and you aren’t Josie Grossie anymore. At the Never Been Fist: Back 2 Skewl Photo Party, take some photos upstairs in the Boozy Cougar before you dance all night with Band Leader, DJ Neon Horror. Photos from 9pm to 1am If you don’t want to be put in the WUSSY Burnbook, come out to Mary’s in your most creative high school fantasy outfits—jocks, goths, preppies, normies, freaks, geeks, and janitors all welcome for some good ol’ yearbook style portraits. Mary’s

The PFLAG support group for parents and families of LGBTQ children meets in person today from 2:30 – 4pm, Spiritual Living Center

Trans and Friends is a youth-focused group for trans people, people questioning their own gender and aspiring allies, providing a facilitated space to discuss gender, relevant resources and activism around social issues. 7 – 8pm for youth and 8 – 9pm for adults, Charis Books and More

Out On Film celebrates its 35th anniversary LGBTQ film festival with Billy Eichner’s romantic comedy “Bros,” tonight at 7pm at the Landmark Midtown Art Cinema, with additional screenings through Oct. 2 at Out Front Theatre Company and streaming nationwide.

It’s an annual tradition. AIDS Walk Atlanta Music Festival and 5K Run is a great way to give back to your community. Come together for a 5K walk, run, food trucks, and an epic concert headlined by Wale and Trina. Proceeds raised from the walk and festival go to local AIDS service organizations that fight to end the epidemic in our community every day. 9am, Piedmont Park

The LGBTQ+ Book Club is a group for LGBTQ+ folks and allies to read queer-themed books and books by queer authors. The goal is to have diverse thought-provoking discussions about queer identity, history, and topical issues. This month’s book is “ The Memory Librarian: And Other Stories of Dirty Computer by Janelle Monáe. Register in advance for this meeting at https://us02web.zoom.us/meeting/register/tZEkcO2rpzojGdANXXiqdPgA0TsjdZcs_rYe, 10 – 11:30 a.m.

LMAO is a comedy drag fundraiser for Georgia Equality with Willam Belli from “RuPaul’s Drag Race” and other drag performances. 9pm, Venkman’s