Best Artist
Alli Royce Soble
The top vote-getter here was longtime Atlanta native Alli Royce Soble (www.alliroycesoble.com), who describes her unique work as mixed media. Soble has displayed her art all over the city — from coffee houses to galleries to festivals — and it has clearly made an impression. Patrick Hanson (www.handsonworks.com) finished second and Jon Arge (www.jonarge.com) was third place.

The landslide choice here was long-time Atlanta DJ Vicki Powell. If it’s a major LGBT event, it’s a safe bet Vicki is in the house spinning some great tunes and helping to draw in a big crowds who want to dance the night (or afternoon) away. DJ Mike Pope (www.facebook.com/djmikepopemusic) was second and DJ Shane V (www.djshanev.com) third.

Based in Little 5 Points, Variety Playhouse (www.variety-playhouse.com) is your favorite place to hear live music, especially eclectic bands. The Tabernacle (www.tabernacleatl.com) was your second choice and Eddie’s Attic (www.eddiesattic.com) third.

The self-described sexiest band in the whole world, the Le Sexoflex (www.lesexoflex.com/) is your choice for favorite musician. With infectious tracks like “Juiceboxxx Maxi” and “Poop on Face” and members including Miss Lady Flex, Peep Peep, Vas D, Princess Genius, and Master Dong, it’s no wonder the group has such appeal. Barry Brandon (www.facebook.com/BarryBrandon1) was second and Guyton Maurice (www.guytonmaurice.com) placed third.

When it comes to planning festive local parties, your top choice is Bill Kaelin (www.billkaelin.com). A marketing veteran, he’s only been working for himself just over two years and in that time has thrown all sorts of memorable Midtown soirees, as well as events such as the popular dance-themed gloAtL. In second is Chris Coleman (www.chriscolemanenterprises.com) and in third Barry Brandon (www.facebook.com/BarryBrandon1).

Not only is he your favorite actor but your favorite playwright. In the last year, Topher Payne (www.topherpayne.com) has given us the world premiere of “Tokens of Affection” at Georgia Ensemble Theatre, “Christina Darling” at Onstage Atlanta, and “Lakebottom Proper” at the Springer Opera House in Columbus. He’s prolific — to put it mildly. Johnny Drago was a very close second choice and Kevin Gillese third.

Traditionally known for strong gay and lesbian content, Actor’s Express (www.actorsexpress.com) was the top choice here, coming off of an impressive production of the gay-themed “The Judas Kiss.” The recently announced, splashy 2011-2012 season includes musicals such as “Xanadu” and “Spring Awakening.” Dad’s Garage (www.dadsgarage.com) followed in second and Pinch n’Ouch Theatre (www.pnotheatre.org) third.

Theresa Davis (www.theresa-davis.com) collects awards and accolades by the dozens. Among her numerous recent achievements is being named Women of the World Poetry Slam Champion of 2011. She was also one of the two keynote speakers for the recent Atlanta Queer Literary Festival. In second place was Jose Louis Rodriguez, while third place is Collin Kelley (http://www.collinkelley.blogspot.com/) 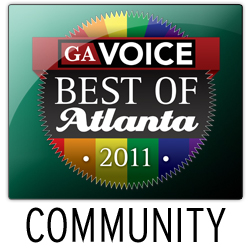 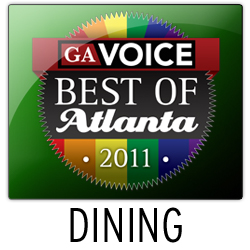 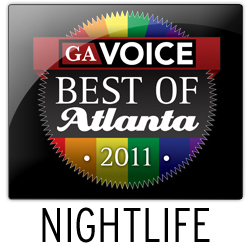 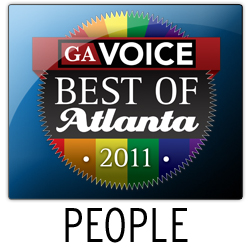 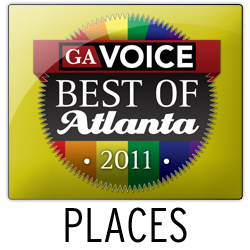 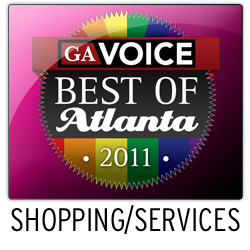