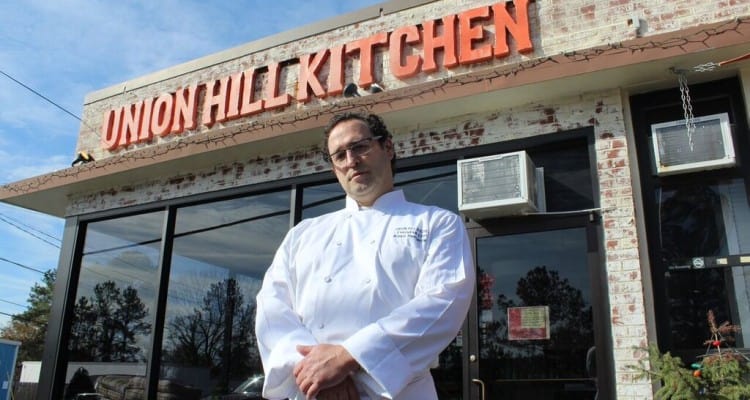 It’s no-frills, unassuming and – according to our readers – absolutely delicious. Little Bangkok (littlebangkokatlanta.com) earned your votes for top Asian restaurant in the city. Tucked in a shopping center off Cheshire Bridge Road, this casual Thai eatery may not look like much from the outside. But what it lacks in outdoor décor, it makes up for inside, with generous portions of genuine Asian dishes at prices that make your wallet as happy as your belly.

Surviving relocations from Decatur, to East Atlanta and now Midtown, My Sister’s Room (www.mysistersroom.com) has earned the top spot as the go-to place to grab great bar grub, and maybe even a date. This isn’t just any standard bar food. While the extensive menu includes traditional late-night snacks like wings and tacos, mouth-watering peach cobbler and a slate of seven types of tasty, baseball-themed sliders take your taste buds to the next level. Visit this lesbian-centric staple on a Saturday night to fill your dance card and your stomach.

Sometimes the old standards are the best! So say our voters who selected Starbucks’ Ansley (www.starbucks.com/store/14958/us/ansley-mall/1544-piedmont-rd-ne-232-atlanta-ga) location as their favorite spot for coffee in the city. Tucked in the Ansley strip mall, this cozy location of the international coffee mecca offers all the standards the chain is known for – from iced lattes and tall mochas, to tasty pastries and seasonal treats. Grab an outdoor seat and sip your drink while watching the gym boys go by.

With to-die-for brunch dishes and, of course their delicious namesake offering, it’s clear to see how the Flying Biscuit (www.flyingbiscuit.com) earned the number one spot for best breakfast. To be sure, the biscuits are amazing! But there’s much more to this breakfast hotspot, including southern-inspired omelets and award-winning shrimp and grits. Choose from three Atlanta-area locations, including one just steps from Piedmont Park.

Brunch is serious business in Atlanta, and if you’re ready for the best the city has to offer, Roxx Tavern (www.roxxfanclub.com) is apparently the place to be! So say our readers, who voted this American comfort food staple tops for lazy Sunday Funday noshing in a relaxed and friendly atmosphere. Fill your belly with a melt-in-your-mouth tender steak and wash it down with a choice from their vast and diverse menu of Bloody Mary cocktails and beers.

First, second and third runners up in this category included Henry’s (www.henrysatl.com), Carroll Street Cafe (carrollstreetcabbagetown.com), and The Shed at Glenwood (www.theshedatglenwood.com)

When the hands preparing the meal matter to you as much as what’s on the menu, there’s only one top choice, and that’s Alexis Hernandez, at Union Hill Kitchen (www.unionhillkitchen.com). A deft touch and playful interpretation of New American cuisine has earned this Food Network alumnus the title of top local chef among our readers. Stop by the Chamblee eatery for an eccentric menu packed with everything from salmon burgers to gourmet deviled eggs.

For a sweet city treat, Cafe Intermezzo (www.cafeintermezzo.com) can’t be beat. This Midtown cafe, popular as much for its French cafe-style outdoor seating as its late-night hours, specializes in rich cakes, decadent pies and other desserts our readers love. Modeled in the vein of a European coffee house, Cafe Intermezzo is an easy choice for a solo chocolate run or an intimate coffee chat with a special friend.

When the party don’t stop – and neither does the appetite – My Sister’s Room (www.mysistersroom.com) is our readers’ top choice to fill their bellies late at night. The number one women’s bar for nearly 20 years, this Midtown favorite also secured our top spot for best bar food, so you know it’s good! Fill up on bar standards like hot wings and chicken fingers, or bump it up a notch with flat bread pizzas or creative sliders.

No foodie city is complete without a wide range of high-end Mexican dining options – and No Mas! Cantina is your unanimous pick for Atlanta’s best of the bunch. You have to have been hiding under a rock not to know about this Atlanta favorite, known for its colorful décor and its amazing artisan craft market. But make no mistake: It’s the authentic-tasting and expertly crafted entrees and little plates that keep people coming back.

Atlanta’s emerging identity as a foodie town has turned up the competitive heat when it comes to success for new restaurants. But M572 (www.fiveseventwo.com) has risen above the pack, according to our voters who deemed this Tucker hot-spot the best new restaurant. Executive chef Jon Allen—a Georgia native—whips up his own brand of inventive southern comfort food served in a farmhouse-style setting.

It’s no secret that in Atlanta, a restaurant’s patio or deck can be just as important as the menu – if not more so. When awesome patio seating is a priority, our readers say Henry’s Midtown Tavern (www.henrysatl.com) is hands down the place to be. It’s not hard to see why: A sexy, modern/industrial indoor dining room opens onto a sprawling patio facing one of the busiest intersections in Midtown. Dine on a diverse menu ranging from seared salmon to gourmet frankfurters while taking in the street sights.

Second and third runners up were Roxx Tavern (www.roxxfanclub.com), and Tacos & Tequilas (www.tandtatlanta.com).

Atlanta isn’t necessarily known as hotbed for Italian cuisine. But when our readers want a taste of Italy that stretches beyond spaghetti, Campagnolo Restaurant Bar (www.campagnoloatl.com) is at the top of the list. The name roughly translates to “country bumpkin” – a moniker that perfectly captures the down-home authenticity of this menu, a seasonal slate of Italian favorites with creative twists. Filling entrees like lemon herb Cornish hen and hearty fish stew will leave you as full as a trip to your Italian grandma’s house.

You’ve scored the date – now where do you take your dream girl (or boy) for dinner? According to our readers, there can be only one answer: Après Diem (apresdiem.com)! Voted the city’s most romantic restaurant, this spot offers a trifecta of dining perfection: Centrally located near Piedmont Park, this sofa-strewn spot also offers intimate ambiance and a menu loaded with tasty, Mediterranean-inspired fare. Enjoy a movie at the theater next door and dine the rest of the night away.

Campagnolo (www.campagnoloatl.com) came in second, followed by The Livingston (www.livingstonatlanta.com).

When you want it good and fast, Doc Chey’s (doccheys.com) is the go-to spot according to our readers, who voted this regional chain specializing in Pan-Asian cuisine number one for local takeout. Chey’s offers the rare combination of higher-end, Asian-inspired food fast. Visit locations in Grant Park, Virginia-Highlands and Emory for favorites like Vietnamese street tacos or cashew stir-fry.

The days of limited vegetarian options are truly in the past – but there remain stalwarts for the best veggie-centric cuisine, and Cafe Sunflower (www.cafesunflower.com) is the leader, according to your votes. This award-winning casual eatery features vegan as well as vegetarian fare that blends Caribbean, Asian and even Mediterranean influences. Stop by the Buckhead or Sandy Springs locations for fried avocado tacos, eggplant caprese and even “chicken” lollipops to make your mouth water.

If eating on a budget is a priority, it’s time to take a trip down to Roxx Tavern, according to our readers who voted this American comfort food tavern tops for tasty dishes with wallet-friendly prices. Keep it simple with a veggie burger, or get fancy with a mouthwatering steak. Whatever your choice, expect to spend less than $30 on average for your meal, earning this spot the top vote for cheap eats in Atlanta.

And taking the prize for best overall restaurant according to our readers is Roxx Tavern. The Cheshire Bridge Road establishment is the ultimate neighborhood restaurant with an expansive patio and friendly waitstaff. And they keep things fresh with their daily specials—the blackened chicken fettuccine on Thursdays is a favorite.

Coming in second place was Campagnolo (www.campagnoloatl.com), followed by The Livingston (www.livingstonatlanta.com) in third.