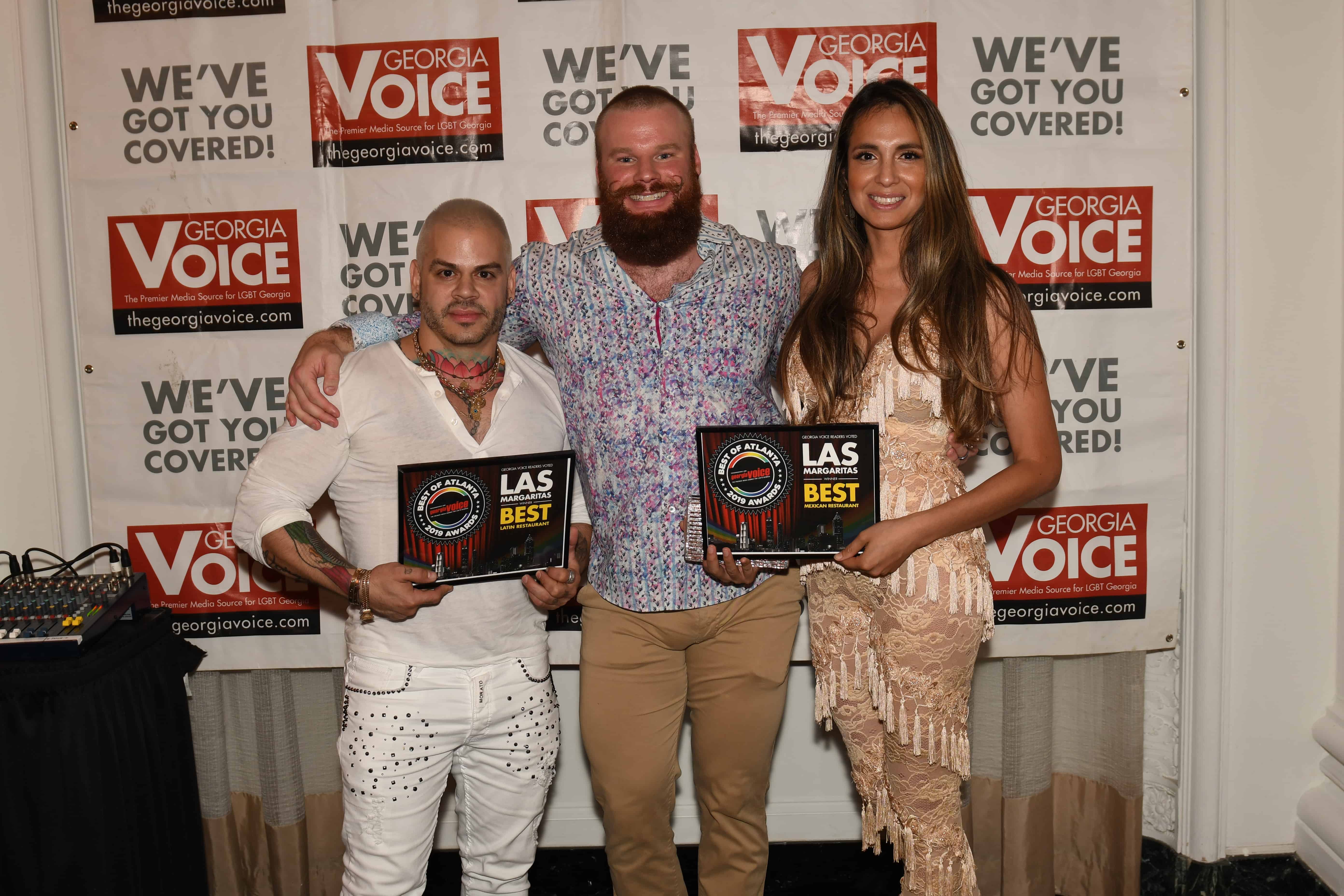 The name says it all! It’s “Pho King” delicious with everything from pho noodle soup to rice plates that encompass most of the foods and beverages of Vietnam. The Midtown location is nestled among tall apartment and office buildings, making it the perfect walkable spot for an afternoon or evening meal all within budget.

Formerly named Burkhart’s, the popular drag bar boasts tasty eats as well! Their juicy steak dinner is the talk of the town, but guests can order seafood, desserts, salads, and appetizers while sipping on their cocktails. Don’t forget to grab your dollar bills as the bar hosts drag shows several times a week. 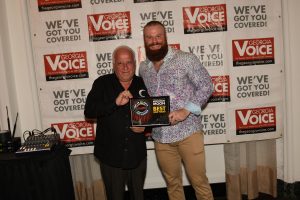 Runners-up are Roxx Tavern and Woofs

This coffee shop in the heart of the gayborhood takes the Best Of award for the fourth year in a row! Talk about a coffee high! A popular all-day spot for the LGBTQ community, this location is known for their LGBTQ baristas, refreshing coffee drinks, and the best people-watching in the metro.

Be prepared to do a lot of finger-licking at Atlanta’s best BBQ joint located in Little Five Points. Opened by twins, Johnathan and Justin Fox, this Texas-style BBQ has been serving Atlantans since 2007. The restaurant is also a featured vendor at the home of the Atlanta Braves, SunTrust Park. They’re also the official BBQ for the Atlanta Falcons and Atlanta United at Mercedes-Benz Stadium! If you’re looking for BBQ on the go, check out their walk-up BBQ stand called “Que”-Osk located at the Armour Yards in Midtown.

There really is a little bit of everything for everyone at Roxx Tavern off Cheshire Bridge, including their EGG-citing Sunday Brunch! From egg entrees to omelettes, and of course those must-have sweets, this Atlanta staple is the place to go for good food and some of the best indoor and outdoor seating in Atlanta. The restaurant’s owner, Dean Chronopoulos, takes the Best Of award for business person for keeping Roxx Tavern a frequent stop for many LGBTQ Atlantans! 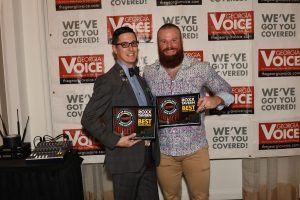 There’s nothing like catching a glimpse of the HOT NOW sign and indulging in a warm and gooey glazed doughnut from one of America’s oldest doughnut companies! It’s so popular in Atlanta, retired NBA star Shaquille O’Neal recently took ownership of the location on Ponce de Leon Avenue! The shop has frequent promotions including specialty doughnuts and email coupons, but you didn’t hear it from us!

For the third year in a row, Highland Bakery is the go-to spot for sweet-tooths across Atlanta! A But first, try their breakfast and lunch menu with a handful of savory items including vegan and vegetarian options! Find the original location in Old Fourth Ward with other locations in Midtown, the GSU campus, and Decatur, all with a cozy, rustic atmosphere perfect for a cup of coffee to get your morning going! Their bakery case is always full of cookies, cupcakes, and tarts, and if you’re due for a wedding soon, they even make wedding cakes! 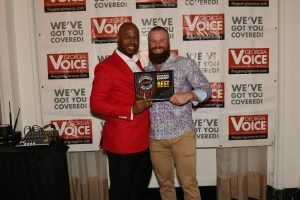 Runners-up are Alon’s Bakery and Market, and Metrotainment Bakery

The perfect spot to grab an ice-cold margarita, hence the restaurant’s name! Chef Juan Hernandez brings a mixture of Colombia and Mexico to his pan-Latin fusion spot on Cheshire Bridge. The true winners here are the variety of drinks served up to guests, including their shots, flights, and cervezas (beer)! Don’t forget their Sunday Brunch with unlimited eats and drinks during brunch hours! It’s a deal that will drive you loco! 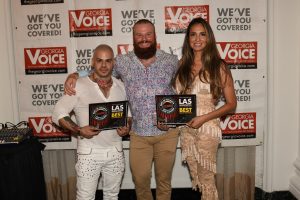 Runners-up are Zocalo and La Hacienda

There’s something about enjoying a chilled cocktail on a beautiful patio in the heat of the summer! Roxx Tavern delivers a unique patio dining and drinking experience like no other, with lush greenery, fans to keep guests cooled off, and a wait staff working hard to give you the best experience imaginable! Expect Friday’s, Saturday’s, and Sunday’s to be packed with a very LGBTQ crowd!

Located near the central point of gay Atlanta, Campagnolo offers up a true taste of Italy, and don’t think they won’t try to take you to the hills of Tuscany! Their menu entrees read mostly in Italian, giving guests the ultimate experience! Once you’re full from a romantic dinner, the bars of gay Midtown are right around the corner! Like many high-end restaurants, Campagnolo’s menu changes often, so our advice is to visit as often as possible! 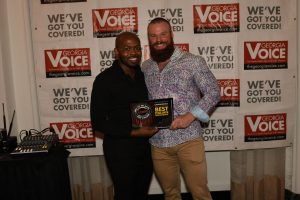 Runner’s up are La Tavola and Nino’s Italian Restaurant

In need of your Latin dish fix? Las Margaritas gives you a wide variety of entrees like Chilaquiles and Chimichangas, plus food fare from the streets of Colombia! After traveling across Latin America, Chef Juan Hernandez knew he wanted to create an atmosphere to take his guests on a unique food journey! Pair any cocktail on the expansive menu with an entree and you’re on your way to the ultimate fiesta!

Chef Deborah VanTrece uses a lot of her soul and delicious food to create the most romantic atmosphere for couples across Atlanta! Her southern-inspired entrees and craft cocktails concocted by expert bartenders give guests a chance to explore what’s to love about food and drinks! Opening in 2016, the restaurant owned by openly lesbian chef, VanTrece, is an avid supporter of the LGBTQ community in Atlanta! One more reason why this restaurant is the Best Of for 2019! 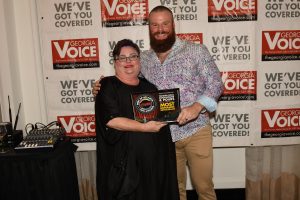 Runners-up are Campagnolo and Floataway Cafe

There’s something strange about not eating meat, but at Cafe Sunflower, expert chefs allow you to indulge in other delectable treats without breaking the bank! For over 20 years, the restaurant has introduced guests to the art of plant-based cooking. With locations in Midtown and Sandy Springs, vegan is always on the list for a quick, healthy lunch or dinner!

Runners-up are Kale Me Crazy and Herban Fix

You could feed a handful of guests with just one plate at Eats on Ponce, and at a great price as well! It’s the third consecutive win for Eats on Ponce as the big portion cafeteria-style servings don’t break the bank! A meat and three sides cost guests about $12, including a slice of good ol’ southern style cornbread! The interior is unique as well with hundreds of license plates from around the country covering the restaurant’s walls!

Burgers are made for devouring, and Grindhouse Killer Burgers gives you the perfect place to do it, no knife needed! The joint was created by Emory Graduate, Alex Brounstein, back in 2009. Five locations including, one at the Atlanta Hartsfield-Jackson International Airport, give guests a little taste of the South! One must-have: The HillBilly Style Burger topped with pimento cheese, jalapenos, brisket chili, and onions! Your tastebuds will thank us later!

Runners-up are Roxx Tavern and The Vortex Bar & Grill

Take a bite into a slice of heaven at Fellini’s, offering up pizza in all sizes and flavors! With seven locations across the Atlanta metro, this decades-old pizza shop sits next to La Fonda Latina, a unique take on Latin cuisine. Both are owned and operated by Mike Nelson and Clay Harper, and the close proximity of the restaurants gives guests the ultimate choice between Latin and Italian! But for this award, we’re calling Fellini’s the big winner!

Find the rest of this year’s winners here.