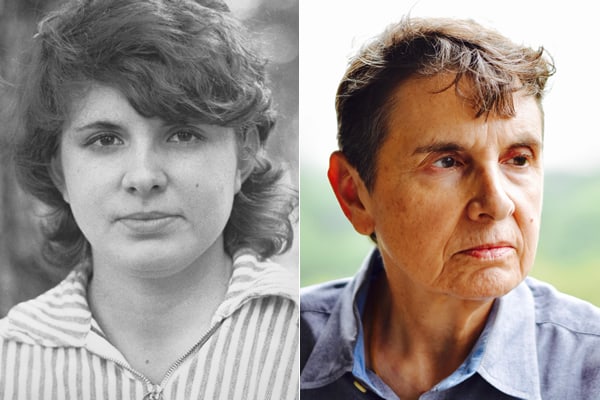 Stonewall wasn’t bloody enough to be considered a true riot. That’s the contention of one activist who went the second night to see the brouhaha she’d heard about first hand.

“I’d prefer to call it a rebellion or an uprising,” says scholar/author Karla Jay. “A riot is more bloody with fighting in the street.”

Jay was born Karla Jaye Berlin in Brooklyn to her parents Rhoda and Abraham Berlin in 1947. She was raised in a non-observant, largely secular Jewish home and graduated from Barnard College in 1968 after participating in the student demonstrations at Columbia University.

She’s a distinguished professor emerita at Pace University in New York where she taught English and directed the women’s and gender studies program from 1974-2009. She’s considered a pioneer in the field of lesbian and gay studies and is author of books such as “Out of the Closets: Voices of Gay Liberation,” “Tales of the Lavender Menace: A Memoir of Liberation” and won Best Lesbian Studies Book in 1996 for “Dyke Life: From Growing Up to Growing Old — A Celebration of the Lesbian Experience.” When asked to confirm her sexual orientation, Jay says she eschews labels.

Jay became involved in her activism by participating in various movements such as the peace movement, the women’s movement and the movement against the war in Vietnam. Although her views aligned with the left, she ran into issues.

“The problem with the groups on the left were they were pretty homophobic and the people who were involved, like myself … had to basically compartmentalize our lives” Jay says.

Their lack of inclusion pushed Jay into the forefront of fighting for the rights of LGBT people, which started with the Gay Liberation Front and the Stonewall riots.

Contrary to popular belief, films documenting what took place at Stonewall with real footage are inaccurate according to Jay.

What is known about the events is that on June 28, 1969 the New York City police department went into the Stonewall Inn in Greenwich Village for what they expected to be a routine bar raid. Things went “wrong for the police” when several patrons at the bar refused to go quietly into the police wagon.

“It was time for society to decriminalize our lives. That’s what happened at the Stonewall” Jay says.

Before Stonewall, New York gays were routinely humiliated, scrutinized and arrested solely for being themselves, especially in the bars.

It was no surprise to Jay that an event like Stonewall happened. What made her know things were going to be different were the responsive actions of the Gay Liberation Front.

A common question that pops up when hearing about Stonewall is what started it all? Some say they threw the first brick while others say they threw a shot glass. According to Jay, neither of these is what the historic moment was about.

“It had to do with a routine police raid, police pay offs, anger at police pulling them aside, stripping them, arresting them for their clothing,” she says.

Another important piece Jay points to is the “context of other historical acts of defiance.” At this point in American history, several other acts of defiance had happened across the country including the Montgomery bus boycotts, the March on Washington and the draft resistance.

“Events do not happen in isolation,” Jay says.

Although there is no doubt that a sense of change and rebellion were in the air during the 1960s, there are quite a few disputes about what happened at Stonewall.

The first misconception is that the Stonewall events were violent.

“When I went down there the second night, the door was still intact, the windows were still intact,” she says. However, she does not diminish its importance saying, “it was a rebellion.”

Second, is that the death of beloved actress Judy Garland sparked the rebellion.

“It did not happen because people were so upset about (it),” Jay says.

The last major misconception Jay addressed, which may explain the questions people have about Stonewall, is how many people place themselves in the action.

“I think people want to be recognized and we all want to see ourselves in the heroism of everyone that stood up,” she says.

Regardless of the blurred lines, Stonewall’s significance can’t be overstated. It led to a new way that people presented themselves based solely in pride of who they were.

This newfound sense of pride was soon followed by an organized movement called the Gay Liberation Front. Jay says it “changed everything …we changed the culture.”

It was comprised of a mixture of identities standing up for what they believed was right and decided to push for legal and social action.

“It made it a wonderful kind of group for a new movement because the old movement didn’t really welcome all these people, particularly trans people. It was a new wave with new beginnings of radical resistance to oppression,” Jay says.

This new wave of resistance left its mark on the world and since then has trickled down into the movements of today like Gays Against Guns and the ever-growing dyke and trans marches.

“We are on the cusp of a new era of taking to the streets” that will eventually grow into a “new wave of radicalism” that will address the legal backlash the LGBTQ community is facing,” she says.

In light of all the movements that are pushing for social change, some institutions have thought to address their involvement in harassment against LGBTQ people, including the New York City Police Department.

According to the New York Times, the commissioner, James P. O’Neil, said, “The actions taken by the N.Y.P.D. were wrong — plain and simple.”

Jay thought the apology was “a great first step.”

“I want to know what are they doing to protect our community now in a different and meaningful way, particularly that trans population. Your apology means nothing without concrete action,” she says.