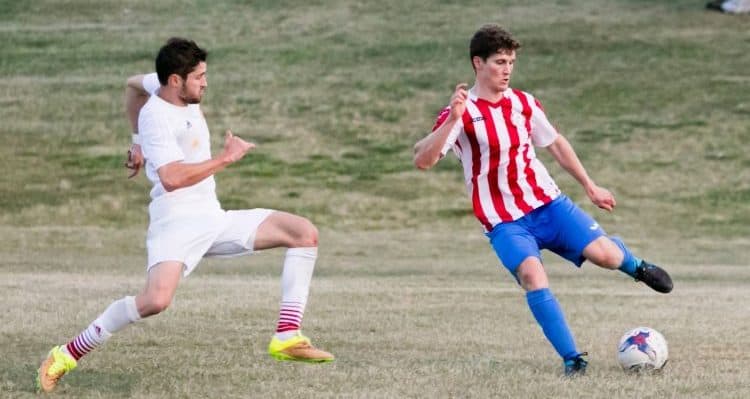 When Adam McCabe, a midfielder for our very own semi-pro soccer team The Georgia Revolution FC, takes the field this season, he’ll do so as a renewed man. For one, he’ll have a boyfriend cheering him on. He’ll have the satisfaction of a blossoming sales career off the field. But best of all, he’ll be able to take pride in the knowledge that as an out athlete, he’s setting an example for fans looking to see someone like themselves in the athletic spotlight.

The Atlanta-born, Tallahasee, Florida-raised former oversees professional player has joined the wave of out athletes, coming out in a poignant first-person essay published online this past December. In it, he detailed years of confusion and isolation as he struggled to balance the first love of his life – soccer – with his burgeoning identity as a gay man.

“It was a mix of me trying to define myself even further – yeah I played soccer and I had a full-time job and I had my boyfriend. Life is great – but there’s got to be more,” McCabe said of his decision to come out. “I thought, ‘How can I impact Atlanta? How can I impact my community?’”

It was a 180-degree shift for McCabe, who spent two decades hiding in the super-macho arena of pro soccer. That world, he said, consisted of hetero-focused locker room banter and anti-gay jokes that made it very clear he was not in a safe space to be out and proud – especially when he was playing in Europe.

The pressure of hiding eventually got to him: In March 2015, after stints in England, Thailand and Slovakia, McCabe became disillusioned with the game and moved back to the states, landing in Atlanta. It was here, while playing on a local team, that McCabe made peace with his identity and decided to make his sexuality public.

Now, in addition to soccer player and blossoming LGBT advocate, McCabe, 25, is proud to add role model to his resume.

“I just thought, if the 19- or 20-year-old Adam had someone he could have reached out to about being gay, I think I would still be playing professionally overseas,” he said. “I thought, I didn’t really have that person, maybe I can be that person.”

Life has to be pretty busy for you right now. What do your days look like?

I’m working full-time for Hershey’s Chocolate, in sales and merchandising in the healthy snacking division. Georgia Revolution just started back up, so now until August, I’ll be playing with them. I’m also doing some travel to Israel.

This is in addition to some work you’re doing in the LGBT community?

I’m part of RainBros, an LGBT peer mentoring group, helping in the health and fitness element. My other project concerns the Atlanta United MLS [Major League Soccer] team here. I went to the first game with my boyfriend and there was a lot of homophobic language said by our fans. I’m in the final processes of writing an article about my experience as an LGBT fan at the games and how there’s still mountains to climb in Major League Soccer. I’m writing this article in part to reach out to Atlanta United to see if they can consider a Pride night.

Take me back to where you started – how did you get to this point?

Growing up, I was accustomed to homosexuality being looked down upon, so for me, the focus was all on soccer. I never really dated much. Then, when I went to a liberal arts school [Vassar College] and started getting hit on by guys, I realized I liked it. It scared me in a sense, so when I left to go play professional soccer overseas in England, part of it was running away from my sexuality.

When one thinks of super macho sports, soccer doesn’t first come to mind. Is it truly that heteronormative of a sport?

In Europe, it’s seen as more macho. I was in England, which is one of the harshest and most macho countries for soccer. It’s known for being very physical and in your face. I definitely didn’t feel I could tell anyone just because of the way my teammates and coaches spoke.

You played from 2011 to 2014 before an injury ended your time in England, but you went on to play in other countries. Was the environment for gays any better?

I went to Thailand and played for a few months, then to Slovakia. I was kind of searching for a place where I could be myself and be out and open and play professional soccer. But I kept on finding myself even more locked away. In Slovakia, I hit a breaking point. I lost my love for soccer. All I was thinking was, am I gonna be closeted my whole life?

That led you back to Atlanta, where you had your light bulb moment?

I was tired of 23 years of not being honest with myself. I met my boyfriend and he was great about letting me find out who I am. I started playing soccer again and was approached about playing for a team down in McDonough [The Georgia Revolution]. I started feeling more comfortable with myself and was ready to give back to the community.

Why do you think so many athletes are hesitant to come out?

The reality is a gay athlete still knows that even though people say they wouldn’t have an issue with it, there still is this huge unknown. There’s so much media attention that would come with coming out – that scares so many players from doing it in their prime.

What, then, has made it worthwhile for you?

I’ve had one professional athlete come out to me right before I came out and also have heard from people across the US telling me I’m giving them courage. It’s nice to know that you can kind of help people, but also give them some hope for their future.