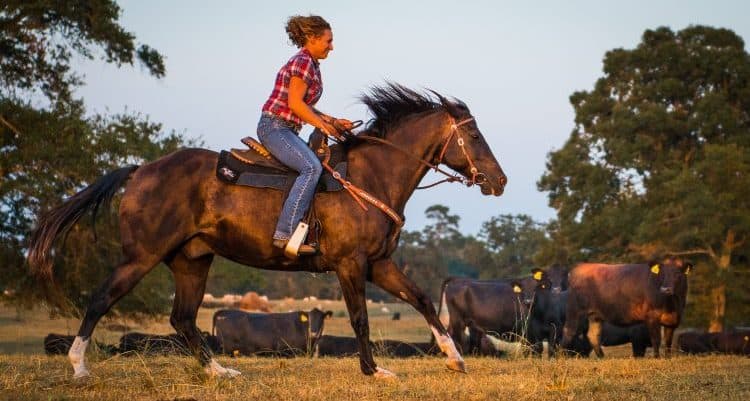 The Peach State has a lot to offer in the way of staycations. But for a different type of getaway, Georgia is home to destinations that put visitors a little closer to nature: farms.

“While I’m not sure when we can claim the ‘local food movement’ … truly kicked off, one thing that I do know is that folks are more interested in their food now than ever before,” said Caroline Lewallen, agritourism and marketing coordinator at Jaemor Farms in Alto.

Agritourism is a combination of the state’s top two industries, agriculture and tourism, and as of 2016 boasted an estimated $142 million in economic impact, according to the University of Georgia. Whether it’s a drive down I-75 to the historic Georgia Museum of Agriculture, a jaunt down one of the state’s Georgia Grown agriculture trails or even a horseback ride through a working farm, the relatively new term is full of possibilities for Georgia farmers and tourists.

“It’s sort of a gateway or entry point for the consumers to come out and actually step foot on a farm and see how the crops are grown, and see firsthand where their food comes from,” said Jake Carter, owner of Southern Belle Farm in McDonough. “Everybody’s got to eat and it’s a great way to educate your kids while having a good time.”

Live with the livestock

The Reeders got into alpacas, a type of livestock raised for its fiber, about five years ago.

Farm tours at Apple Mountain include meet-and-greets with the animals, plus learning about their life cycle, how they’re bred and the fiber they produce. And, if the trip is timed right during April, agritourists can observe the alpacas getting their annual haircut, called shearing.

“We want people to be able to come and learn about the alpacas and get hands-on,” Reeder said. “It’s one thing to call and talk about them, but if you can actually come touch them and squeeze them and love on them, we wanted to open it up to that side of thing so there’s more possibilities.”

The next step for Apple Mountain Alpacas is an on-farm store, full of goods made from the Reeders’ alpaca herd fiber and some imported from Peru, where alpacas originate from. Reeder also said she plans to offer classes to teach visitors how to use alpaca fiber.

Farm workshops are also a feature at White Oak Pastures in Bluffton. White Oak is home to beef, pork, lamb, goat, rabbit, gees, guineas, ducks, turkeys, chickens and a host of produce. Jodie Benoit, agritourism manager, said it’s been in her family since 1866. White Oak first started offering $10, hour-long walking tours several years ago, and as people’s interest in knowing where their food came from grew, so did the demand for farm visits. Now, in addition to the walking tour, there’s a horseback tour and lodging. Overnight agritourism at White Oak is more suited to couples or families with older children, as much of the tour is self-guided through the working farm.

“You wouldn’t think that people would want to come spend the night in Bluffton, Georgia, but you’d be surprised,” Benoit said. “They do get to engage with our employees while they’re working. They’ll catch our beekeeper out with the beehive and pick his brain. Nothing’s really restricted to them, but we do ask [that] they don’t partake in the labor.”

Pick a peck of produce

Lewallen’s farm is no stranger to agritourism — Jaemor was a farm stop since Interstate 985 was paved in 1981.

“Because shopping at Jaemor is an ‘experience,’ we’ve always been an agritourism destination, even before the term came into use. We have hosted school groups in some shape, form or fashion at Jaemor for some 20 years,” she said.

In addition to its regularly open farm market, where visitors can take home produce grown on the farm and from other Georgia producers, Jaemor offers special event pick-your-own days in the spring and summer, plus a fall corn maze that runs from September to November.

Carter is the fifth generation to farm his family’s property in Henry County. The farm went from row crops to a dairy and now has beef cattle, hay and plenty of opportunities for families to pick their own fruits and berries. Southern Belle Farm also offers a farm market and fall corn maze. There are also plenty of kid-friendly things on the property, including hay rides, a cow train and pedal cars.

“We decided to open the doors up to the public in 2006,” Carter said. “We have our spring season, which involves you-pick strawberries. Eight acres; folks come out and pick their own fruits. We go from strawberry to blackberry, blueberry and peach, which starts Memorial Day weekend.”

No matter what type of farm Georgians want to visit, Carter said the important thing is to actually talk with farmers and get information straight from the source — not alternative facts peddled on the internet. Lewallen echoed his sentiments.

“We believe in being transparent, having conversations with consumers about their food and food choices, and agritourism opens the door to have dialogue with our customers,” Lewallen said. “We would not still be farming if it weren’t for them.”