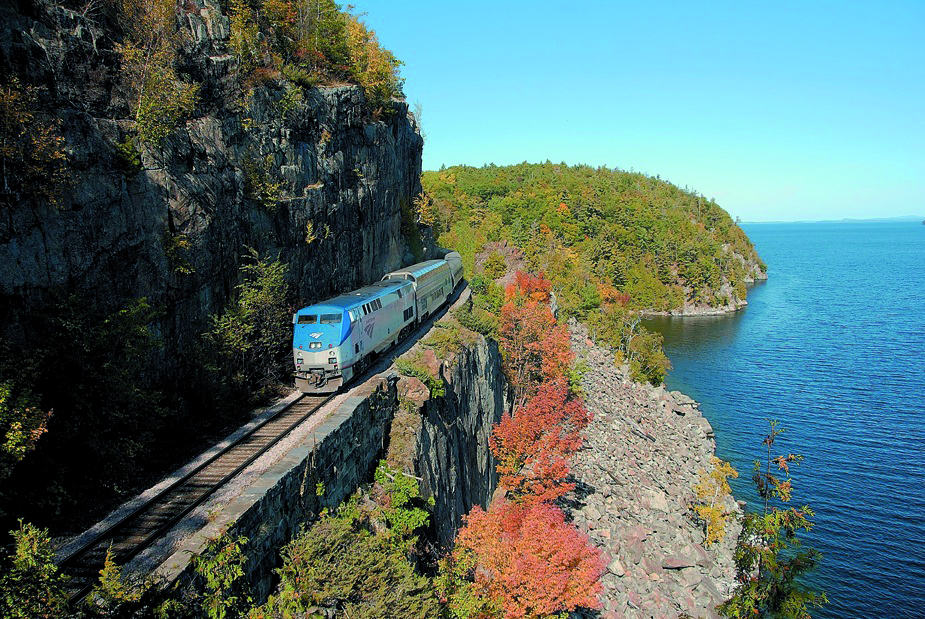 There was a time when travel was romantic; those about to embark on a trip often donned their best clothing while service providers pulled out all the stops with freshly prepared meals, cocktails and entertainment. Those days are long gone now that airlines have turned their focus to simply moving as many bodies packed in as tightly as they can, but if you have time on your side, the romance of travel can return this summer.

There are many who argue the romance of train travel never fully disappeared. We don’t have hoop-skirted women waving handkerchiefs on smoke-filled platforms anymore, but the promise of vast swaths of beautiful countryside still remains.

Vidalia resident Holly James has been traveling cross country by train with her wife four or five times a year since 2007. For her, train travel is all about the relaxation of a slower pace.

“There is something so therapeutic about the click-clack of the train as it barrels down the tracks,” she told Georgia Voice.

“Sleeping car passengers receive complementary meals in the dining car, may bring alcoholic beverages on board with them to drink in their compartment and may make use of the business class lounges in major stations prior to departure,” he said.

Planning a vacation with overnights on the train means there’s no need to book an expensive hotel for a one-night destination.
For those willing to spend a little money, an inclusive train package can be a vacation unto itself.

“Many of my older clients love taking the Rocky Mountaineer across the Canadian Rockies. It’s a beautiful route through the mountains, but it can get expensive. High-end train packages can run into the thousands for some routes,” said Andrea Oppenheim, who owns and runs Find

A Pearl, an Atlanta-based travel agency.

Still, she said, train travel can be very affordable on some trips, especially when traveling in Europe, where train stations are often conveniently located in the center of historic districts and very easy to get to.

Oppenheim also notes that travel for LGBT families seems to be a bit easier in Europe.

“Maybe you get singled out as an American, but not as much because of your sexual orientation,” she said.

But, more traditionally conservative parts of America are becoming more LGBT-friendly, “and it’s more of a norm, and I’m seeing the same thing in travel.”

When choosing a location, James recommended starting out West because tracks tend to be smoother there – and to not miss out on the food (especially the tamales at the Albuquerque train station). For those looking to travel directly from Atlanta, the New Orleans to Washington, DC Crescent Route makes stops there. James recommends this particular train because “crossing the bayou with the track mere feet above water makes for excellent wildlife viewing.”

Train travel isn’t without challenges, though. In America, Amtrak doesn’t own its own tracks, which means they could be subject to delays as freight trains often have supremacy in being assigned tracks. To pass the time, trains often have wifi, and electrical outlets at seats are nearly universal – and there’s always a dining and bar car that’s worth visiting.

Even with the possibility of short delays, taking the train removes the anxiety most of us face when traveling.

“While I do fly, after a series of frightening mishaps on airplanes, I like knowing the train is a viable way to travel should my flight anxiety become an issue,” James said.

“I enjoy writing and drawing, and the landscapes available to the train passenger are unique and inspiring; in some locations, it may be hours before another paved highway crosses the path of the locomotive,” she said. “Environmentally speaking, it leaves a lower carbon footprint than an airplane.”

Compared to purchasing airline tickets, train travel can often get expensive, but there are deals to be found – especially for planners.

“Amtrak fares increase based upon demand as the travel date approaches,” Goldstein said. “Booking non-flexible ‘saver’ or semi-flexible ‘value’ tickets can potentially save you hundreds of dollars.”

For many, though, the cost of the train ride more than pays for its charm and simplicity. Rolling through the countryside, watching the world pass by and taking the time to simply enjoy the journey is exactly what train travel is all about, James described.

“The sounds of the train at night are especially soothing,” she said. “The lone whistle in the middle of the night, seeing the stars with no light pollution – it’s magical.”

Interested in hopping on board a train for your next trip? Check out these tips from train lover Adam Goldstein: