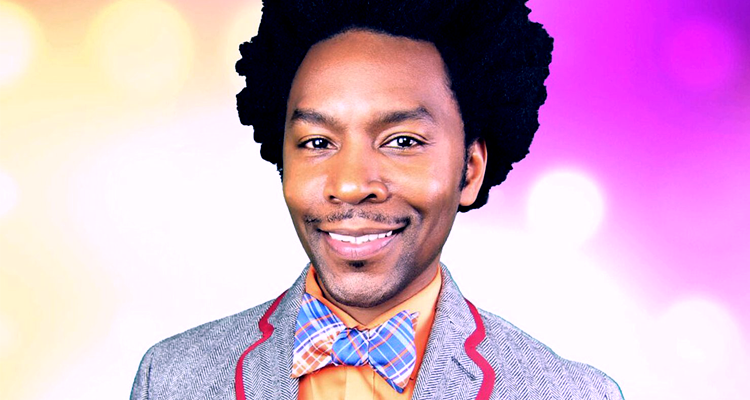 A Conversation About Being Black and Gay with Corey Andrew

Following the death of Sydney Poitier, the first Black man to win the Best Actor Oscar, my friend Corey Andrew posted this reflection on his Facebook feed:

“… I’m reminded of an audition I had years ago for the role of a Black troubled teenager, and after I read for the casting director, she said, ‘Can you do it again, but be more Black?’ I was perplexed, as she continued, “I need more Black, like thug, murderer, drug dealer—black!’ In that moment, I realized racism was more than I had experienced in my young life, because for me, in the home I was raised in, being “more Black” meant to ascend to the eloquence of my mother who worked in higher education, and the meticulous articulation of the likes of Sidney Poitier, Harry Belafonte, Diahann Carroll, Cicely Tyson, and my neighborhood of prominent Black politicians … one of whom today is a member of Congress. “More Black” means excellence where I come from. R.I.P. Sidney Poitier, and thank you for your class, talent and — sheer excellence.”

I had the pleasure of talking with Corey more about this post and what being Black and gay means to him.

Your tribute to Sidney Poitier really struck at my heartstrings. You talked about the gift of growing up in a multigenerational home, and the kind of heroes you had as a kid. Tell me more about that.

Thank you very much for your interest. My mom invested a lot of time in me as a child. As soon as I could form words, she started me reading. She worked in higher education, and as a single mom, she was a terrific role model, with education being her most coveted dream for me, teaching me that the ability to communicate effectively was aligned with great power.

When I was around 13 years old, my great-grandmother, born in 1907, came to live with us a few years before she passed. She had raised 11 children, some during the Great Depression … One [died] due to illness, but the others lived fulfilling lives and had their own families. That is the heroism that shapes me today.

Beyond that, my neighbors and elders where I grew up were beautiful, regal African Americans, primarily educated. However, even those with little education were still successful and owned multiple thriving businesses. Our neighbors and close friends, a few houses down, were a prominent Black political family named the Watsons, and the entire community looked up to them.

The elder, Mr. Watson, was the State Assemblyman of New Jersey, and I was at his home every day because I went to school with his grandchildren, and we were close friends. It was incredible; on any given day, Reverend Jesse Jackson or Mayor Dinkins might just pop up at the Watson house, and I’d unexpectedly be in the presence of Black excellence and civil rights icons.

Today, Mr. Watson’s daughter Bonnie Watson-Coleman is a New Jersey Congresswoman. So, you see, for me growing up, these were my examples of what it meant to be Black. These were my local heroes, and Black represented excellence.

Who were the cultural role models for you when you were growing up? For me, it was Cary Grant, the epitome of class, dry wit, and sophistication. I imagine Sidney Poitier played a bit of that same model for you as well.

Yes, I absolutely loved Sidney Poitier and Harry Belafonte because they were both so handsome and beautifully spoken, such class all the way. But also Diana Ross left a big impression on me when I saw “Mahogany” as a kid, and my obsession with Josephine Baker continues. I’m certain the only reason I traveled to France was that I had fallen in love with Josephine Baker’s love of France, so I wanted to see it for myself.

Then there’s also Maya Angelou and James Baldwin, so many role models, too many to list. My mother was a fan of the show “Julia” in the late ’60s with Diahann Carroll, and I was named after the character of Corey, Julia’s son. Diahann Carroll was definitely a role model.

You’re an accomplished singer; who were your influences?

So, this is where the cross-generational household shapes my creative sensibilities. My mom was a phenomenal gospel singer, but could sing anything, and her albums were all the old Motown classics, Aretha and the ultimate — Mahalia Jackson. But because of my aunts and uncles, as a kid I listened to Miriam Makeba, Jimi Hendrix, Parliament, Bootsy Collins, Nina Simone, Minnie Riperton, Olivia Newton-John, and of course, whatever disco records were out at the time.

As I moved into preteen years, I was a serious post-punk New Wave head, obsessed with Kate Bush, Grace Jones, and bands like Altered Images, Berlin, Missing Persons, Les Rita Mitsouko, and of course Duran Duran.

That said, my style as a singer-songwriter is mostly shaped by my love of Lionel Richie, Cat Stevens, Gordon Lightfoot, and Dan Fogelberg. These four, hands down, are among my top favorite vocal-songwriting heroes.

Besides your music career [feel free to plug your success, please], you are also the co-host of a major podcast and a writer (which is how I know you). What advice would you give to someone who might have aspirations to pursue similar dreams?

Thanks for mentioning the podcast. I actually have my personal podcast, “Core Issues With Corey Andrew,” and I’m also the Friday co-host on the “Naughty But Nice with Rob” podcast, hosted by fabulous Brit-born celebrity gossip columnist Rob Shuter.

My advice to anyone wanting to get into writing or podcasting is to work on your craft, especially your writing and interview skills. The software is out there and easy to access for creating and distributing a podcast; that’s the simple part. But if you are not skilled at recording, writing, and editing your content, no software in the world can save you.

Creating a personal blog on a topic you love is the most excellent practice. Write articles about the issues and invite someone like-minded to discuss the issues with you in an interview. The transcribed interview can then become a blog post to show how you write and present your opinions. That’s how you can find, nurture and build your audience.

As a gay Black man, what does Black History Month mean for you? Is there intersectionality between being gay and being Black?

I definitely feel there is intersectionality between the two, each with its degree of discrimination, but I always cite one distinct difference: “gay” is not an identifiable trait. Even if you think someone is gay because of stereotypical behaviors, you are assuming. Unless you are told for sure by that person, you don’t know. Many gay men are closeted or hyper-masculine, and nobody knows, so they can choose to be either gay or not in a favorable environment.

Being Black comes with no such option. I walk into a room, and you indisputably know I’m Black and I’m subject to immediate skin color-based biases.

Then, add to the disturbing growing racial divide within the LGBTQ community itself. It can be quite overwhelming, but I remain hopeful that we’ll all ultimately find unity because this divisive shit is exhausting.

Well, I’m looking forward to finishing my first book, called by some “the gay Black version of Devil Wears Prada.” It’s a funny true story of my life experiences behind the scenes working in the most iconic luxury department store in NYC. Just four more chapters to go!

And of course, new music! I have a lot of hot new tracks coming out this year, so please follow me on Spotify to hear all my music past and present