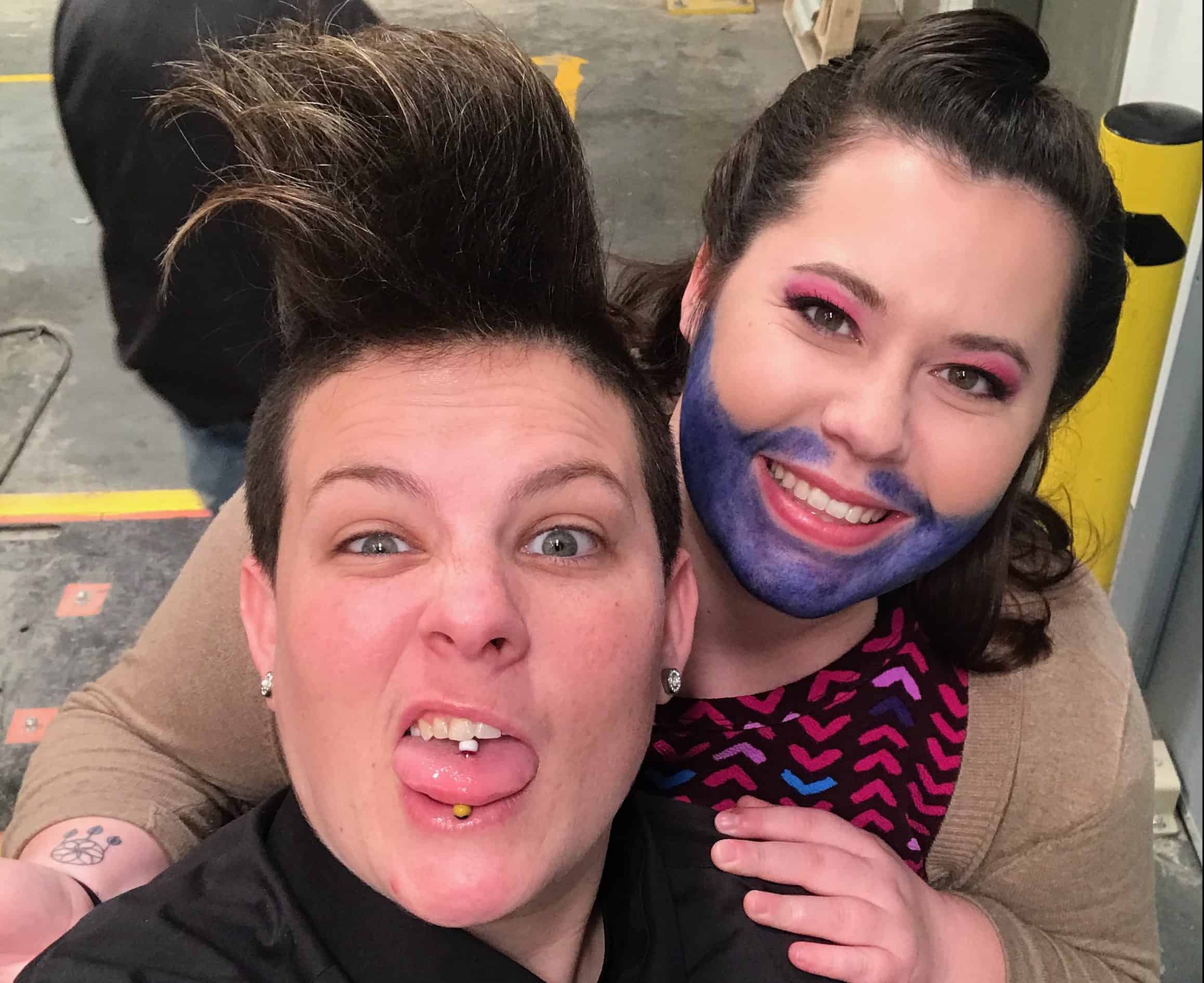 A Look Behind the Lens

Georgia’s most well-known crops are collectively referred to as “the five Ps:” peaches, pecans, pine, peanuts and poultry. It might be time to add a sixth “P” for production. Film, TV and commercial production, specifically, as the state’s industry is blossoming.

“Our industry really took off during the recession,” said Craig Dominey, camera-ready program manager for the Georgia Film Office. “A lot of people who were out of work at the time crossed over into the film industry and have been there since.”

The influx of production crews, creative teams, celebrities, actors and everyone else associated with a shoot means more business in local businesses. Caterers are sought out to bring food to set, dry cleaners are required for frequent costume changes and laundry services. The Georgia Film Office has a Georgia Production Registry where interested parties can list their business, support service or interest in being on a crew, which is then shared with production companies.

Atlanta and Savannah are the cities with the most film appearances, and Columbus and Augusta are becoming more popular as well. But it’s not just the metropolises creative teams seek.
“It’s fun to see these smaller communities in Georgia that don’t see much production suddenly get one of those,” Dominey said.

A field out in Chattahoochee Hills was home to the Wakanda scenes in “Black Panther,” and “The Marks,” a ‘90s-style coming-of-age comedy, was recently filmed in smaller towns around Atlanta, including Villa Rica.

“They were really excited to host us, these small towns, and some of them have these thriving backyard wrestling communities,” Atlanta-based actress Laurie Winkel, who identifies as bisexual, told Georgia Voice. “Some of the small towns were really welcoming and people came out for free to be extras.”

Each of Georgia’s 159 counties has a film liaison, and Dominey oversees that network.

“We’re sort of the staring point for a lot of the productions that are looking to shoot here,” Dominey said. “We do take trips out to [Los Angeles] and let people know about us and connect with folks who are thinking of shooting here or have shot here.”

Most of the time, the conversations begin with a phone call or an email from a production company that’s looking to film in Georgia.

“They may be looking just for Georgia, or various states or various countries, depending on what the script calls for,” Dominey said. “With locations, we try to find areas of the state that would work location-wise for what the story calls for in the TV series or film.”

The Film Office oversees a publicly accessible photo database in which county film liaisons and citizens can upload and share potential locations for filming. Dominey said sometimes the production companies have been through this database and found places, but many times the Film Office puts together a photo package to submit after the initial phone call.

“If it’s a story that is calling for a main location, a swamp, a small town, a farm, we’ll find locations in this database and group them into those categories. So when they open it on their end, they can say, ‘OK, here’s the scene that takes place in the swamp and here’s some locations in Georgia that might work for that,’” Dominey said. “A lot of times they’ll decide to come here with a creative team. … We’ll go around and visit some places. Hopefully based on a trip like that they decide we have the total package creatively, and the incentives and the other amenities, and they decide to shoot the project here.”

That’s precisely what happened to Atlanta resident Martha Barnes, whose late mother-in-law’s house was scouted in Conyers for use in “Just Mercy,” a movie about Alabama lawyer Bryan Stevenson, who defends wrongly accused inmates, or those who can’t afford legal representation. Stevenson is portrayed by actor Michael B. Jordan, and Barnes’ residence was his home in the film.

“This gentleman called us; he was a scout who looks for places for the movie industry and wanted to come out and look at it,” Barnes said. “He came out and then came back a second time and brought people who were a little more influential in the film.”

She said they spent more time measuring the entirety of the home than they did filming inside of it — the camera crew was there for only a day — and used much of what was in the home as its furnishings in the movie.

“We’re very interested to see how [the movie] comes out,” she said “It’s a beautiful house.”

Hayley Lathem and her fiancée Elisa Atkins, both Augusta residents who identify as pansexual, got to work on-location and on an indoor set as extras in the DC-inspired series “Doom Patrol.”

“It’s actually surprising they did so much to change the city street. It was more just structure that was there and everything else was so different than what it looks like in normal life,” Lathem said. “The staging and the set inside was so cool because you would walk from one set to another and see literally the inside of whole houses in the building, and you come out of that set and you realize you’re in a warehouse. Think of two or three Wal-Marts built together with nothing in it, and that’s how huge it is.”

One of Atkins’ friends worked on the Netflix series “Stranger Things” and got a casting email asking for same-sex couples, which she forwarded to Atkins and Lathem.

“When we applied, they were looking for same-sex couples and drag kings and queens, and I’m also a drag king,” Lathem told Georgia Voice.

“We just got to hold hands the whole time,” Atkins said.

They also got to kiss on-screen.

“It was kind of cool to know that I didn’t have to change myself or who I am to fit ‘society standards,’ and that I could just be myself,” Lathem said, adding that she also got to help teach the series’ makeup team how to transform someone into a drag king. “The makeup artists that were doing this and setting it up and giving us all of our makeup did not understand the difference versus drag kings and drag queens. I got to show them pictures of what I looked like as a drag king in the real world versus them trying to put makeup on me to make me look like a drag king.”

She and Atkins agree that meeting other extras, and those with larger roles, is their favorite part of being in the industry.

“A lot of people do this for a living, especially in Atlanta, because the Atlanta film industry is so huge. Just meeting how down-to-Earth these people are, even the cast and crew, the celebrities,” Lathem said. “It’s so cool to know like, I’m sitting next to Brendan Fraser in several scenes or Matt Bomer.”

Winkel is one of those who act full-time. She’s been in a number of true crime shows “getting murdered left and right,” but has had several co-star appearances, which have 10 to 12 lines, and even the leading role in “The Marks,” where she gets to be a wrestler.

“I think every actor wants an experience where they have to learn a whole new skill,” Winkel said. “Indie films sometimes you get to really stretch your talents and like, be a wrestler. They can sometimes be more adventurous.”

Her true crime roles could also be described as adventurous: “I’m like the red herring; the younger woman who was having an affair with the guy who died and maybe I did it. I did wear some really ridiculous ‘80s lingerie and lounged around in silky red pajamas,” Winkel said.

One of her most unusual projects was a show called “Snapped: Notorious,” which was a mini-series about the BTK Killer.

“They had to tie me up in like, scantily clad underwear and I was basically hog-tied. There’s a very capable stunt coordinator on set, but it was a very vulnerable position to be in. We had several positions where I was being choked or thrown or being thrown to the ground, and at one point there was a bag being put over my head,” she said.

Winkel’s also been cast in the show “Dark Waters,” which required traveling to Miami, Florida, and filming multiple death scenes on a crowded boat in freezing-cold water.

“Be an extra if you have no experience on the set, but leave it behind after a certain point if you want to be an actor,” Winkel said. “It’s not a natural stepping stone to being an actor. … There’s also this myth that if you do extra work you’ll be given a speaking role by accident. It happens rarely but often enough that people take a lot of hope from it.”

She suggested taking acting classes to better skill sets, and learn the business side of acting, as opposed to working minimum-wage for being an extra. She also hinted at looking at other industry jobs like commercials, internal film for companies and voice-overs.

“A lot of actors around here, we’re all like, working toward great opportunities in film and TV, but a lot of us make money doing what are called industrials,” Winkel said. “That’s how a lot of us make ends meet as actors.”

Lathem suggested that folks interested in starting out look to Facebook, which has a number of casting groups, and the websites for various casting companies.

“The Georgia industry is really thriving right now, and for locals it’s a great way to get your feet wet. The level that you can progress there would really depending on what your job and career goals are,” said Becca Burgess, a Los Angeles-based associate casting director, originally from Athens, Georgia. “For a developmental client, Georgia is a great place to start to build a résumé with credits and learn the ins and outs of this business. You can definitely be a full-time actor there, but right now there aren’t a ton of large roles being booked out of Atlanta. It’s definitely happening though, and more guest stars and recurring roles are being auditioned there, which at least gives local talent the opportunity for bigger roles.”

Burgess caught the theater bug in high school, but didn’t want to be an actor.

“I knew that I was wanting to be able to work with actors in some capacity though, and felt like casting would be a good fit for me,” she told Georgia Voice. “I started out on the agency side of things working on a busy TV/film — also known as ‘theatrical’ in our industry — desk before transitioning over to the casting side of production.”

Even in casting, there are multiple facets and departments. Burgess doesn’t work at all with extras, but works with principal casting. That’s any role with a line, which requires an audition process.

“We’ll typically get upwards of 3,000 submissions just for a simple co-star role,” she said. “We’ll comb through all of those, select the actors we’d like to read and then hold those audition sessions until it’s narrowed down to one person for the role.”

Though the film industry can be stressful, and there isn’t always job security, Burgess finds her particular role rewarding, especially when an actor is cast and makes a character shine.
“Finding new talent is also really fun because they’re maybe green, but also so hungry to work and eager to get the ball rolling on their career — it’s nice when you have a part in making someone’s dreams and goals come alive,” she said.