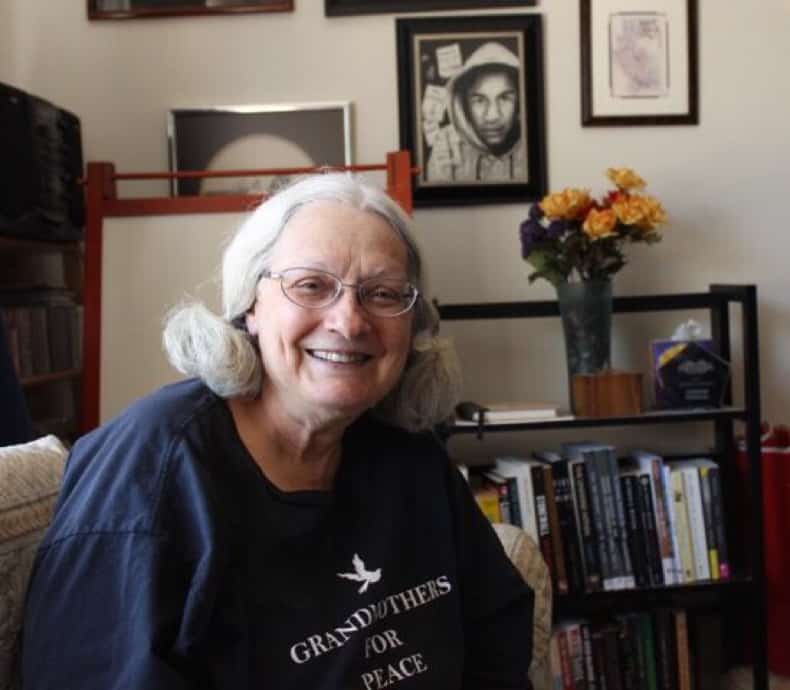 She came out as lesbian in Atlanta in 1971 in the midst of “a radical/progressive women’s community.”

Lorraine Fontana, 68, a native New Yorker, is a veteran queer radical activist who moved to Atlanta in 1968 to work for VISTA as part of President Lyndon Johnson’s War on Poverty. Currently, she is active in many social justice organizations, including the Moral Monday movement.

She’s a founding member of the Atlanta Lesbian Feminist Alliance (ALFA), which created a safe, women-only space from 1972 to 1994, then later Dykes for the Second American Revolution (DARII).

For decades, Fontana has showed up to just about every single pro-equality rally organized in the city, and she can be counted on not only to watch, but also to make and hold up signs, take pictures and post to social media to record the event, and recently has been willing to be arrested for causes she believes in.

I’ve heard a lot about the ALFA house—what was it like to be there?

You can’t really say “the” ALFA house because there were three houses. We wanted to have a women-only space where we could have meetings, events, sisterhood, and invite people there. The first ALFA house was created because a bunch of us were living in a house off Mansfield Avenue [near the Sevananda Natural Foods Market]. This was about 1972 or 1973. That neighborhood back then was very inexpensive. I think we rented the whole house for $125. That house of people decided to break up and then we got the main one, which everyone thinks about when they think of the ALFA house, on McLendon Avenue. It was a duplex. We always managed to arrange to have lesbians living on the other side. I lived there with my then-partner for a while.

Then there’s the sad part of story. We started thinking, “Why do we keep paying for rent? Why don’t we have our own house?” So some women put down payment on a house in Kirkwood. It needed a lot of work. And for the last few years of ALFA we spent so much time trying to get people to help fix it up. The house was usable and we did meet there for a while, but there was never enough energy. Getting a house we thought would give us more energy and a place to build up our library and archives. ALFA closed and we had to sell the house. We used the money to pay off people who made the loans.

What does intersectionality of movements mean to you?

Intersectionality—we didn’t have that term but it was obvious to us those who started ALFA. We always wanted to stay connected to other issues. I’ve always done that. For instance, when in the mid-1980s BWMT [Black White Men Together] started projects in other cities, doing anti-racist work, I worked with them to get passed an anti-discrimination ordinance for bars … in the city of Atlanta. It was clear from the experiences of those in the black community that trying to get into predominantly white clubs they were discriminated against. The bars would triple card people, say this is a private club. I was an ALFA person working with BWMT because I thought it was important. And I would go with a group to gay bars to make sure they were following the ordinance, make sure they posted the policy in the bar.

How did the issue of race become important to you?

Watching the civil rights movement when I was a kid on TV made me feel racism was one of the key problems in our country. And I’ve always really tried to connect those issues.

It is the key issue to me in deciding whether we are ever going to be what our myth of America says we are. Everyone likes to cite the Declaration of Independence and the Constitution, but they [the documents] don’t apply to everyone. They didn’t apply to women, to black people, to Native Americans. That whole contradiction has been with us since the beginning.

What attracted you to Moral Monday?

When Moral Monday came to Georgia, I thought it was wonderful. They had key areas they wanted to focus on, but saw the connections with everyone. They were very into having people talk to each other to work to make Georgia more progressive.

And now you’ve been arrested several times in civil disobedience actions with Moral Monday—demanding the state repeal its “stand your ground” law; demanding the state expand Medicaid; protesting voter suppression; and protesting the so-called Religious Freedom Restoration Act. What was that like?

I felt like I missed out on nonviolent direct action when I was younger [during anti-war, anti-racist, anti-imperialist protests]. I was going to a city college, still living at home, and my parents were already unhappy with me for moving to Atlanta. With Moral Monday, I felt like I now have my chance. I’m retired. I would be willing to do so if there was a cause I very much believed in. I can do it. Some people are still working and some young people don’t want to start their careers with a criminal record.

It’s very privileged when you do a civil disobedience arrest. You’ve consulted with attorneys, you get out every time. We only had to pay bail once. The other times we were let out on our own recognizance. So you’re only in jail from 10 to 15 hours at the most. And you are with other people. What we did see was the reality of the other people who were there. You hear all kinds of stories.