Ala. lesbian beating victim speaks out 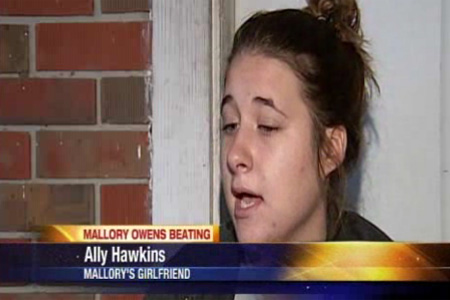 The Alabama lesbian that was brutally beaten during a Thanksgiving dinner at her girlfriend’s father’s home now claims that the attack was not a hate crime.

Mallory Owens, 23, was attacked by her girlfriend’s brother Travis Hawkins, Jr., Thursday, Nov. 22, at the home of her girlfriend.

Hawkins was charged with second degree assault but because Alabama does not include gender identity or sexual orientation in the state’s hate crime legislation, the crime cannot be classified as a hate crime, at least not through Alabama’s laws. The FBI is also investigating the attack and could still recommend that Hawkins be charged with a hate crime under existing federal laws.

“A lot of things have happened between us, but it doesn’t make me hate her brother,” Owens told Mobile CBS affiliate WKRG. “I don’t hate her family at all, or anybody for that matter.”

“It was not a hate crime, at all,” Ally Hawkins said. “We both know the reason why this happened, and it doesn’t make any excuses for him, I’m not defending him at all. I know why he was angry, and that will come out.”

WKRG further reported that Travis Hawkins, Jr. has gone into hiding since bonding out of jail last week and fears for his life after reciving death threats.

“People get a story and go with it, and before it’s over its an entirely different animal,” said Byrd. “ People have taken this and overreacted, and made it something that it’s not.”

Ala. State Rep. Patricia Todd (D-Jefferson) doubles as the chair of Equality Alabama. Todd told GA Voice yesterday by phone that her organization was carefully watching the case.

“I do believe that the officials will do whatever is necessary to make sure the brother is brought to justice,” Todd said. “We’re going to make sure he spends some time in jail. Our primary issue is getting the word out that we are engaged with officials and monitoring the situation. If there’s enough evidence for a hate crime that we make sure it’s done properly.

“At this point, we’re engaged and letting the authorities do their job,” Todd continued. “We’re going to be on top of it. It was terrible, especially on Thanksgiving, to have something like this happen.”