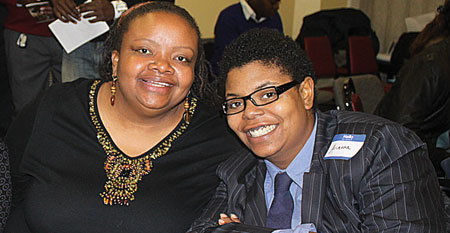 In 2002, the first annual Bayard Rustin Breakfast was held to bring LGBT activists together before the annual MLK March & Rally sponsored by the Africa/African American Renaissance Festival.

It was also a way to honor Rustin, the openly gay activist who worked with Martin Luther King Jr. and organized the renowned 1963 March on Washington. The addition of Audre Lorde, the iconic lesbian poet and author, came several years later.

As the years have gone by, the Rustin / Lorde breakfast, this year on Jan. 16, has grown to some 200 people in a standing-room-only crowd at St. Mark United Methodist Church with roundtable discussions on how to advance LGBT equality.

“People are having the opportunity to set a pronounced focus on what they want to see in social changes. This year we are looking at broad areas — HIV stigma, reproductive justice and gender justice, especially for transgender people who get hit the hardest,” says Craig Washington, who co-founded the breakfast with fellow Atlanta activist Darlene Hudson.

The breakfast’s mission has moved far beyond breaking bread before the march, Washington adds, and is now a place to cultivate leadership and stimulate others who are already doing the work.

“It also honors and fortifies the work for the rest of the year,” he says.

This year marks the centennial of Rustin’s birthday and Atlanta play a key role in celebrating the 100th anniversary of a man many LGBT advocates believe has not gotten the proper recognition in history because he was gay.

Bayard was the “ultimate organizer” and is a hero of LGBT equality who can’t be forgotten, Hudson says.

“People still don’t know who Bayard and Audre are within our own community,” Hudson says. “Bayard had the ability to bring all types of people together. I don’t know if King’s ‘I Have A Dream’ speech would have been heard around the world if it wasn’t for him.”

Both Washington and Hudson say the most impressive aspect of the breakfast is its diversity. Each year, the event brings various people from all backgrounds within the LGBT and straight communities together to discuss issues important to them over a warm meal.

“People come literally to the breakfast table to share and exchange ideas in conversation,” Hudson says. “I keep waiting for Obama to show up.”