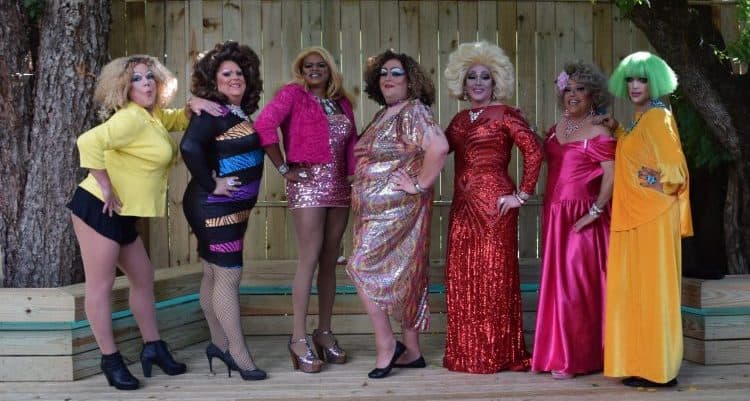 Atlanta's famed camp drag troupe The Armorettes raised nearly $2,700 for HIV/AIDS research and care in one night during a recent show at Burkhart's. Read about how it all went down.

Inside The Armorettes’ wild, record-breaking night of donations

The date was April 9.

It started out like any other night for The Armorettes. The famous drag troupe, one of the longest-running in the country, took the stage at Burkhart’s in Atlanta’s Ansley Square.

But what happened that night was one of the most memorable Armorettes performances to date. In just a few hours, with the help of an anonymous good Samaritan, the drag queens raised nearly $2,700 to donate to HIV/AIDS research and treatment.

The night the stars aligned

“During this show in particular it was actually really busy. We had a lot of our original cast members there and then we had one special guest,” said Kyle Tullos, social media and marketing director for The Armorettes.

One of the audience members upstairs that night came up to an Armorette and told her that during her performance, he wanted to match all donations up to three times.

“Whenever it got to her turn to perform, we had the two hosts say, ‘Hey, we have this offer on the table. This man, who is an anonymous donor, wants to match up to three times what we make. Let’s give as much as you can so we can make as much as possible,’” Tullos said.

That performance garnered $341 in donations, which the man — a pharmacist from the middle Georgia area — matched with a $1,000 gift.

After the show, the man came to the back with his debit card. Using a new digital tipping service The Armorettes started with the Venmo app, he was able to put the money directly into the troupe’s charitable account.

“As I’m helping him through the process of doing the digital tipping he asked us, ‘Hey, if you could do these two songs for my friend who’s here from out of town with me, I will again match whatever you make during that performance,’” Tullos said.

The Armorettes approached Burkhart’s management and got permission to go back on stage. By that time, though, most of the queens were back in their street clothes — except for Sharon Needles, whose original performance that night got the first $1,000 donation match. So back onstage she went.

“The interesting part in this particular time period [that evening] is it’s a transitional time period from people who are 30 or above, which is mostly our customers, to people who are 30 and below,” Tullos said. “The two hostesses were in boydrag. They said, ‘Hey, we have this spectacular opportunity for y’all to learn what we do. … Please donate as much as you can.”

Tullos estimated about 40 people were in the crowd right then, and together they pulled in another $257, which was again matched by the donor. The Armorettes headed across the street to Oscar’s, their usual post-show hangout, to celebrate.

“All of us are over at Oscar’s, just hanging out, and ironically, normally Sharon — who is the one that performed both times for us — goes home. But for some weird reason, she and her husband stayed. We were talking about how amazing it was and how we’ve never had somebody personally donate that much money,” Tullos said.

The next thing they knew, another performer from Burkhart’s was dashing across the parking lot. He told the group there was a man back at the venue who wanted them to perform one more time, and he would again match their contributions.

“We were like, are you fucking kidding me? Are you serious? Literally, all of us completely leave our tabs, our drinks over at Oscars. We like, completely leave all of our shit at Oscar’s and run across the parking lot,” Tullos said.

Again, The Armorettes requested permission to perform, and again, management told them to get onstage. Sharon Needles, still the only queen in drag, got up to perform the requested song.

“This time, the whole bar is filled with hundreds of young people. They’re not our typical audience members, so they don’t know who we are,” Tullos said.

Armorette queen Trashetta Galore said one reason the younger audience doesn’t know who they are is because HIV medications exist.

“People are not afraid of HIV anymore because of the medicines,” she said. “It’s great the medicines are out there, but sometimes it’s hard to still drive home the point that we still need further research and we need a cure. The virus can mutate and there’s still a need to keep the medicines current.”

Knowing that difficulty, Tullos expected maybe a couple hundred dollars in donations. What happened next gave him the chills.

The anonymous donor matched it. In total, he donated $1,926 by himself, for a total of $2,698 — more than The Armorettes had ever raised in one regular show during their 38-year history.

Aiding the fight against HIV

Nearly 40 years ago, six drag queens came together at the former Armory bar to do something for their community after it became clear the government would not.

Despite the darkness of an AIDS diagnosis, The Armorettes wanted to “turn the disease on its head” and use comedy to lighten and brighten the mood. They gave birth to camp drag in the hopes of using laughter to put HIV/AIDS victims in a better mindset.

“They started it in order to not only give money to those people, but also to create a hope throughout the community that just because you have HIV or AIDS doesn’t mean you’re blacklisted or a terrible person or anything like that,” Tullos said.

Even their anonymous donor in April assisted directly in the fight against these diseases.

In addition to donating nearly $2,000 out of his own pocket, the anonymous donor announced to the crowd that anybody who needed help finding low-cost medication, he would help them.

“Not only did he give us money, but he offered to assist them to get medication that evening,” Tullos said. “That doesn’t ever happen. Not only for you to donate a large sum of money, but for you to offer people free or next-to-nothing medication. He was saying to us that he tries to charge people as little or no cost as possible for any HIV/AIDS medication. If you actually look at the cost of Truvada … it would blow your mind. It’s astronomical. That was just — you can’t match that. All the stars lined up that night. We literally had every generation of audience member that night. To have such a donor and to have everybody from different age groups was incredible.”

In the beginning, The Armorettes took their tips and handed them to people in need of medical care. Once it became a registered nonprofit, the troupe started a People with HIV and AIDS, or PWHA fund, which serves as its charitable arm. The $2,698 raised on April 9 is in this fund.

Whenever money is donated to The Armorettes drag troupe during their camp shows at Burkhart’s, it goes into the troupe’s PWHA — that’s People with HIV and AIDS — fund. Tips are collected there throughout the year, and distributed annually.

In 2017, The Armorettes awarded their PWHA funds to five Atlanta-area organizations. SisterLove and Positive Impact Health Centers each received $10,000. An additional $6,000 went to Someone Cares, Inc., which founder and Executive Director Ronnie Bass said was used to purchase HIV testing kits, condoms, lube, sharps boxes for biomedical waste, personal toiletry items for homeless transgender individuals, MARTA passes, food and housing for trans persons. Over the past five years, The Armorettes donated more than $50,000 to this organization, Bass told Georgia Voice.

“The funds received from the Armorettes are a tremendous resource that go directly to helping us support the leadership development of Women Living with HIV. We use the funds to support their participation in policy and advocacy activities, as well as planning and implementing our annual recognition of women leaders who are living with HIV,” said Dazon Dixon Diallo, founder and CEO of SisterLove.

This year the troupe also gave to Poz Vets, which serves HIV-positive military veterans, active duty service members and their families, as well as Empowerment Resources. This group provides low-cost healthcare service and HIV and STD screening and treatment.

“What I really appreciate about The Armorettes is, you as a fan, when you hand that dollar to one of the performers, you can track where that dollar ends up at the end of the year,” Tullos said. “We can say well at the beginning of 2017, we gave $10,000 to Positive Impact and that provides 20 people [pre-exposure prophylaxis] for a whole year.”

He said SisterLove typically puts its donations in clinics or housing programs.

“We’re here, we’re queer and we got your back,” Tullos said. “We want people to know that at the end of the year, we’re going to donate money and we’re going to help treat as many people as possible until there’s a cure.”