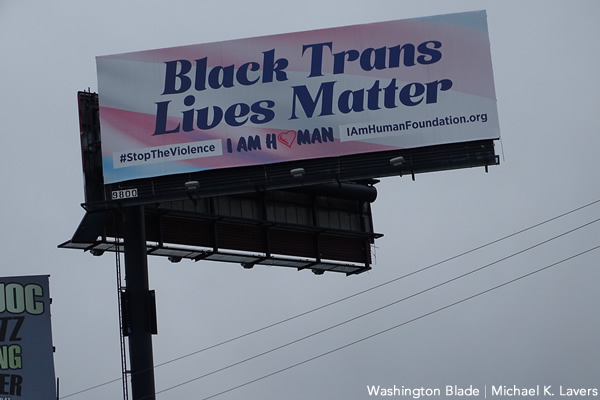 An Atlanta advocacy group has created a billboard campaign that demands an end to violence against Black transgender people.

The I Am Human Foundation campaign debuted in January, and features billboards with the slogan “Black trans lives matter” against the backdrop of the trans Pride flag. The billboards also contain the hashtag “stop the violence.”

Alex Santiago, the executive director of the I Am Human Foundation, on Feb. 21 told the Washington Blade the idea behind the campaign emerged last summer after he attended marches in support of the Black Lives Matter movement.

“There was a lot of conversation back in the summer with the Black Lives Matter (protests) and there was even a divide in the LGBTQ community where they were saying, okay, well are we included in that because, you know, when it comes to cisgender Black people, they don’t include us,” said Santiago, who is also the co-chair of FLUX Atlanta, an AIDS Healthcare Foundation project that serves trans and gender non-conforming people.

“A lot of them don’t feel like we even fit with them, so with the Black Lives Matter campaign there were huge debates about that.”

Santiago said he brought posters in support of Black trans people to the Black Lives Matter protests he attended. Santiago said participants’ reaction to them “was amazing,” but he added some LGBTQ people did question why he decided to participate.

“At first I was like, well I don’t understand why you aren’t supporting it because before anybody knows that you’re gay, before they know you’re trans, they know you’re Black because they can see you, but then I had to think about it,” said Santiago. “But you know what? Maybe we’re not included in that.”

Santiago told the Blade there is “very little trans support” in Atlanta, so he thought about ways to make the city’s trans community more visible.

“I was like, okay, I got to bring awareness to Atlanta that we’re here and that we matter,” said Santiago.

He met with the owner of a local PR agency who is a cisgender woman to discuss the campaign. Santiago said she “was like, oh my God, I think this amazing” and agreed to offer the I Am Human Foundation four billboards for the price of one.

One of the billboards is located adjacent to the University Avenue exit of the Downtown Connector, which is one of Atlanta’s main expressways. The other three are located on Ponce de Leon Avenue near the Ponce City Market and on Moreland Avenue near the Starlight Drive-In Theatre.

The campaign was only scheduled to run for four weeks, but Santiago said the PR agency has allowed the billboards to remain in place as long as nobody else wants to buy the space.

The Human Rights Campaign notes at least nine trans or gender non-conforming people have been reported killed so far this year.

Bianca “Muffin” Bankz, a Black trans woman, was shot to death in Atlanta on Jan. 17. Other trans or gender non-conforming people have been murdered in Illinois, Puerto Rico, Mississippi, Louisiana, Florida and Pennsylvania.

Santiago said he didn’t know about Bankz’ murder until he read about it on HRC’s website.

“I didn’t know anything about it,” he said. “It’s like, how do I not know in my own city that this happened.”

Santiago told the Blade his organization is working on a second billboard campaign that will demand an end to the murders of Black trans women. Santiago said he plans to place a billboard near Atlanta City Hall “because I just feel like … nobody cares.”