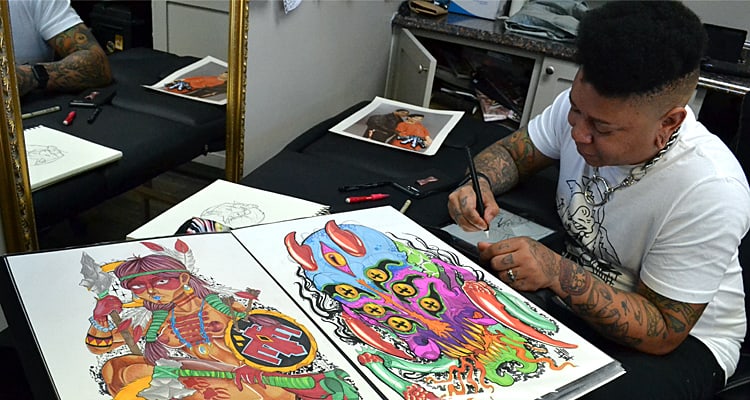 “When I first started coming out and telling people, FKA twigs was my wall,” Parker, who is nonbinary and uses the singular they pronoun, said. “[Prince] was the first person I ever looked up to and I was like, there is a lot to that. That’s my safety blanket. I have my mom on the back of my leg too; that’s my strong point.”

Now a tattoo artist at Royal Ink Studio in Marietta, Parker’s interest in the career began some 14 years ago in their home state of New Jersey, inspired by shows like ‘Miami Ink.’

“We went to the library for like three hours or something and we just sat there and looked at a bunch of stuff and read a bunch of stuff,” Parker said. “It took forever to try and find an apprenticeship.”

Parker spent a few months after high school homeless, but their mother convinced them to move to Atlanta. The final straw? They realized so many of their favorite tattoo shops called Atlanta home.

“I packed up my cat, my skateboard, my guitar and straight came down here,” they said.

“The cooler we can get with it, it’s always a good way to challenge yourself and tell a story about yourself with your own artwork,” Parker said.

Parker is “unapologetically myself”, and because they are up-front about their sexuality and chooses to work in supportive shops, hasn’t experienced much negativity for being nonbinary — though they are aware of other artists and customers who are not treated as positively. They took it upon themselves to help bring other queer individuals up in the industry by taking on LGBTQ apprentices, too.

Before there was a designation of LGBTQ, certain tattooed symbols were a way for those who knew to know each other, tattoo historian Carmen Nyssen said. As tattoo culture evolved in America, particularly in the ‘60s, more artistic elements and custom pieces replaced traditionally monochromatic tattoos.

In Chicago, only one tattoo shop was open at that time — it belonged to Cliff Ingram, a gay man known as Cliff Raven. According to a 2019 Pride month write-up from Chicago’s Great Lakes Tattoo, Raven apprenticed under fellow gay artist Samuel Steward, who went by the pseudonym Phil Sparrow.

Steward was a “sexual outlaw” with “so many identities in an era when homosexuality could land a person in jail,” according to a 2010 New York Times piece. He wrote gay pulp fiction and cataloged more than 740 sexual encounters for biologist Alfred Kinsey’s Institute for Sex Research at Indiana University. He was a college professor until 1954 when he abruptly transitioned to a tattoo artist. After learning one of his freshmen classes had no idea who Homer was, Steward looked to Plan B.

“I wanted to get as far away as I could. That was tattooing. The mysterious and dark side of tattooing attracted me as well,” he recalled in a 1993 interview for GLBTQ encyclopedia.

Steward told Keehnen he took up the tattooing pseudonym partially to protect his identity. He felt his academic colleagues would not have looked favorably upon it.

It was only in recent years that tattoos became more accepted.

Jasmine Maskell, owner of Timeless Tattoo in Atlanta and daughter of famed artist Jerry “Cap” Szumski, recalls a day trip she and her family took to Helen, Georgia.

“People were grabbing their kids from my dad; this burly biker dude and they didn’t know what to do with that,” she said. “Now people come up to you, they ask you questions, they want to know where you got tattooed. It’s a complete shift in attitude.”

Szumski was a revolutionary for Atlanta’s tattoo sphere. His shop opened on Cheshire Bridge Road in 1995 near Ansley Mall.

“I think my dad was always a really open-minded person coming from California. It’s one of those places that welcomes everyone,” Maskell said.

As the culture itself shifts, so have the tattoos. Recently Maskell noticed people turning to tattooing as a sort of catharsis.

“Tattoos as a whole is taking ownership of your body. It’s about being in control of those things. So when you have a trauma, if something happened to you and it wasn’t by your choice, every decision you make after that with your body becomes more important,” Maskell said. “I don’t think tattooing is that for everyone, but I think it is a healthy expression of that.”

Parker and Maskell both see LGBTQ clients request the equality symbol, rainbows, Harry Potter and anime references. Rainbows incorporated into other elements, such as the suicide awareness semicolon and a heart with EKG lines, are also popular.

One design prominent a few decades back was a pink triangle, which Nyssen said is the LGBTQ community, particularly gay men, reclaiming a symbol rife with negative connotations.

“The pink triangle was used in Nazi camps to identify gay men and that was a signal to the Nazis that they could treat them horrifically and do these experiments on them,” she said. “They flipped the script. They said, ‘You don’t get to tell us what this symbol means.’”