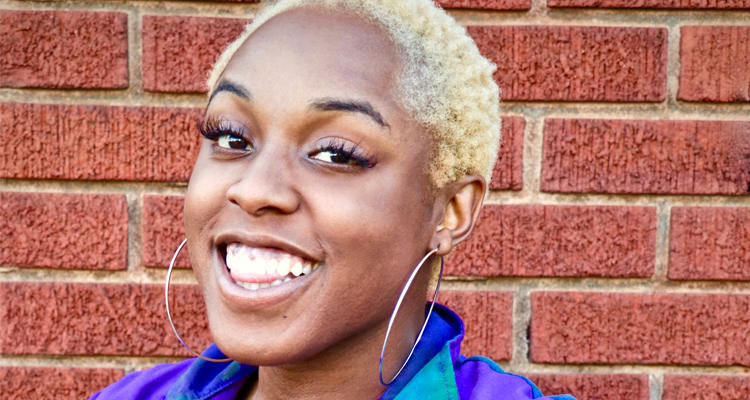 Toni-Michelle knows what she wants and has a plan on how to get there. At least, that’s the impression she gave as she confidently walked into the SNaPCo (Solutions Not Punishment Collaborative) offices in Eastpoint. The headquarters is currently under renovation, but the minute she opened the doors and saw the progress that had been made, she couldn’t hide the joy that lit up her face. This space is a relatively new acquisition to the organization, which had previously shared office space with the Racial Justice Action Center next door, but the Executive Director is excited since her plans will require a lot of room.

The Atlanta native proudly refers to herself as a “Grady baby,” and she’s here to stay. She is a fierce champion for local business, especially in her neighborhood of Eastpoint. “It’s always been my dream to be here and to have an impact on my city … and when I found my passion for activism and advocacy, this is where I wanted to do it.” Even when she was younger and had dreams of being a drag entertainer, she had only ever envisioned herself entertaining here in Atlanta. She puts her money where her mouth is as well, frequenting local Eastpoint establishments and becoming well-known in the community. “The Kupcakery, all the Eastpoint shops … I’m going to run for mayor one day, or city council here in Eastpoint and I’m shooting for the city of Eastpoint to invest in … a restorative justice center.” She admits this is all part of her 10 year plan, but given her drive and determination, don’t be surprised if you hear the name Mayor Toni-Michelle Williams on the news or in the paper someday soon.

But, her dream of making an impact on this city has already become a reality. Most recently, SNaPCo partnered with Women on the Rise, a nonprofit specializing in the plight of incarcerated and formerly incarcerated women, to help close the Atlanta City Detention center. The center had been around since the 1950s and was used as a facility to imprison people who had commited low-level offences like traffic violations. A task force was created last year to try and figure out what would be done with the detention center once it closed, and Toni-Michelle was chosen to be appointed to it.

When asked where she gets inspiration herself, she names quite a few social justice advocates, like writer and feminist poet, Audre Lord and black transgender editor and writer, Raquel Willis. And she added giddily, “I love Whitney Houston! And I love Tina Turner and Beyoncé. I love Lady Gaga and I’m really inspired by folks, regular folks … who are just breathing and committing to loving each other and evolving everyday.” Then she takes another beat, smiles and almost screams, “I’m most inspired by black babies and their joy!”

It’s clear that Toni-Michelle is trusting in the future generations to help create a better world, and she is going to do everything in her power to help guide and shape them.

The work done within these walls is important, and that point is driven home simply by taking a look up and noticing the poster hung up on the wall highlighting a group of trans black women who were murdered in Atlanta in 2015. The poster, which appeared to be for the #SayHerNameATL campaign, is a sobering reminder of what Toni-Michelle fights toward everyday. “When I’m able to support a black trans woman, to build her out and to bring her to safety or co-create safety with her, whatever that looks like to him or them, it’s not even about being proud as [it is] having satisfaction and I’m satisfied with the … role that I’m in to be able to move and shift resources to have that as a possibility [for] me and my folks.”

And as for the future campaigns SNaPCo will undertake, Toni-Michelle states that next is all about mobilizing sex workers. “I’m really excited about shifting narratives and cultures and the culture around sex in Atlanta … how folks are having sex, who’s having sex, how sex impacts all of us, how harm reduction creates better public health.” She’s hoping to end the stigma around sex workers in the city who are being criminalized for, how she puts it, just surviving.

“I am proudest when I am able to look back, literally, like turn around and see or even look forward or around and see my people in their full dignity and resilience and their fight for themselves and each other and that moment has happened in each campaign.”