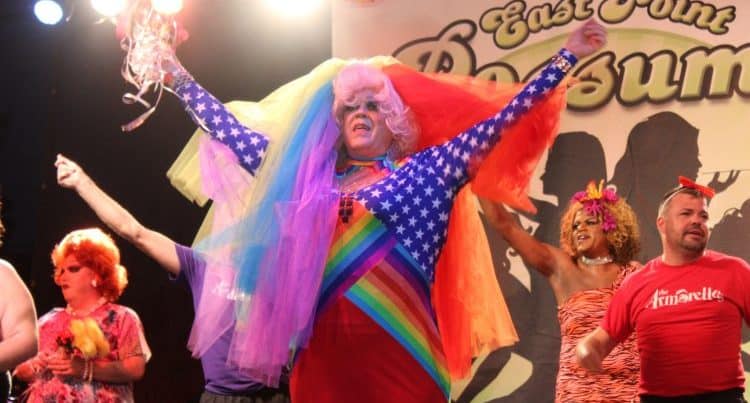 “I don’t think it’s sunk in yet. … I think it will be missed,” Westbrook said. “Everybody has a good time, but when it’s outdoors in June, it could be 80 or 90 degrees. Even if you’re in shorts on an open field, it can wear on you pretty quick.”

Bobby Dukes of Tucker, Georgia only found out about the show last year and said he was heartbroken over the decision to end the East Point show.

“There needs to be more. Move it to a different venue or something,” he said. “I’m hoping that it’s not the last one and it’s just been put on a shelf for a couple years until they can find a new place.”

20 years of drag after dark

The storied history of the East Point Possums began in 1998, when Westbrook, Chuck Jenkins, Chesley Thurman and John Jeffrey each received an invitation.

“A friend of ours threw a Fourth of July party and he wanted everybody to do drag. He wasn’t a drag queen at all, but this was 20 years ago. It was a big thing to put on a dress and walk around and perform,” Wesbrook said. “He set up a little wooden stage in the backyard and his husband put out lights.”

That kicked off a yearly tradition that quickly grew in crowd size — and also quickly moved a month earlier to avoid sweltering Independence Day temperatures for the South’s largest outdoor benefit drag show.

“After the fourth year it, literally, you could not park on the street. There was not room to stand in his backyard,” Westbrook said. “I remember the first time I had to go get a permit from the city of East Point. I had to bill it as a ‘Shakespearian variety show’ because I was afraid they wouldn’t like it as a drag show.”

The show’s come a long way in helping educate Atlanta about the LGBT community. For instance, the East Point police quickly learned that “drag show” and “drag race” are not the same. As for the show’s name, it came from the way Westbrook and Jeffrey were introduced the first time they performed together: they’re not real pretty, so they only come out after dark.

Though not the original intention, the Possums realized the fundraising power of their glittery prowess, and added a charitable arm to the show.

“People just started throwing money at the stage no matter how good or bad the person was,” Westbrook said. “We would take the money back that people donated, and donate it anonymously … but then it grew to $1,000, $5,000 and we couldn’t do that anonymously. It’s hard to just drop that in a bucket.”

The Possums host 20 back-to-back performances on stage, many “doing good work through bad drag.” Westbrook said occasionally straight women even offer their husbands as drag acts for the charity bill.

“It kind of gives you the full monty,” said Michael Howell, who performs as Ginny Tonic. “We have some, shall we say, pseudo-professionals, and then we have people who just do it for the fun of it.”

Howell said his performance at this final East Point Possums event will be Ginny Tonic’s signature rendition of “Looking for a City.” He got involved with the show about 15 years ago.

“I was one of the original Armorettes at the Armory Bar and it just kind of flowed from that,” he said. “It was a great point to come together, the main thing being that we were helping people whose ability to help themselves was extremely limited.”

There are “cute boys in bikinis,” “girls with big boobies,” plenty of booze and guest emcee Rowan, son of Atlanta Pride’s Jamie Fergerson, Westbrook said. His fondest memories of the show include watching kids drag their fathers up to the stage so they can hand money to a queen, and elderly women being pulled on stage for lap dances.

“It was not like any type of Pride parade or gathering or meeting. It was a community. It was family showing up for one another in a reunion to celebrate whatever they decided to celebrate,” Dukes said. “The Possum Show isn’t just a show. The community comes together and they love one another, so they support one another.”

Westbrook promises a big surprise at the end of the 2017 show, but like Dukes, Howell was saddened to hear this was the final year for the East Point revelry.

“It brings straight and gay, black and white, the whole rampart of people in the city together for one night,” Howell said. “It just gives everybody a chance to laugh at themselves, to laugh at each other, and to do good. The fact that it’s an LGBT charity is immaterial. It’s the fact that we all come together to just enjoy our similarities and not dwell on our differences.”