Lesbian bar My Sister’s Room will transform into a new venue soon after the new year as owner Susan Musselwhite sells her bar of 15 years to business and life partners Jami Siden and Jennifer Maguire.

Maguire, known to many in the nightlife scene as promoter and emcee Chase Daniels, and Siden, who has been working as MSR’s marketing person, along with Musselwhite and her wife, Patryce Yeiser, made the announcement at the East Atlanta bar on Saturday.

“We decided we wanted to do something like the bar scene in ‘A League of Their Own’ — a place to honor strong women in history and sports,” said Maguire. The 1992 film “A League of Their Own” starred Madonna, Rosie O’Donnell and Tom Hanks and was a fictionalized account of the first women’s professional baseball league.

“We have influential teams here, and lots of local [women’s] teams, that we want to support and want to do things for them,” Maguire said. “We’re kind of going for a Woofs for women.”

The new owners are already hyping their venue, My Sister’s Room Sport’s bar and Grill. The bar will retain its nightclub atmosphere late at night and during the weekends including live entertainment as well as drag performers and DJs — and, of course, dancing.

Siden and Maguire, who met at MSR, say while they have worked at other bars promoting events, their true love has been and remains MSR.

“My home base is still MSR. I’m ready to be there. That’s where our heart is,” Maguire said. “There are a lot of great local businesses in East Atlanta, too.” 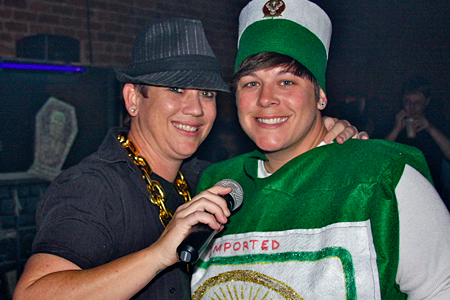 Musselwhite said now is the time to “pass the torch” to people ready to take the bar to the next level.

“We [she and Yeiser] had gone back and forth on what was going to be our next step, where we going to take it how were we going to get there. We had been working with them as promoters for the last couple of years … and I had always felt that I was going to pass the torch to someone in the community,” she said.

“I really wanted someone to have it that has as much passion for it as I do,” Musselwhite said. “And I don’t there are any two people that have more passion then they do. I think this is a perfect hand off.”

My Sister’s Room is having a “Pass the Torch” party  on Saturday, Dec. 17, to celebrate  the news.

Renovations underway, but bar will still have feel of classic MSR

Maguire and Siden are busy coming up with a menu for the bar they describe as an upscale sliders bar that will include vegetarian options. There will also be a limited late-night menu.

The new MSR will have no smoking until 6 p.m. There will be two pool tables and numerous TVs for people to watch all kinds of sports. There will also be a VIP room, Maguire said. The bar will be open Wednesday through Sunday with the nightlife parties and entertainment planned for the weekends.

“We are catering to everyone,” Maguire said. “There will still be the feel of My Sister’s Room. We already have the first three months booked [for entertainment]. We’re very excited.”

The space will be renovated to include another bar (for a total of three) and relocating the DJ booth to make the dance floor bigger. Siden and Maguire are also upgrading the bar’s sound and lighting systems.

The bar changes hands officially on Dec. 31 and the bar will close for six days after New Year’s Eve to complete renovations. MSR will reopen Jan. 7 with the sports bar making its debut on Jan. 14, Maguire said.

Maguire and Siden are huge football fans and look forward to providing a bar environment for other lesbians who love to watch sports. Their loyalty to sports teams, however, is very different — Maguire is a die-hard Florida Gators and Tampa Bay Buccaneers fan while Siden is a Georgia Bulldog and Atlanta Falcons fan.

“We’ll definitely be a home to Bulldogs and Falcons fans,” Maguire said with a laugh.

Musselwhite acknowledges she is not much of a football fan and is looking forward to spring, when baseball begins play.

“I can’t wait to visit the bar and watch the Braves play,” she said.

Musselwhite said she will definitely miss the bar and operating it with her wife, Yeiser.

Yeiser and Musselwhite are looking forward to what they will do next, although they acknowledge they are not sure what that exactly entails.

“It’s the heart and soul of Susie,” Yeiser said. “It’s good to know we are keeping it in the family … and with somebody who wants to be there and do more things with it,” she said. “Now it’s time for us do something new and exciting and fun.”

Both couples are also moms. Siden and Maguire have two children while Musselwhite and Yeiser have four. Musselwhite said having three children age 10 keeps the couple busy and owning and operating a bar at times was tough.

But Musselwhite said she’s not ready to get out of the business of owning her own business.

“I have always loved the entrepreneurial spirit,” she said. “Whatever we decide will be more conducive to our lives.

“I just hoped I made a mark on our community. I’m very grateful for all the support I’ve received over the past 15 years and I want to say thank you to the community,” Musselwhite added.