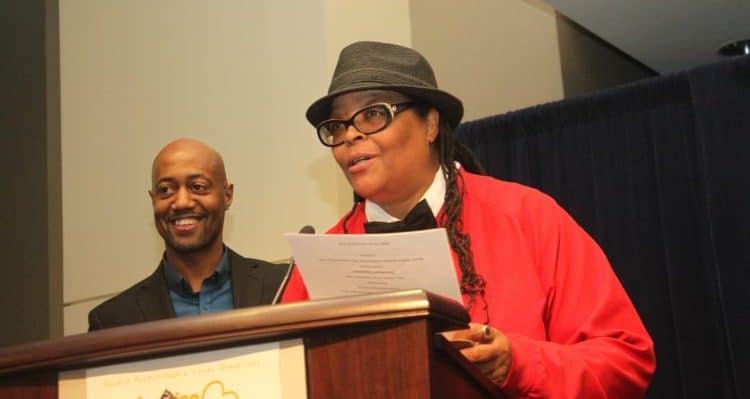 BFFs. Peas in a pod. However you characterize it, it’s clear that well-known gay Atlanta activists Darlene Hudson and Craig Washington have a strong bond. It was evident on a recent Sunday in their wide-armed hugs, in the way they finished each other’s sentences and in their playful teasing about one another’s gray – or absent – hair.

Perhaps nowhere is it more evident and impactful than in the way they came together to organize the annual Rustin/Lorde Breakfast, now marking its 15th year. Originally founded to create a safe, social space for LGBT people to gather prior to joining the annual Martin Luther King Jr. March, the breakfast has grown into a premiere event gathering some 450 activists and supporters this year alone.

The event’s lasting legacy is a testament to the power of long-term friendships in the LGBT community, especially male/female ones which Hudson and Washington agree destroy stereotypes and create invaluable collective understanding.

Make no mistake: Keeping up the two-decade friendship takes work, especially when you’re talking about two prominent movers and shakers. By day, Hudson works to help young adults transition out of foster care and into adult living. Washington, meanwhile, splits time between serving as a prevention program manager at AID Atlanta and working on a project documenting the history of black LGBT club life.

Yet the pair still manages to connect via phone or sit down to a meal to catch up, check on one another and plot their next big effort. Their latest collaboration is something they’re calling the Southern Unity Movement. Described as a nexus of all their work thus far, the movement launching this year focuses on empowering youth to engage in social change and on creating relationships between would-be activists in the community.

It’s those types of connections, both agree, that often blossom into the most high-impact work in the LGBT community.

How and when did you all meet?

Hudson: It was 1994, at the National Minority AIDS Council conference. We were just kind of like hi and bye. I was still living in Arkansas [where she is originally from].

Washington: The conference allowed for someone like her and I to meet because I had never been to Arkansas. We didn’t have consistent interaction, but when she got to Atlanta, I was a co-director at Southerners On New Ground. We kept track of the local movers and shakers and her name always came up. I knew enough to know for sure I liked her and I wanted her on my board.

A few years later, you reached out to Darlene to help you reinvigorate the Gay and Lesbian Atlanta Center, laying the groundwork for the Rustin/Lorde breakfast. It sounds like you all had a friendship of sorts even before you worked together.

Washington: Yes, by the time Darlene joined the board, there was a relationship and trust that had already actually developed just from running in the same circles. We were oriented to talk beyond the formal boundaries. We ended up just sharing ideas to create the breakfast. We had an ease that gave us momentum because trust was there.

That type of trust isn’t always present between gay men and gay women. Why do you think there’s a bit of a wall there?

Washington: Gay men aren’t necessarily any less sexist than straight men. We are still socialized as males and that is to think that we are superior to women and to also distrust or reject that femme energy within us. That sets in our heads a certain kind of lack of respect for girls period. Meanwhile, some women aren’t feeling gay men, possibly because there’s a certain male privilege even in the gay community. Add to that siloing, which just makes people become even more limited and further erodes relationships.

Hudson: It’s relevant for gay men to get together and do their thing and lesbians to get together and do their thing, and trans and bi people to do the same. But it’s important for community to come together. People tend to silo themselves regardless of gender or sexuality. It’s so easy to pull into your neighborhood and pull up that garage door and not see or talk to anyone. I’m looking forward to, in Atlanta, seeing more co-gender events. It takes all sorts. Sometimes it is really boy-heavy!

What are you two personally doing to pull everyone out of their subgroups and into more cross-functional partnerships?

Washington: Back in the day, there was a broader unity. You had just the one or two gay organizations. There was Second Sunday [a men’s group] and ZAMI [NOBLA, a women’s group] for instance – and they interacted with each other. Southern Unity Movement is going to do some of that same community building work by creating spaces where people can communicate.

Hudson: I see it more as another vehicle in the South that’s going to be an educational or training ground through all of our partnerships.

Partnership and friendship seems to be the recurrent theme that’s enabled you all to have successful collaborations for so many years. How do two busy people make an adult friendship work?

Hudson: I know that he’s busy and he knows that I’m busy. We may not see each other every week, but when we do get together, we maximize those moments. He’ll ask “Are you taking care of yourself Ms. Hudson?” Then he’ll say it’s time for a meeting! We’re not really needing to talk all the time but when we do need to, it gets done.

Washington: As adults it’s hard, but we owe it to ourselves to make more room to connect with the people we care about. Whatever happens with the [Rustin/Lorde] Breakfast, I will always love Darlene and I don’t want to wait until it’s too late to show it.

What benefits do you think your type of friendship has beyond just enriching the individuals?

Hudson: There’s a little saying – the more we get together, the happier we’ll be. There’s benefit to bringing like-minded people together, whether it’s over popcorn or stacks of ribs. We begin to talk and exchange ideas. I’ve seen it happen in my backyard and I’ve said, I’m going to keep cooking those ribs – because I see what happens. People form cohesion.