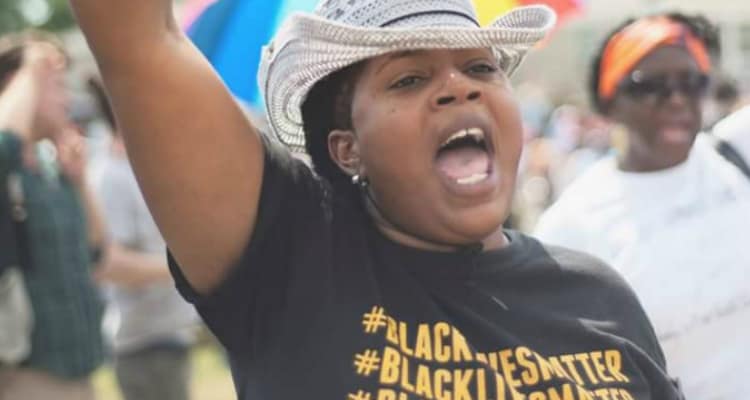 Catching Up with Southerners On New Ground co-director Mary Hooks

When it comes to iconic Atlanta-based social justice leaders, names like Dr. Martin Luther King Jr. instantly come to mind. Somewhat lesser known, however, are their modern counterparts, who continue to carry the torch of social justice for a wide and growing cross-section of marginalized communities. Among those progeny one name rings out loud and often: Mary Hooks.

Hooks, co-director of Southerners on New Ground, is easily recognized as one of the city’s most passionate and prolific social justice agitators, found shouting through a bullhorn or hoisting a sign on behalf of black Americans, the poor, the LGBT community and more. In fact, in less than a decade of activism, Hooks has built an impressive résumé that includes proactive roles in stunting police violence in communities of color and improving the treatment of female prisoners.

It’s a surprising twist for Hooks, a former human resources professional who hadn’t much considered leaving her traditional job until a chance 2009 meeting with an activist in, of all places, a bar.

These days Hooks is a full-time activist who has spent a little over a year in her latest role with SONG, a grassroots organization that works at the intersections of race, class, sexuality and gender. She’s also an organizer of the Atlanta chapter of Black Lives Matter. When she’s not raising hell with either organization, Hooks is most likely to be found on the porch of her home in the Sylvan Hills neighborhood of Atlanta, enjoying a brandy and daydreaming about a world in which her 4-year-old daughter, Porter, can enjoy the fruits of her activist labor.

You’re involved in all things activist. What do you boil your life mission down to?

MH: My life mission is to fulfill our ancestors’ wildest dreams, of getting our people free, of allowing our people to participate in the movement. To get oppressed people liberated. That involves building local power and community – organizing individuals to engage in their local community. Creating a world without cages and jails, where people have safety and dignity. Also fighting those that are in power to get the power back into the hands of the people and to shift the culture we live in – the culture of violence and the culture of isolation. Organizing is a vehicle for that.

You’ve been active in social justice since 2009. What have been some of the changes in the way you approach this work since then?

MH: I came into organizing not knowing what organizing was, so a lot of what I was trying to do at that time inside of SONG was to develop a kinship network, to break isolation of LGBT people living in the South. Now we’re at a point that we can give people the tools and training to organize in their community around issues that are impacting our communities not just as LGBTQ people, but as black folks, as working class people. We have to wake up people’s political imagination about how we take on fights. So beyond the marches, which is still one of the big catch-all, rapid response things, we’re using the guerrilla theater in terms of our approach to the work.

What does SONG feel are some of the emerging issues facing the LGBT community and marginalized people overall?

MH: We see critical issues with people who live at the intersection of race, class, sexuality and gender. One issue is the criminalization and detaining of transgender folks. They are put in cages and made to sit in solitary confinement because they don’t conform to the binaries of male population or female population. Also homelessness. People come to Atlanta from small towns looking for sanctuary and gay community and find themselves sleeping downtown and not finding community or resources, and not having access to healthcare. I just see this new administration stripping away Obamacare and the Affordable Care Act and worry our folks are going to be impacted.

What do you think a Trump presidency will look like for LGBT people and people of color? How will SONG respond?

MH: I think that this new administration will continue to use wedge issues, pitting communities against each other. I think all the stuff we saw with the anti-trans bills that were coming out last year was an example of how this administration will function, passing laws like bathroom bills that demonize a set of our base and our people. We’ll continue to see more of those policies come into play. I believe it’s either Minnesota or Texas that’s in the state House right now trying to put forth legislation that says if stores are going to have gender neutral bathrooms, they have to hire bathroom monitors to check birth certificates. We’re going to see increased policing of people’s bodies. I think for SONG, the focus will become to build up the heart muscle of our people to fight back, to show active resistance to protect our people to stand up for each other.

What is your response to those who feel that the results of social agitation are just too slow to make getting involved worthwhile?

MH: It took black people 400 years to get slavery abolished. So when we talk about this legacy of resistance, it’s a part of a long term goal. We want to see changes happen instantly in our community of course, but it is more about how we are setting the world up for our children and our children’s children. We have to see ourselves as part of something larger – part of a legacy of resistance. Every day we have an opportunity to make history. We have to be accountable for that and should want to feel like a contributor.