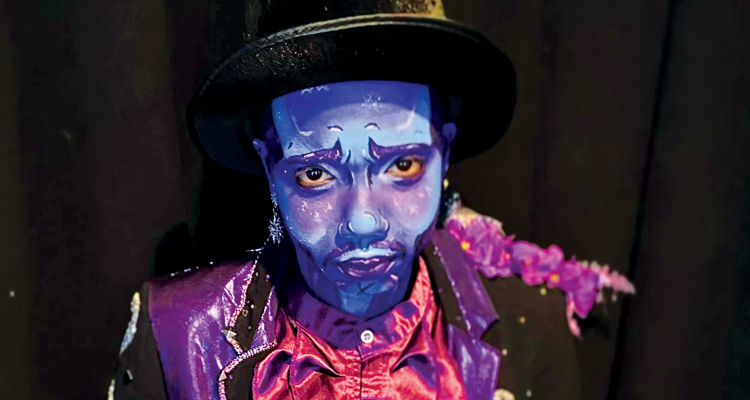 Catching Up with King Perka $exxx

King Perka $exxx is equal parts insanely talented and hilariously honest. I recently had the pleasure of sitting down with the drag king to discuss his first-ever competition win on “Drag Me, King,” the lack of representation drag kings receive, and how his drag persona influenced his gender identity as a transgender man.

How did you get into drag and why did you decide specifically to be a drag king?

It first started at [Atlanta] Pride 2017. I saw [drag king Mystery Meat] at Piedmont Park and he said, “Oh, I’m going to a drag show.”
I had seen drag from “RuPaul’s Drag Race” and at first I was like, “That’s cool, it’s pretty, but it doesn’t seem like my gig.” I went to that drag show in Piedmont Park, and it was amazing. I saw a bearded queen, I saw a Black queen who was doing one of the Sailor Scouts [from “Sailor Moon”], and an AFAB drag queen. It opened my mind to what drag could be, and I thought that was something I’d want to do. Then I saw this all-Black drag show [Neonblk] and thought, “This really is for me!”

I know you don’t need permission to do drag, but it was like I got permission.

From there, I kept on trying and kept on going, and I failed a lot — like, a lot. People like LJ Van Pelt, Dotte Com, and Ella Saurus Rex encouraged me and gave me a space to fuck up and grow. Seeing people like Dax ExclamationPoint, The Vixen, and Landon Cider achieve was inspiring and validating, and that’s what I want to be. I want someone to think, “If he can do it, I can do it.”

How would you describe your own personal drag — what is King Perka $exxx to you?

King Perka $exxx is ‘?!’ I consider myself a wild card king. There’s so much out there, and I don’t want to put myself in one box or brand of drag. I’ve been labeled an alternative king, and I guess I am, but the first drag I saw was alternative, so I went to other [less alternative] places I was like, “Why don’t your drag queens have beards? Why aren’t you doing an enema with vodka on stage?”

Sometimes I do cosplay, sometimes I don’t have therapy and I need to let some feelings out. Other times I’m just driving in my car, hear a song, and think, “You know what would be an awful idea? This,” and I put it on stage for everyone to see.

Being a transgender man, what is the relationship between drag and your gender, if any? Do you see drag as an affirmation of your gender?

Drag helped hatch the egg. In college, my friends told me that cis people didn’t question if they were cis, and I was like, “They don’t? Oh no!” So, I identified as non-binary, they/them. But then people kept calling me “he,” even outside of drag, and I was like, “Why do I like this so much? Oh shit.” I started drag about eight months before starting testosterone. The fact that I’m trans doesn’t change my drag at all, but I do feel more pressure to make a visible difference between my day-to-day life and my drag persona, because I don’t want anyone to say I’m not trying as hard because I’m trans. Being trans doesn’t make drag any easier or harder — it may make my pronouns easier, but people still mess that up.

If anything, [being trans] makes me want to be out there more. There’s not that much Black trans representation or even POC trans representation. Trans women deserve the world and the universe, but when I see trans visibility posts [online] it’s [usually] only trans girls. If they do have a trans guy, he’s white or white passing. I just want to be out there so people can see someone like them and not feel like an anomaly.

To touch on this idea of representation and visibility, at least in the popular media, there’s a lot more visibility of drag queens, like with “RuPaul’s Drag Race,” than drag kings. Why do you think that is?

Misogyny. Traditionally, when people hear drag king they think about a woman dressing as a man, and for some reason being gay means you have to hate any and all women. I hear and see a lot of internalized and externalized misogyny [in the community].

One clock I hear a lot is that drag kings don’t try as hard as queens, but there are both good and bad kings and queens. That discouragement doesn’t make people want to try harder. There’s a way to give constructive criticism. Give the direction, but don’t shit on someone’s existence.

In the local scene, [drag kings] don’t always get the encouragement and sense of direction that I was lucky to get.

There’s also this tokenization of having one or two kings [at an event] and thinking they’re good.

Tell me about your experience competing on and winning ‘Drag Me King’ last year, especially during the pandemic when in-person drag was non-existent.

“Drag Me King” is a YouTube drag king competition started by Arrows on the Whatta Weekend YouTube page. They paid me to compete in this, and that’s one thing I will applaud — pay people for competing in competitions! It’s also run and funded by a Black trans person, so that’s something that’s remarkable.

The people who competed were me, Beelze Babe from Indiana, Kingdom from St. Louis, Tenderoni from Chicago, Buster Highman from Toronto, and Blaq Dinamyte from Washington, D.C. There were three categories: past, future, and daddy. I took a different take than everyone else. For past, I did a number to show my roots — my parents are immigrants from Haiti. For future, I did a last-minute cyborg look. For my daddy look, I am completely proud of it. I did a video about how much I love my cat – cat daddy! Everyone was so sexy, and then there was me: cats! I think that was the category that sealed the deal on me winning.

I was shook when I won Best Makeup — it was against Tenderoni, his face is one of the blueprints. That was when I was first starting to do colorful faces, so that was very affirming.

That’s the first and only competition I’ve won — I’m proof you don’t have to win to be a winner. Am I happy and proud that I won? Yes. Does that define my drag career? It doesn’t. TAYLOR ALXNDR hasn’t won a competition, and look at her, a whole empire. I’m happy I won, but I don’t let that make or break my drag life.

So, you’re going to be back in Atlanta later this month, on July 30, for the Southern Fried Queer Pride SWEET TEA Variety Show. What can people expect from you at this event?

I’m planning on doing something Black and entertaining. It’s going to be fun, it’s a variety show so it’s not just drag, and I love me a variety show. I’m going to be doing a Lil Nas X number. I’m also going to do a satirical, comedy Haitian number.

What are you doing moving forward, and how can people support you?

Follow other drag kings, follow other Black performers. The next time you see an all-white line-up, ask where the people of color are.

Support me by supporting yourself. Take care of yourself; get your mental, physical, and relationship health aligned; line up your life, and line up your hairline.

Subscribe to King Perka $exxx’s Patreon for as little as $3 a month at Patreon.com/KingPerk. You can buy his merch at Perk-Merch.Creator-Spring.com/listing/you-re-perk-fect and follow him on social media @kingperkasex. To see King Perka $exxx in the SFQP SWEET TEA Variety Show, get tickets at sfqp.info/sweettea21.