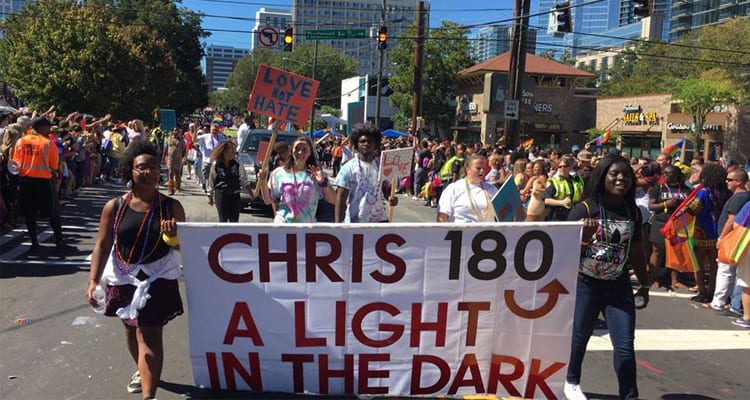 In a community where suicide rates are on the rise, LGBTQ homeless youth are reaching out for help now more than ever. In Atlanta, there’s a non-profit working to get kids off the streets and on a pathway to life success.

“We work with a lot of gay youth in the foster system,” said Kathy Colbenson, CEO of CHRIS 180. “These kids didn’t have family support systems, didn’t find acceptance and so they would be homeless when they aged out of foster care.”

Colbenson, a therapist, and other therapists joined together, applied for a federal grant and opened the Rainbow Home in 2000. Nearly a decade after that following a bout with defunding, CHRIS 180 re-named and re-opened what is now called the Summit Trail Apartments. “We tripled our capacity, a total of 44 young adults,” said Colbenson. “We have apartments for parenting youth, and 24 single apartments.”

One of those young adults, Brian Boster, felt the need to change his life after living as a homeless teenager. “I didn’t feel like I fit in with anybody,” said Boster. “I grew up in Jonesboro, Georgia and probably the first person to come out in high school.”

His parents were accepting of his newfound lifestyle, but after leaving home, Boster wound up in the wrong crowds where drugs became a focal point in his life. He later went to jail, but soon found the Rainbow Home in the early 2000s. “It was a great place, I still remember all of the counselors,” he said. “The staff was really supporting, always easy to talk to.”

At the age of 37, Boster is a voice for the success of CHRIS 180’s programs. “Just having a safe place to go to. They would kick us out for a couple of days, and then it seemed like we could always come back. The director there was really supportive and would always let us come back,” said Boster. “It was a great foundation and stepping stone to be me.”

Colbenson remembers Boster from his stay at Rainbow House and the ups and downs. “We’d have the hard talk, say you need to leave, think about it and try again,” said Colbenson. Almost a decade and a half later, the two still keep in touch, and now share his story as a way to connect with the younger generation that now calls CHRIS 180’s programs home.

“These kids didn’t really have anybody else and so much of other struggles connects to being able to accept yourself for who you are,” said Colbenson. “Everybody has their own journey and own struggles but the key thing is having people who support you and give you other chances. It’s such important work.”

Her work continues as CHRIS 180 expands even further into the arms of Atlanta’s LGBTQ community. The non-profit’s capital campaign helped raise a total of $15 million for a much-needed expansion of space and services.

“Since 1989, we’ve been doing training for other people in the industry to help them learn how to work with LGBTQ youth in a nonjudgmental, supportive way,” said Colbenson. “A lot of square footage in this new building is focused on training.”

The old building is now the site for the counseling center, and because there’s more space, it means more staff to help with not only LGBTQ youth but their families as well. In addition to counseling and training, the integrated health clinic which the campaign help fund. “We’re going to target the 16 to 26-year-old that’s homeless and uninsured so that there can be healthcare provided,” she said. “That will hopefully open in November.”

For more information on CHRIS 180’s services for LGBTQ youth, visit their website at Chris180.org.