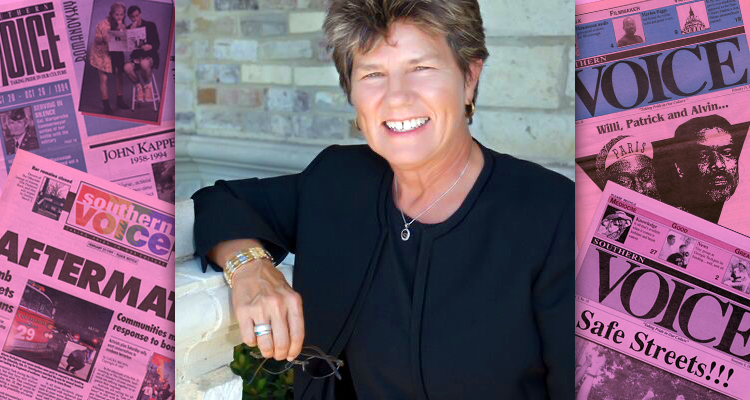 Chris Cash, the founder and Publisher Emerita of Georgia Voice, was inducted into the LGBTQ Journalists Hall of Fame earlier last month.

Cash was chosen for the honor largely for her work with Southern Voice as the original founder, publisher, and executive editor from 1988 to 1997. Along with being the predecessor to Georgia Voice, which was founded by Cash, Laura Douglas-Brown, and Tim Boyd in 2010, SoVo would come to be known as an integral part of Atlanta’s — and the Southeast’s — LGBTQ history.

We sat down with Cash to discuss the history and legacy of SoVo, her own career, and the “unbelievable” honor of being cemented into history as an outstanding LGBTQ journalist.

You were given this honor mostly for your work with Southern Voice. Did you ever think, when you were founding the paper, that it would leave the legacy that it has?

It never crossed my mind because I was completely caught up with the daily challenges of meeting deadlines and meeting payroll — that was a big, big issue in the beginning. Something always, without fail, would happen at the last minute; we would sign on a new advertiser or an advertiser would decide to pay six months in advance, just out of the blue, and we’d be okay.

I didn’t think that those were coincidences. It felt like, to me, that the universe and the community wanted us to survive and succeed. Otherwise, where would this stuff come from?

I did realize very quickly what a lifeline the newspaper was to our readers, particularly in Atlanta … there was no other real [LGBTQ] newspaper in the entire South. Support came really swift and strong. There were so many people that believed in us and wanted us to succeed. We used a lot of volunteers in the very beginning when we couldn’t afford to pay people. None of this would’ve happened without those people and the LGBTQ business community who were the first to jump on board and help us. Did I know that it would have the impact it had? Absolutely not.

When founding SoVo, what was your goal? What need were you trying to fill in Atlanta and Georgia?

In Atlanta, at that time — I got the idea in April of ’87, we launched in March of ’88 — there was Etcetera Magazine, and they did have some news pages, but it wasn’t extensive enough for either local or national news for my liking.

I was on the steering committee for the ’87 March on Washington for Atlanta. When I was the editor of the newsletter for the Atlanta Committee for the March on Washington, I came across all these bona fide LGBTQ newspapers across the country: the Washington Blade, Philadelphia Gay News, Bay Area Reporter. I thought, ‘Why don’t we have a paper like that? We need to have a paper like that.’ Atlanta is the home, the seat of the Civil Rights movement — not to compare, not to say they’re exactly the same, but what we were struggling for was equal rights. It really didn’t make sense to me.

In April of 1987, I literally woke up one morning and sat up in bed, and I said out loud, ‘I am going to start an LGBTQ newspaper for Atlanta.’ For almost a decade before then, I had toyed with the idea of starting some kind of publication. I thought of starting a women’s magazine, a women’s sports newspaper. All of these different trains of thought and ideas all came together on that April morning; by then I was involved with the March on Washington committee and doing the newsletter. I’ve always been drawn to print media, ever since I was a teenager.

What was the political landscape like at that time?

Reagan was still president, and he had still yet to mention the words AIDS or HIV. You need to understand that we were a community in crisis at the time. Everybody knew someone who was dead or was dying from AIDS. That was very personal for a lot of us, and for a lot of the community it was the primary focus — and for good reason. The ’87 March on Washington created this tsunami of activism across the country; Atlanta was no exception. The Bowers v. Hardwick decision in ’86 that upheld Georgia sodomy law was another galvanizing event … Our first five years were so full of activists and news that we could barely keep up. It was a thrilling time. I feel guilty sometimes to say I miss those times, but I do miss those times because we were a pretty frickin’ united community at that time.

What about your career prior to SoVo? Were you involved with LGBTQ media beforehand?

My only involvement with LGBTQ media prior to SoVo was that newsletter, and I learned a lot doing that. I learned a lot of practical things about putting a publication together, and I had a pretty good idea of what it took.

Most of my career prior to launching SoVo was social work. I worked for the State of Georgia in Fulton County as an eligibility worker for AFDC (Aid to Families with Dependent Children). I also worked in foster care and adoptions.

To shift to the present, how does it feel to now be considered a Hall of Famer among LGBTQ journalists?

[It feels] pretty unbelievable. I’m thrilled to be in the company of some truly outstanding journalists and writers … This recognition of my work has brought me a sense of peace that I didn’t even know that I needed. What it says is, ‘What you did mattered, it really mattered.’