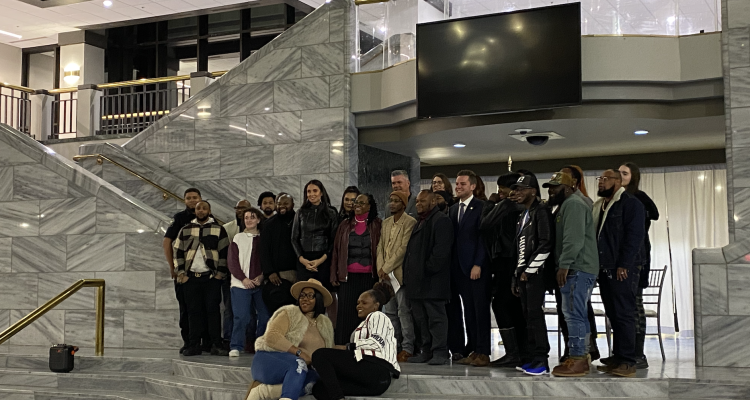 Members of Atlanta's transgender and allied community gathered at Atlanta City Hall on November 17 to honor those we have lost to anti-trans violence.

In honor of Transgender Day of Remembrance (November 20), Destination Tomorrow, Atlanta’s new Black trans-led LGBTQ center, hosted a silent vigil at Atlanta City Hall on Thursday, November 17 in partnership with the I Am Human Foundation and the Mayor’s LGBTQ Advisory Board.

The event — while a somber reminder of the disproportionate violence transgender people, particularly Black and Brown trans women, face — was also a celebration of the vibrance, beauty, and fortitude of the trans community.

Malik Brown, the Director of the Mayor’s Division of LGBTQ Affairs, opened the event with a welcome from the City of Atlanta.

“Tonight, we are here to honor and remember those we have lost to fatal anti-trans violence in observance of Transgender Day of Remembrance,” he said. “The people we have lost are more than numbers. For many people in this room, these were peers, these were friends, and these were loved ones. While I am somewhat comforted that this year’s numbers have shown a small decrease in the lives we have lost, I know that no one in this room will rest until that number is zero.”

Brown noted the strides Mayor Andre Dickens has made in support of Atlanta’s transgender community: entering a partnership with the Atlanta Legal Aid Society to allow transgender residents to legally change their name free of charge (a program of which over 100 residents have already taken advantage), signing the Human Rights Campaign’s pledge to end violence against Black and Brown trans women, signing an administrative order giving City of Atlanta employees the ability to add their pronouns to their staff badges, and appointing Chloe Jordan as the City of Atlanta’s new Transgender Affairs Executive Fellow. With the appointment, Atlanta became the only known American city to have both a director-level position on LGBTQ Affairs as well as a staff member solely dedicated to the advancement of the transgender community.

The vigil was attended by several members of the LGBTQ community, with Positive Impact, the Atlanta Pride Committee, Game Changing Men, and Thrive SS among the organizations represented. Three of Georgia’s elected officials were also in attendance: Kim Schofield, who represents the 60th district in the Georgia House of Representatives; Gregg Kennard, who represents the 102nd district in the Georgia House; and Matt Westmoreland, who holds the Post 2 At-Large seat on the Atlanta City Council.

Along with honoring those we’ve lost to anti-transgender violence, community leaders celebrated the transgender community: both those who are here and those who have passed.

“I feel like trans people have a certain level of iridescence that they add to culture,” Melania Armenta, a member of the Mayor’s LGBTQ Advisory Board, said. “That’s something that we must also remember during these moments of remembrance, that most of us have lived these openly beautiful lives and are always shepherds of community inviting people in our doors to celebrate life, to celebrate color and art in nuanced ways that eventually feed into our neighborhoods and our cities. Remember the beauty behind the trans journey.”

“I’m a firm believer that we are spirits living a human experience. Energy doesn’t die, it transfers,” Toi Washington-Reynolds, the executive director of the Trans women of Color Healing Project, said. “I’m not standing here on my own shoulders; I’m standing here on the shoulders of our fallen siblings who are now our ‘transcestors.’ We’re fighting for them. I believe that our energy is multiplied because we now have those that we have to represent, we have a mission that we have to carry… Let’s celebrate each other, let’s love on one another. Spirit has no gender, and love is our only reason for being here. Love is an airborne pathogen; all it needs is a host. Let’s love one another and create those environments that are conducive to healing.”

Sybastian Smith, the national organizing director of the National Center for Transgender Equality, similarly evoked the countless “transcestors” who have been victimized by transphobia and violence, calling all in attendance to continue to fight for them and “the most marginalized of us all.”

“I stand for my Black and trans ancestors, because it is upon their shoulders that I have stood for many years to do this work,” he said. “I stand for the faces that look like mine, that share the same experiences that I do, that have endured the same hurt, pain, joy, and victory that I have. I stand for the black trans women who are fighting for their very lives at this very moment. I stand for the young person who is struggling trying to navigate through their gender identity in an already unsafe and unhealthy environment. I stand here for the Black and Brown trans woman that is right now staring down the barrel of a gun at the risk of being on the receiving end of daily violence. I stand here for the Black and Brown trans man who is about to end it all because he feels his life is no longer worth living.”

“The most marginalized of us all is where I put my strength in, and I vow to continue to fill in the gaps for those who don’t have the strength themselves,” he continued. “I also stand here today knowing that trans people, especially our youth – our babies – are under attack in every area of life… In the 2023 legislative session, you will see more Don’t Say Gay bills, more Don’t Say Trans bills. You will see a threat to marriage equality, you will see gender affirming care bans for trans folks… and even an attack on our creative expression through drag. Y’all better wake up… I will continuously quote one of our great leaders of the movement, Dr. [Martin Luther King] Jr.: ‘Until all of us are free, none of us will be free.’ Until the smallest, most marginalized of us have our rights, trust and believe you won’t either.”