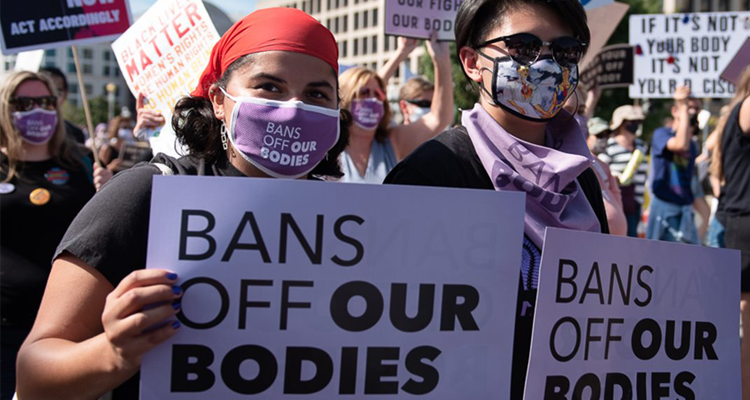 Protestors at the Bans Off Our Bodies march on October 2, 2001 / Photo via Facebook

Concerns Over Abortion Access in Georgia: ‘This is the Most Critical Moment’

Even before serious concerns arose around the possibility of Roe v. Wade being overturned, access to abortion in Georgia was extremely limited. Now, following the recent shift in the Supreme Court to a 6–3 conservative majority, pro-choice activists worry that should Roe v. Wade be overturned, residents of Georgia may lose access to abortion and other reproductive services altogether.

“We’re obviously not new to attacks on reproductive rights and access,” said Lauren Frazier, Communications and Marketing Director for Planned Parenthood Southeast, “but this is the first time that we have had a Supreme Court that is packed full of Trump-appointed conservative judges.”

According to data from NARAL Pro-Choice America and the Guttmacher Institute, access to abortion in Georgia has been increasingly restricted since the early 2010s. According to Guttmacher’s most recent data, from 2018, there were 26 total facilities in Georgia that provided abortions, 15 of which were clinics, illustrating a 12 percent decline from 2014. Georgia also already has an extensive list of restrictive legislation regarding abortion, including notifying the parents or guardians of patients who are minors, a state-mandated counseling session followed by a 24-hour waiting period, and a ban on the procedure being performed after 20 weeks of pregnancy. Additionally, a six-week ban passed in the Georgia Senate in 2019 could take effect should Roe v. Wade be overturned.

The restrictions will start with abortion, but that may not be where they end, according to Frazier. “If they’re coming for our abortion rights, they’re going to also come for our birth control access,” Frazier told Georgia Voice. “This is really just a snowball effect of completely rolling back access to the full spectrum of reproductive rights.”

Restrictions on abortion and reproductive rights impact all people who may benefit from them, but have a disproportionate effect on those who are already members of marginalized or vulnerable populations. A study on individuals seeking abortions in Georgia found that more than 50 percent of patients were Black, more than 75 percent were single, and less than 50 percent had received post-high school education. In short, the people who will be most affected by an abortion ban will be those who already face racial and economic barriers. Additionally, Black women in Georgia account for the highest rate of maternal mortality incidents.

Frazier reiterated these disproportionate impacts, noting that communities of color, poor, and rural communities face greater barriers to receiving reproductive care services, which are only exacerbated by legislative bans. She stressed the impact that Georgia’s recently proposed bill, SB 456 — which would heavily restrict access to abortion medication by mail — would have on marginalized people.

“That disproportionately impacts folks in rural areas, poor people, [and] young people, who might not have access to transportation as easily as other folks,” Frazier said.

So, how can individuals best support a future in which abortion is a national right? Frazier has a few tips.

“If we aren’t electing reproductive health champions who are going to protect our rights to access, then we’ll find ourselves in a situation like we’re in right now,” she said. “People need to remember that these politicians work for us, and just like they were put in those seats, we can remove them from those seats if they’re not representing our interests.”

For more information on how to support Planned Parenthood’s ongoing efforts, visit their website, plannedparenthoodaction.org.