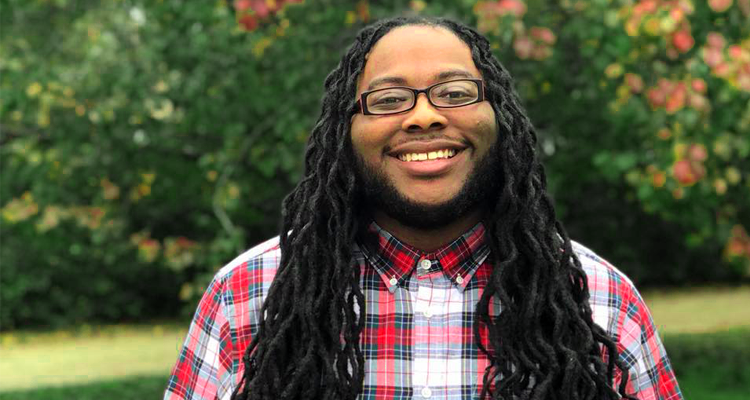 Da’Shaun Harrison: A Writer and Organizer Who is Documenting History

During Black History Month, it’s easy to look back to the past to take inspiration and discover necessary context for the world we’re living in. We don’t have to look to the past, however. There are Black scholars, writers, and organizers creating and documenting history whose work we can reliably turn to in order to understand the realities of today. One such person is Da’Shaun Harrison.

Harrison is a multihyphenate organizer-writer-editor who is using their own experiences as a Black fat trans nonbinary and disabled person to create work that’s eradicating racial and gender identity disparities in journalism and academia while creating practical language others like them can use to understand their own experiences.

Harrison first became an organizer back in 2014 while they were a student at Morehouse College after the murder of Mike Brown in Ferguson, Missouri by police officer Darren Wilson.

“There was a huge protest here in Atlanta after [Brown] was murdered in August, and I had just come to Atlanta at that moment,” they told Georgia Voice. “After the nonindictment in November, there was another really big break out moment, and that’s when I became really involved in organizing.”

Harrison was a first-generation college student from a poor background who had experienced sexual violence, queer and trans antagonism, and eviction and homelessness due to gentrification. These experiences influenced and continue to influence their organizing, but it was the dearth of organizers that really inspired them to get involved.

“So much of my interest in organizing was because of my identity,” Harrison said, “but mostly because I realized there was a significant need for more folks to be active in movement work and there was so little space to make that happen.”

This need for people like Harrison in the world of organizing is also reflected in the world of writing. While they first became a freelance writer for the income because they were experiencing homelessness, Harrison says writing is a way for them to document the truth about organizing efforts in the South — or, as they say, “the stories that would otherwise be left out of the textbook.”

“Widely it’s understood that our history is recorded by the people who win, and by win I mean do the slaughtering,” they said. “Therefore, there are stories that aren’t told, or aren’t told in a particular way, because of who gets to write the history … So often, Black folks have been removed by the ability to write, be published, or be heard. Being able to have access in this way to tell these stories, give this language, to theorize about these experiences in ways we have often been cut off from, for me is just so important. That’s why I think writing and organizing go hand in hand, because you get to document the experiences you’re having on the ground.”

Harrison’s writing experience includes being the associate editor and then managing editor of the now-dissolved WearYourVoice magazine, where they covered topics like local and global politics, fatness, race, climate change, and gender. They are now the editor-at-large of Scalawag, a publication catering specifically to queer Black people and people of color from the South. Harrison is also a published author with their book “Belly of the Beast: The Politics of Anti-Fatness and Anti-Blackness,” which Georgia Voice covered in our latest health issue. “Belly of the Beast” is a work of theory exploring the ways antifatness and anti-Blackness coexist and cooperate to animalize Black fat bodies and threaten the lives of the people in them. Harrison wrote the book in 2020, which directly influenced its contents and makes it a timely analysis of the policing of race and health done by police departments and organizations like the Centers for Disease Control and Prevention. “Belly of the Beast” is specifically written from a Black trans masculine perspective, something Harrison says is lacking in the world of social political theory.

“A lot of fat studies is centered around the white, cis, fat woman experience,” they said. “I wanted something that was clearly about Black folks writ large but more specifically about Black trans masc folks and Black trans non-binary folks. Fat studies, Black studies, and gender and sexuality studies are really brilliant disciplines but oftentimes don’t account for the ways these identities overlap. For me, as somebody who is sitting at these intersections, I needed something that gave language to my experience … There’s a particular way that folks, especially in fat studies because it’s a very white space, are unclear on how to write about Blackness and more particularly the ways that fatness is read on Black bodies. We don’t get to see, at least on a mainstream scale, conversations on the ways that anti-fatness exists because of the creation of Blackness and therefore anti-Blackness. There’s not much room, or not much conversation, on how Blackness masculinizes the ways that fatness is read on people’s bodies because of the way it’s animalized.”

“Belly of the Beast” is a must-read, especially during Black History Month, and references the work of other incredible and intelligent Black authors, like Zakiyyah Iman Jackson’s “Becoming Human: Matter and Meaning in an Anti-Black World,” Saidiya Hartman’s “Scenes of Subjection: Terror, Slavery, and Self-Making in Nineteenth-Century America,” and Kiese Laymon’s “Heavy: An American Memoir.” Other Black writers Harrison has been inspired by and suggests reading include Hortense Spillers, Rinaldo Walcott, Christina Sharpe, Dr. Daniel Black, Toni Morrison, bell hooks, Patricia Collins, and Sabrina Strings.

You can learn more about Da’Shaun Harrison online at dashaunharrison.com. Read Scalawag at scalawagmagazine.org and purchase “Belly of the Beast” at Charis Books and More in person (184 S Candler St) or online (charisbooksandmore.com).