Restaurateurs and brothers Sean and Gilbert Yeremyan, owners of Gilbert’s, said they were excited about their new restaurant’s opening and were also happy to welcome “10” to the neighborhood.

“We want to create a place that will complete your night,” said Sean Yeremyan. “10th & Piedmont was designed to appeal to our neighbors who want to enjoy dinner with a group, late night drinks, or something in between.”

Guests will be able to enter the restaurant and lounge from inside the adjacent restaurant, Gilbert’s Café & Bar, or use the entrance located at the Piedmont intersection. 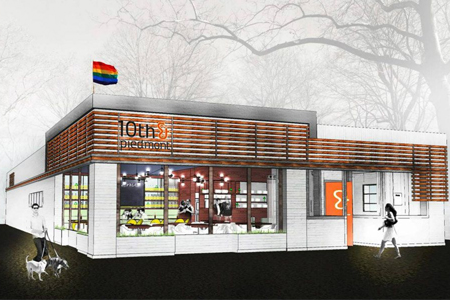 In March, the brothers announced they were expanding Gilbert’s into the old Outwrite space and that they would honor its legacy and the location that has long been an iconic location for LGBT Atlanta.

“The corner of 10th and Piedmont has been a beacon of progressive attitudes, acceptance and respect, we wish to continue that legacy as the city matures and welcomes an ever increasing diversity and a growing respect for general human rights,” the owners said in a Facebook posting.

Outwrite closed Jan. 26, 2011, and filed for bankruptcy after years of financial struggle.