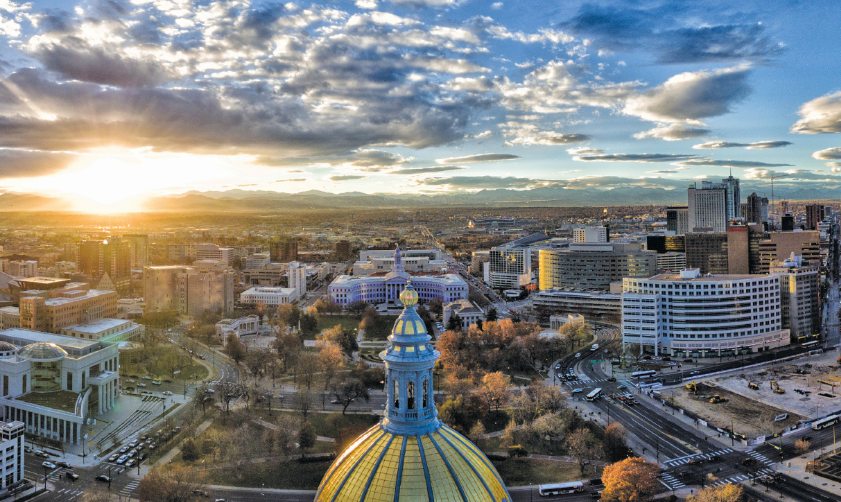 Adventures in the Mile High City

Berlin Sylvestre
Culture
October 25, 2018
In three hours’ flight time, you’re suddenly peaking out at the Rocky Mountains, a chain that’s usually snow-capped and gorgeous, gleaming majestically as they do on so-inspired Coors’ cans. As you touch down, the flat land calling itself the Queen City of the Plains seems to go on forever. The elevation is up so much that the clouds seem to graze your head as you step out into the ultra-bright day and into your rental.
The big, open land is, in its own way, a slice of heaven.
It makes sense that Denver saw a huge population-boom at the turn of the 20th century. Patients suffering from tuberculosis were pointed west by doctors who knew that good sun and rarified air could do some besotted lungs some good. Before health-seekers were gold-miners and men with rawhide gloves in search of land to raise cattle. The settlers of Denver were all on a mission and the spirit of adventure lives on in the small but affable “west of the Midwest” city.
Take A Breath
It’s almost too easy to find yourself suckin’ wind and not gettin’ too much of it. In Denver, you’re up 5,280ft. above sea level, which means some folks find themselves bereft of a full lung’s worth of oxygen, leaving them with the motion sickness, headaches, breathlessness, and sometimes nausea in what’s known as “altitude sickness.” It’s usually temporary (up to 3 days), but something to watch. Getting excited after you’ve dropped your bags off in your room and hopped on the mountain-trail is fine and dandy, but many visitors have perished by not giving the adjustment some time. Ease your way in. Fun fact: Athletes come to Denver to get their cardio on. If you can hit your numbers here in the Mile High, you’ll be able to crush them once you’re back at sea level.
Slip Slidin’ Away
Aspen is probably the most-known ski town in Colorado’s mountains, but it’s rather expensive. Apart from Vail, the next best guess for great slopes within budgetary reason is in the city of Breckenridge. This is an absolutely gorgeous town that literally feels like a snow globe come to life. The Alpine stylings settled in a valley of evergreens dusted with snow give the town an otherworldly feel. Like most Colorado towns that call to athletes, the night-scene isn’t as happening as other tourist destinations. That’s because most of the people here came for the skiing, which is done in light hours. (The ones who would be partying are getting their winks in for a long day of skiing tomorrow!)
The Recreation Station
Once you come down off the mountains, heading back to Denver to feel the culture is where it’s at. Denver may be small, but it packs a little punch. To begin, they’ve legalized marijuana for those 21 and over. With an ID and cash, you can walk up to one of the hundreds upon hundreds of dispensaries and engage with a “budtender” to find out which treat is right for you. They, of course, sell cannabis in its natural state (the flowers for smoking/cooking), but they also sell it in many wacky, wonderful ways. From fizzy drinks to chewing gum, Denver’s like Willy Wonka and the Cannabis Factory. There are more dispensaries in Denver than there are Starbucks.
Denver is also a huge “bro” town — in the good way. If you consider their beloved Broncos had a huge run a few years back, you can imagine that the sporty town is still pretty high. Beards and beer abound, and Denverites love a good craft brew. You can’t throw a rock without running into another warehouse that’s been gutted and repurposed as a brewhouse. With giant silos looming above, breweries welcome you to a flight of their best wares as a taco truck (etc.) sits outside to serve up something spicy in between sips.
LGBTQ Nightlife
Denver is funny in that it doesn’t have a place of high LGBTQ nightlife concentration. Whereas one might say the area around Piedmont Park is where we congregate, Denver’s scene is split up and bandied about the districts. That’s not necessarily a bad thing, as it creates better parking situations for the crowds wanting to go to niche clubs and bars. It’s in those mostly LGBTQ-isolated zones that you get a bar for women, for bears, for leather-daddies, for club kids, for sports freaks, you name it. As Denver is a really progressive city, hate crimes aren’t big. Feel comfortable being you wherever you go, so long as you mind your manners and don’t bring up the Seattle Seahawks.