UPDATE: And that’s a wrap until next year — East Point Possums make us yearn for more

A favorite part of my experiences at EPP has been cheap drink tickets and the football-team sized jugs of East Point Punch. Think delicious, red Southern Comfort Kool-Aid. It tastes like party time and my crew and I usually can’t get enough.

Apparently we’re not the only ones!

The infamous punch and the sangria (which we’ve never favored over the punch) were gone by about 9 p.m. — two hours before the show was over. That left us with 30 kegs of PBR. (See update below about the “liquor crisis.”)

Some of our drink tickets (and our awesome front row seats) came from our friends at Common Ground Real Estate, and we bought some of our own. Everyone left with a pocket of tickets. We don’t miss the money — it is, after all, going to a wonderful cause — we miss the liquor!

Now that’s out of the way, we’ve got some highlights that make East Point Possums one of our favorite charity events of the year. 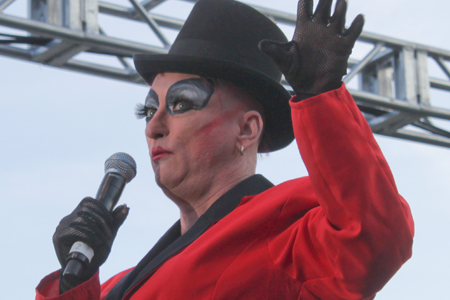 1. Rick Westbrook. The activist extraordinaire is a delight on the mic. From introducing audiences to his hot/drunk/country relatives to tearfully sharing that he’d just told some of them about his HIV status, Westbrook — who calls himself the “matriarch” of the East Point Possums family — pours his heart into the show he helped start in a backyard 15 years ago.

Westbrook also announced that next year’s beneficiary will be Lost-N-Found Youth, Inc., an LGBT youth advocacy organization that he helped found.

2. The return of Lola Lorraine. Apparently Lola has been seen in these parts before, but not for many years. Jeff Graham, executive director of Georgia Equality and a director of the Rush Center, took to the stage in Lola’s neon-colored outfit and blonde wig, singing her heart out for money. Wow. At Georgia Equality’s Evening for Equality on June 22, we suspect he might be wearing a different outfit. 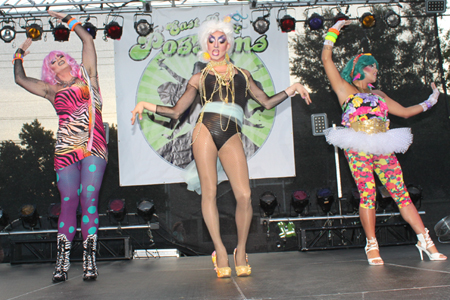 2. Edie Cheezburger and the Haus of Pancakes. We’re late to the latest Scissor Sister material, so thank god Edie and her two sidekicks brought out “Let’s Have a Kiki” in some of the most stylish gear on stage. To those who were seated around me, sorry. That was me screaming “weeeeeeeerrrrkkkkk!” throughout. 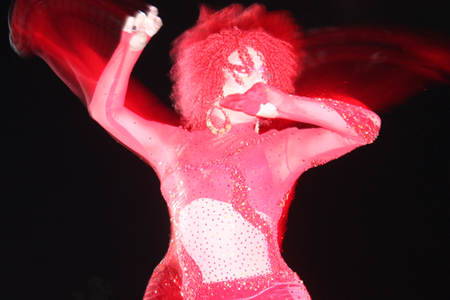 3. Summer Knight’s fire act. Ok, it’s not exactly Raven setting the Backstreet stage on fire, but Summer Knight’s Adele mash-up was well done for a stand-and-point number. She’s capable of splits and high-energy dance numbers, but Saturday was about the a medley with “Fire to the Rain” in it’s middle, complete with fireball snaps from her fingers. Let us know next time, girl, and I’ll save the camera battery for you!

On a side note, it brings me back to a favorite question of mine: Should drag queens do more magic? 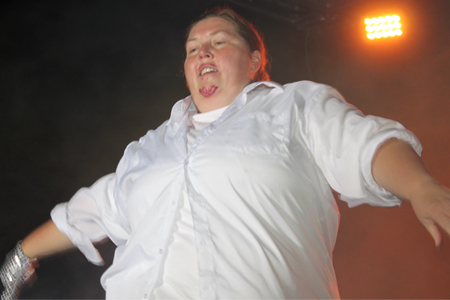 4. Sheila Merritt. Never mind the 12-minute, pre-finale mega mix she performed before hand with the infamous East Point Villagers, Merritt’s speech that led into the finale was inspiring. And we were like, two hours sober at this point, so you know it’s for real. The local LGBT communities needs voices like Merritt’s (and Westbrook’s, for that matter) to keep the spirit of giving alive. 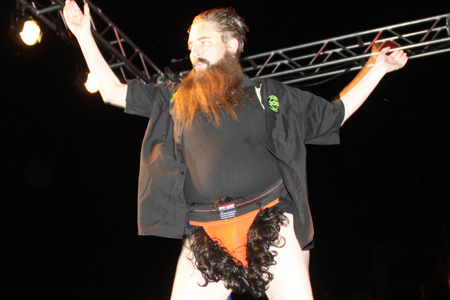 5. Diversity in acts. With three hours of drag (that at one point seemed like it would be four had the show started on time), you need a little more than a few queens in gowns and get-ups to keep the crowd going. There were old queens, young queens, camp queens, glam queens, serious kings, funny kings, group numbers, baton twirlers, pros and amateurs alike. Don’t forget the real boys and real girls that popped up in various states of dress.

That just about wraps it up for this year’s EPP Show. Don’t miss our special Hot Minute live from the scene due out Tuesday, June 19. In the meantime check out our photo galleries!

POSSUM UPDATE: Ooooooh! Possums organizer Prissy Cilla (John Jeffrey) Facebooked us with the real scoop on what happened with the start time and the liquor crisis at this year’s show.

First, the start time is apparently always 8 p.m.! I wrote a few calendars that contained 7 – 11 p.m.  with no mention of the doors/start time because that’s the first thing I saw on the Possum’s site. I had no clue that 7 p.m. the door time, but here it is, right here.

Sorry y’all. You were right on time, and should be applauded for wrangling all those queens! And thank god I never knew the difference or I would have been late!

Second, here’s the scoop on the group running out of sangria and Possums Punch:

We drank too much!

Seriously, though. Prissy says the Possums team “doubled” their order this year to “cover the estimated 1,000 people.” That means we went through 60 gallons of punch in about two hours. The good news, Prissy says, is that Southern Comfort was onsite this year and wants to discuss a larger partnership.

Thanks for the tips! We’re all looking forward to next year’s kiki!

We’ll let you know how much money was raised as soon as the Possums dig it out from various cracks and crevices and rip it off plenty of duct tape!