Together almost 11 years, the couple adopted a newborn earlier this year and are the doting daddies who say they are blessed to receive such a gift. And while two ultrasounds told them to expect a little boy, the arrival of  Caylee was, they said, divine.

When they laid eyes on their daughter, shock immediately transformed to rapture. “We felt like she was divinely sent. She even had some of our features, so much so [that] in the hospital, the biological mother’s mother pointed it out,” Rashad says. “It was a very spiritual moment. We knew she was intentionally brought here for us. She’s so precious, so beautiful.”

Oliver says, “I don’t think there’s any greater thing that a human being can do than pour into another human being and raise a child. There is no other thing that is greater than that. It fulfills your life. I believe that is what humans are designed to do.”

In the beginning of their relationship, Allen had to face coming out to his family while also struggling to deal with wanting to be a pastor.

“It’s not a matter of tradition but how we interpret the Bible. I knew that God loved me… but being an openly gay man, what does that look like in terms of ministry? I had never seen an openly gay man with a thriving ministry.” [Allen’s] passion grew: “so many people who didn’t believe in the rhetoric of the Black church needed a place to worship and feel safe,” he says.

With the support of Burgess, Allen started a church that began with just 12 members. Today, Vision Church boasts some 3,500 members with about 600 showing up each Sunday in the pews. Members come from all walks of life: black, white, Hispanic, gay, lesbian, transgender, straight. 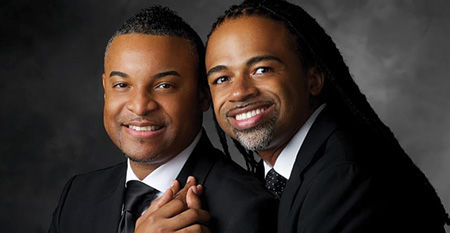 For Burgess, branch chief at the Center for Disease Control for the HIV/AIDS division, being a husband and father are dreams come true.

I grew up in a home with a single mom for the first eight years of my life,” says Rashad. “Then she got married for the first time.” He observed what his stepfather did right. Through that lens, “I knew that I wanted a strong, solid marriage.” Rashad believes that his union completes that vision. “I have never seen a man that can nurture and love the way Oliver does. It’s truly infectious. And consistent.” Rashad goes on, “In our most challenging moments, in all these years, I never got that sense of, ‘This man doesn’t love me.’”