It’s been a banner year for Linda Ellis, executive director of The Health Initiative (www.thehealthinitiative.org), who was invited to the Easter Egg Roll at the White House and also received on behalf of the Health Initiative this year’s Dan Bradley Humanitarian Award at the HRC Dinner. Realtor Barb Rowland (www.commongroundrealestate.com) placed second and ally Laura Gentle, founder of the “I’d Give the Shirt Off My Back” campaign for the homeless (https://www.facebook.com/shirtoffmyback), came in third.

Harlan Smith is a research assistant (counselor) for a serosorting HIV intervention study with the SHARE Project, through the University of Connecticut, based in Atlanta. He is also a former employee and current volunteer of AID Atlanta (www.aidatlanta.org), where he was an HIV testing specialist. At AID Atlanta, Smith created the Red Project, a safer sex program, which is still in use today, and was the lead HIV testing specialist for the Evolution Center. Last year’s winner Chandler Bearden of Positive Impact (www.positiveimpact-atl.org) placed second, Rick Westbrook of the Atlanta chapter of the Sisters of Perpetual Indulgence and Lost-n-Found Youth (www.Lost-n-Found.org) came in third, and Georgia Equality Executive Director Jeff Graham finished in fourth (www.georgiaequality.org).

This was a tight race for all nominees, ending in the first-ever exact tie for GA Voice Best of Atlanta awards. In first place are Tracee McDaniel, longtime transgender activist and founder of Juxtaposed Center for Transformation (www.thejct.org), and James Parker Sheffield, director of organizational development for The Health Initiative (www.thehealthinitiative.org) and former executive director of Atlanta Pride. Placing second was Giselle Lawn, an active member of Saint Mark United Methodist Church (www.stmarkumc.org). 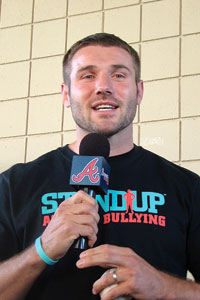 Rugger and straight ally Ben Cohen actually lives across the pond, but he founded his international anti-bullying StandUp Foundation (www.standupfoundation.com) in Atlanta and regularly visits the city to support local events — most recently to throw out the first pitch at the Atlanta Braves’ “Out in the Stands” game — and spread the word about his nonprofit that combats LGBT bullying and homophobia in sports. He’s also an honorary member of the Atlanta Bucks and rode on the team’s float in last year’s Atlanta Pride parade. Dave Bellevue of the Atlanta Bucks (www.atlantabucksrugby.org) placed second and Sean Fitzgerald of the Atlanta Rainbow Trout (www.atlantarainbowtrout.com) finished third.

As owner of LeBuzz (www.thenewlebuzz.com) in Marietta and organizer of the Marietta Rainbow Festival celebrating its third year July 25-27, Johnathon Murphy ensures those not living close to Midtown still can enjoy plenty of LGBT events and parties without a drive ITP. Isaac Kelly, founder of the growing Augusta Pride (www.augustapride.com), placed second and Mike Chadwick of Athens Pride (http://ugaglobes.wordpress.com) placed third.

Atlanta’s LGBT community has a hero in U.S. Rep. John Lewis (http://johnlewis.house.gov), who was easily voted to the top spot as  both Best Local Politician and Best Straight Ally by GA Voice readers. He was recently honored by Georgia Equality at its Evening for Equality event with the Champion of Equality Award and never fails to speak out on his support of LGBT issues in Congress.

When it comes to foes, it’s the Republican Party (www.gop.com) which is deemed to be the biggest enemy to LGBT people. With stances against marriage equality and promises from its presumptive presidential candidate Mitt Romney to repeal the repeal of “Don’t Ask, Don’t Tell,” there doesn’t seem to be much room for us under the GOP tent. Georgia Gov. Nathan Deal (http://gov.georgia.gov) finished in second, just a few votes ahead of blowhard and former presidential hopeful and U.S. Rep. Newt Gingrich (www.newt.org).