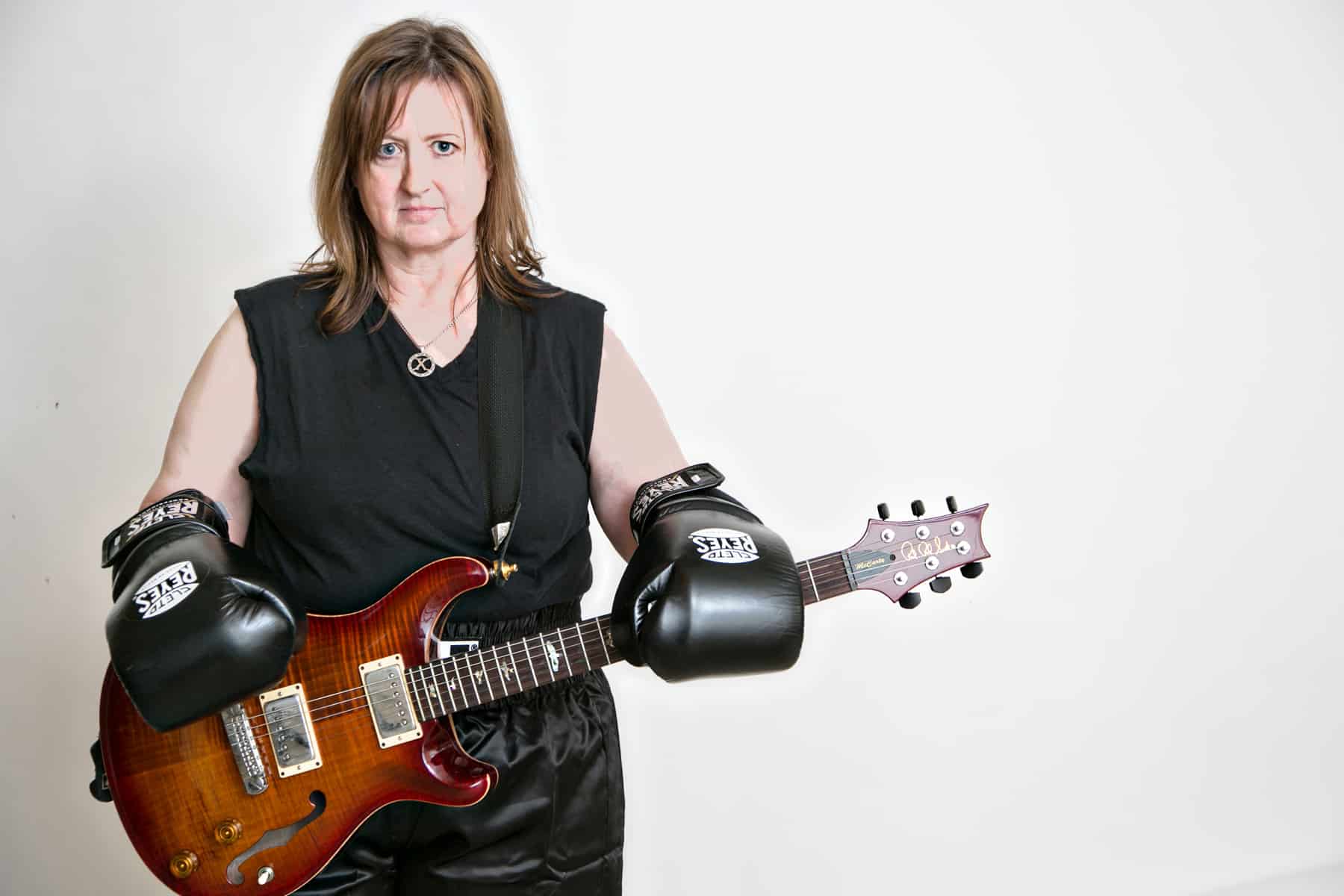 Lisa “Sulli” Sullivan is a beloved figure of Atlanta’s own Indigo Girls’ fans. For nearly 18 years, Sullivan has been the one making sure the guitars Amy Ray and Emily Saliers play on stage are in perfect shape before a single chord is is picked.

But in 2010, Sulli, as she is known, suffered a serious stroke and was out of commission, and out of prepping guitars. There was serious doubt she would be able to work again. Amy and Emily and hundreds and hundreds of Indigo Girls fans helped raise money to cover Sulli’s medical bills. And now Sulli is ready to give back.

Just not in any normal way of giving back, mind you. She will be boxing Thursday as part of a “Atlanta Corporate Fight Night” to raise money for the Wounded Warrior Project, even keeping a blog about her training and diet leading up the May 22 bout. Sulli will be boxing against lesbian caterer Holly Levine as part of a series of matches taking place at the Foundry at Puritan Mill from 6-11 p.m. Sulli “The Magic” Sullivan will be in one corner, wearing the Indigo Girls logo on her chest.

The GA Voice caught up with Sulli before her the main event and she talked about her recovery, why she loves boxing, and how grateful she is for the support of community.

GA Voice: Tell us about the illness you had and the recovery you have had to go through. Did you ever think you would never be able to use your arm again? How did you remain vigilant? What is your health like now?

Sulli: On June 5, 2010, I had a stroke. To be specific, I had an ischemic stroke, which is where a clot hits your brain and cuts off the blood supply to an area of the brain causing it to die. I had a clot come up from my right carotid artery damaging part of my right brain in which controls the left side of the body.  When it first happened my whole left side was “out of order.” I had the face droop, the leg wasn’t moving as well as my arm/hand.

I was fortunate that my leg and face recovered pretty quickly. My left arm/hand did not bounce back as quick. I was fortunate enough to be accepted into the ICARE hand/stroke study at Emory Rehab Center. Through this program I received the extensive occupational therapy that helped my arm and hand to recover quickly. The doctors also discovered that I had an auto-immune disease called Sarcoidosis while trying to uncover what caused my stroke. The Sarcoidosis was in full attack mode when I was recovering from the stroke. I was put on a large number of prescription drugs and I quit smoking, all of which added up to massive weight gain. I gained 75 pounds post stroke and I was a mess.

At the beginning of 2013, I found myself spending another night in the hospital because I thought I was having a heart attack. Fortunately, it was not. The excess weight was taking a toll and I decided then that I had to take care of myself better. After a year of boxing and watching what I eat I am almost back to my pre-stroke weight and am four years smoke-free. I feel like a new person. I am doing great!

What led you to decide you wanted to participate in a boxing fundraiser? Seems dangerous!

I used to do boxing fitness classes back in the 90s and it has been the only exercise that I absolutely love to do. This time around I have had the opportunity to take it to the next level and really learn how to box. A year ago, retired World Champion, Terri “The Boss” Moss opened up Buckhead Fight Club and I started training there. She is also the promoter/owner of Atlanta Corporate Fight Night. She asked me if I was interested and I agreed to do it.

I had attended two previous Atlanta Corporate Fight Nights so I had an idea what was involved. I know a lot of people have the impression that what I am doing is dangerous but ACFN is a fight that is sanctioned by USA Boxing, which is the governing body that oversees the Olympics and Amateur Boxing. There are strict guidelines that one has to go through just to get licensed, especially in the Masters division. Before I could get licensed I had to get a sports physical and permission from my doctors to participate as well as an ophthalmologist detailing the health of my eyes. The match will have referees that follow a strict set of rules that protect the boxer. Nobody will be beat to a bloody pulp like in the movies. I believe that I was on more of a dangerous path health-wise before I began boxing.

Who are you boxing for? What is it about the Wounded Warrior project that made you want to get involved in this way? Why should people come?

I think that our country sends our troops out to war and fails when the soldiers return on many levels. There are too many soldiers that slip through the cracks and don’t get the care they need and not all wounds are visible. That’s where programs like The Wounded Warrior Project and the SHARE Military Initiative over at The Shepherd Center in Atlanta come in. These soldiers are out there putting everything on the line for us and they should be taken care of. Funding for these programs is important!

Atlanta Corporate Fight Night 8 is on May 22 and starts at 7 p.m. [doors open at 6 p.m.] at the Foundry at Puritan Mill. There are going to be about 12 bouts. Evander Holyfield’s son Evan Holyfield will also be fighting on the fight card. It’s a “Black Tie, Black Eye Affair.” People will be dressed up to the nines. I went to the last two ACFN’s dressed in a tuxedo. It’s a lot of fun. This time around the Wounded Warriors will be there so it should be real inspirational as well. My opponent, Holly “Kale Krunch” Levine and I joke that we should call our bout, “Two Old Dykes Duking it out.” My ring name is Sulli “The Magic” Sullivan—a name bestowed on me by my trainer Terri Moss.

Do you still work with musical instruments and hear from Amy and Emily?

I do!!! August will be my 18th anniversary of working with Amy and Emily. They are like family to me. When I had my stroke they were right there at my side. They took care of me when I could not work. I was out of work for 6 to 7 months. They rallied the fans and friends to come together and help with my medical bills. I was uninsured when I had my stroke. I will never forget the kindness shown to me during that difficult period from everyone. Actually, Amy and Emily are sponsoring me for Atlanta Corporate Fight Night and I will be wearing the Indigo Girls logo on my chest. A lot of Indigo Girls fans are also supporting/sponsoring me in this fight. I reached out to them and once again they helped. Their generosity amazes me!