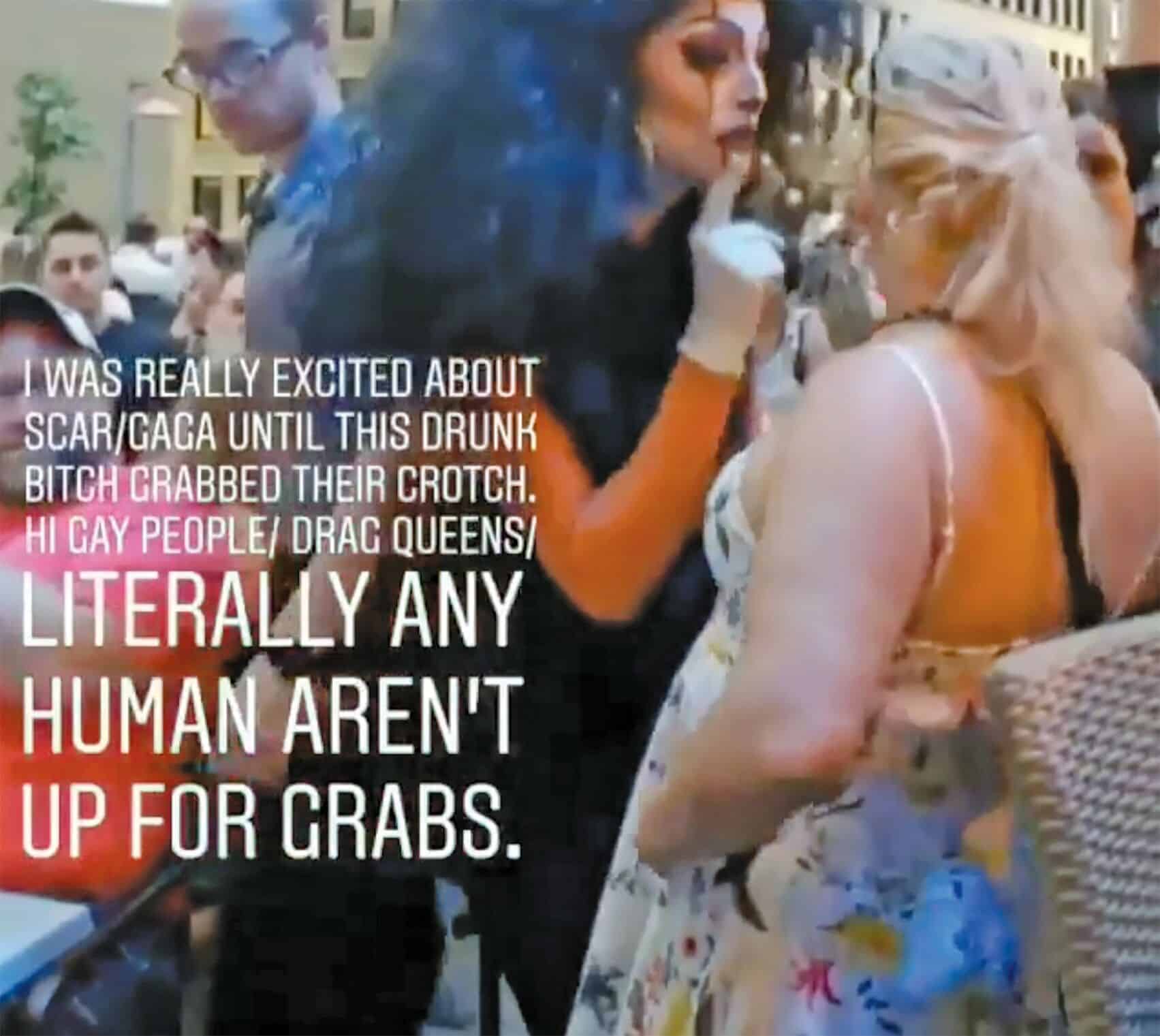 Keep Your Hands To Yourself!

A friend of mine shared a viral video with me the other night and asked if I identified with what was happening to the drag performer. In the video, taken at Disney this month, performer Lee Novak (Nocturna Lee Mission) is crotch-grabbed by an unknown woman as he begins a routine put together as Disney/Lion King villain, Scar. He spins to address his assailant, putting a finger in her face and giving her hell while she stumbles in place looking suddenly afraid. Oh, she’s no victim. But yes: I know that feeling too well.

Although I’m choosing to remain anonymous for the time being, I want everyone to hear what I’m saying and make absolutely certain that I get a message across. In fact, if you know anyone who needs this advice, go ahead and tear this page out of the publication, fold it up, and put it in their hand with the shadiest face you can pull on my behalf. Don’t let them ever forget these words, for as long as they live, because one day … they could save their drunken life.

DO. NOT. TOUCH. ME. Don’t put your damn hands (or anything else) on me. Simple as that. We clear? Thank you.

Now, I apologize if that comes across as rude, but it’s important to know that I, along with my other friends in the business, get this across in plain English. So again: Keep. Your. Hands. To. Yourself. Do not touch me (or anyone out here) unless you’ve got permission. We’re pretty, honey, and I get it. But we’re also like a fine exhibit at the High: Look — don’t touch.

When I was younger, I thought it was embarrassing, but ultimately cute for a sloppy, confused straight boy to try and put the moves on me. As I got a little older and more settled in what’s most often charity work performed in women’s clothing, it simply came with the territory and didn’t strike me as a positive or a negative. Now, however, I’m at the end of my rope with being put upon in a way that makes me feel like a cheap piece of meat, and I’m far from alone.

Let’s be honest: If a woman is wearing a sexy outfit and dancing her ass off out on the floor, is that what you do to her? Does her hair, makeup, and clothing give you carte blanche to sexually assault her in the darkness of a packed club? If so, you’re the nasty one — not her. And it’s not just men: Plenty of women are guilty of seeing a man pull off stilettos and wondering if the giant, juicy bubble-butt he’s dropping like a hot potato is real. (Here’s your hint: It’s a fantasy.) In any other setting, what you’re doing would get you a free ride to jail. Although I have never seen anyone get arrested for groping a drag performer, that’s only due to our generous nature which prohibits most of us from calling the law. It might not stay that way, if some folks don’t learn to behave.

For all those wondering where we’ve got our junk tucked, keep it at a wonder! What is it about being a man in a gay club that makes you think I’ll be fine with your hands in places that I haven’t even let a casual hookup touch? How dare you, sir/madame?

Here’s a story: I was working in Nashville recently when a woman did something similar to what happened in the video. I was sauntering across the club when a hand, seemingly out of nowhere, slid up my thigh and onto my privates. I instinctively balled up a fist, only to be met with the face of a drunken woman, which uncurled my hand instantly. (Reflexes.) It was too late. Her boyfriend was on me like white on toast, and the only thing I could say over and over was, “She grabbed me! She grabbed me!” Still, he wanted to fight, but naturally, it never came to that, as I’m more of a lover than a fighter. The couple ended up leaving with nothing short of her making an ass of herself screaming that I almost hit a woman and that we’d see her on social media, she was going to file a lawsuit, blah blah blah. No offense to the club, but I wanted her to show herself on social media. I wanted this to become a jumping point wherein we talk about this issue on a larger scale. She never showed.

I’m grateful that the Disney video has gone viral, however. I feel so reassured when I read the comments — a first! Like most people in the bars/clubs, common sense isn’t that far away. It’s the few bad apples that try their best to ruin this for us.

Just try and remember that most of us are out here working for the betterment of the community. We’ve got a “9 to 5” that we’re taking a break from and have spent more money that’s sane providing entertainment for the city and a few extra dollars toward charity. Don’t mess that up, ok?