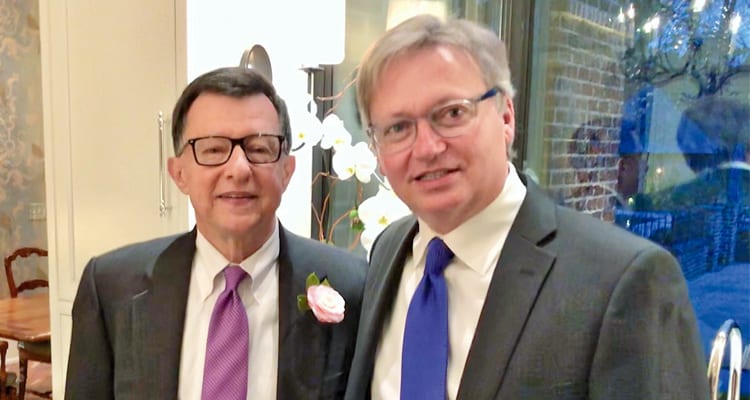 Marc and Walter: Life with Alzheimer’s

While most of our readers recognize this month as Pride month, June holds another title that affects many in our community: Alzheimer’s and Brain Awareness Month. The Alzheimer’s Association estimates that 5.8 million people are living with Alzheimer’s in America right now and 16 million provide unpaid care for them. Included in the more than 20 million people affected in some way by the disease are Walter Allen and his partner Marc Moss. Walter was diagnosed with early-onset Alzheimer’s in May 2015, only a year into his relationship with Marc; Marc has been acting as his caretaker ever since. Marc talked to us about how Walter’s diagnosis has affected him and their relationship, advice he had for others taking care of their partners, and the importance of bringing Alzheimer’s awareness and education out into the world.

While to someone unaffected by Alzheimer’s a day in the life of a caretaker can seem daunting and even overwhelming, Marc says that they live their days as anyone else would, it just takes a little more work. “Caretaking is just a matter of giving direction,” Marc said. “Walter is a very smart man and takes very good care of himself, it’s just a matter of oversight. My work is to just confirm everything that he might need help with along the way. For example, it might be hard for him to prepare a really good breakfast at this point. It’s just a matter of getting his day started and making sure he’s ready.”

“We plan our days just like anyone else would,” Marc continued. “We just have to give extra thought to things like schedules, how long it’s going to take to get ready, and if we have everything we need. We don’t go out as much as we did. The time constraints we have are unique; sometimes the plan will change last minute because we can’t find something or we forgot to do something.” However, even with the slight adjustments they’ve had to make, Walter and Marc still make sure to stop and enjoy life. “Walter still enjoys the life that he never thought he would have,” Marc says. “We take a lot of trips and when we can we entertain. It’s just a matter of paying different kinds of attention; everyone needs their shower, everyone wants to go to the movies. We just have to plan it differently.”

While Marc contends that Walter’s diagnosis creates no obstacles to daily life — “they don’t really exist” — he finds the most difficulty in ensuring that Walter never feels incapable while he helps him. “It’s difficult because I don’t want Walter to ever feel as though I don’t think he can do something,” he said. “Because he can, I just find that sometimes we need to do utilize a slower schedule. When he was first diagnosed, I was not prepared to have to think for Walter like I do. I just hope he’s happy with what I’m doing.”

With these changes, Marc has to be very active in Walter’s life regarding his decisions and plans, but he makes sure Walter maintains his independence for as long as possible. Walter takes care of their pet cat, volunteers weekly with Meals on Wheels, and runs errands and gets lunch with friends.

While the diagnosis brought some changes to daily life, the only changes it made in Marc and their relationship were for the better. “We’re both exactly the same people as when we first met,” Marc said. “As our relationship has grown throughout the years, his diagnosis has remained only one part of it. Walter’s diagnosis changed me because it made me aware that life will go on and is going on. I have to be more self-aware in our relationship — paying attention to how I might sound to Walter, what he needs help with, how he responds to my words — and it made me better able to adapt.”

Marc had some pieces of advice for those who may find themselves in the role of caretaker for their partner. “I’d encourage them to be open to seeing things differently and realizing that every day is a different normal,” he said. “For me, it’s important to never correct Walter or to never try to get him to see it my way.” He also encouraged those who know someone with Alzheimer’s, even if they’re not caretaking, to talk to them openly about the disease. “I’d suggest that people ask the person with Alzheimer’s how they’re doing,” Marc said. “Walter’s biggest thing is getting people involved and teaching them so that they can possibly help someone else. Just to understand the situation is helpful to everyone.”

After the diagnosis, Walter realized how important and helpful Alzheimer’s education and advocation can be. “Walter wants other people to talk about it and try to understand it,” Marc told us. “It’s so important to help others — talking about something and bringing something into your life, not making it your life, is so important.”

Even though Alzheimer’s can cast a dark shadow over life, Marc and Walter don’t allow it to affect their happiness. “We’re just about as happy as can be,” Marc says. “Walter is the happiest and most positive and inspirational person I could ever imagine considering what’s going on with his brain. Our lives and our world have become much smaller, but much much richer. People sometimes ask me, ‘Do you feel like you’re saying goodbye a little bit every day?’ My answer is absolutely not. Yes, things do change every day, but this is part of our lives; we’re not letting it become our whole lives. It’s the same thing as being gay. There are so many wonderful aspects of life, this just happens to be one of them.”