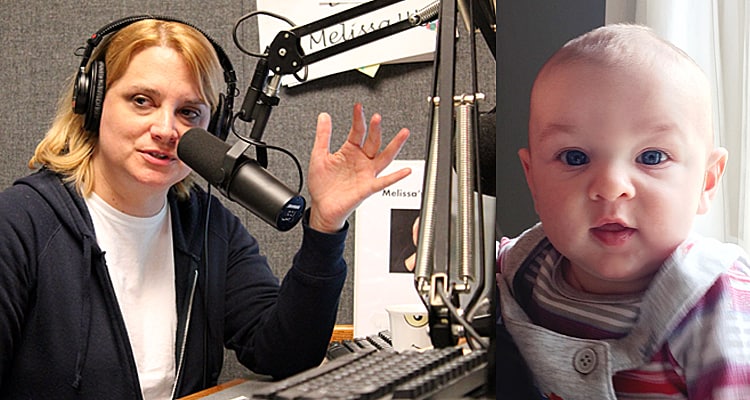 Going through a life-threatening experience will make most people re-evaluate their priorities. B98.5’s Jeff & Melissa Morning Show co-host and Georgia Voice columnist Melissa Carter found herself in that position when she received a kidney transplant in 2002.

“When I was faced with the illness, I thought, ‘was there anything in my life that I regret?'” she says. “And once I got that second chance it kind of lit a fire, because I don’t think I was a very self-motivated person up to that point.”

What began to motivate her after that was the thought of having a child. But she knew if she had kids she wanted to do it with a strong partner who felt the same way she did: that it was her destiny to be a mom.

Cut to 2006 as the then co-host of Q100’s “The Bert Show” found herself on her third date with Katie Jo, who declined to be part of the story due to personal reasons.

“She made a comment to me like, ‘Look if we decide to be serious with one another, I just want you to know that I plan on being a mother. So if that isn’t part of your worldview then you may not want to stay with me,'” Carter says.

By 2008 they were in a solid place relationship-wise and had moved in together. Then the journey to find their child began.

Looking for a donor

Carter couldn’t carry due to the transplant and her age, and Katie Jo’s doctor advised against her carrying due to a dormant condition that could be sparked by a pregnancy. They considered adoption, but opted to try surrogacy first.

In 2008, they first went through a local fertility clinic to have Carter’s ova frozen and then needed to find a sperm donor. They tried the sperm bank route, but most of the donors didn’t want to be contacted and the couple wasn’t comfortable with their child not being able to know its father, so they decided to go with somebody they knew. But what factors did they consider when deciding whom to ask? Intelligence and good looks for starters, and if you were short or bald, you didn’t make the cut.

“The reason we did that was because the shorter men we knew and the balder men we knew seemed to be very insecure about it, so our thought was if we had the ability to choose without being emotionally attached, then we would try to have a list of things that we thought would help a guy feel confident,” Carter says.

They also wanted someone who already had a child.

They found someone within their social circle whose wife they were good friends with. They asked him if he would be willing to donate and he said he would be honored. The process had taken two years by this point; they had the embryos and the sperm, but put things on hold because Carter was still on “The Bert Show” and was thinking at the time that she would leave to free up her time to take care of their child.

Unfortunately, the “Fantastic Four,” as Carter came to call her frozen embryos, did not survive.

She left “The Bert Show” in March 2011, but soon became an afternoon news host on All News 106.7 the following year after Carter decided she couldn’t totally leave the radio life. But that was also when they decided to move forward with the next step—finding a surrogate.

The surrogate on the other side of the country

On the advice of lawyer friends, they used a web service for freelance surrogates instead of going through an agency. They thought they had a match with a woman in North Carolina, but she mysteriously backed out at the last minute. Carter has a theory as to why.

It was a major setback, but they pushed on and decided to make sure the same thing didn’t happen again by placing another ad with the service clearly stating they were two women looking for a surrogate. A lesbian in Oregon quickly contacted them. They interviewed each other over the phone, hit it off, and their surrogate was found.

As anyone who has gone through a round of in vitro fertilization will tell you, it is not a pleasant process. It’s not cheap, either. Carter and Katie Jo each went through two rounds of hormone treatment to retrieve their eggs, and the final three rounds occurring in back-to-back-to-back months last year—Katie Jo in October, Carter in November, and Katie Jo again in December.

“We were able to get five viable embryos from that collection from both of us, and we got one kid out of it,” Carter says. “He started out as twins and one of the twins didn’t make it, so Mr. Carter is the final kid from all that effort.”

But before that effort could come to fruition and Carter and Katie Jo would finally meet “Mr. Carter” as he will be referred to for privacy reasons, there was a bit of controversy.

The week before his birth, Carter wrote a column for the Georgia Voice that was an open letter to her son giving him words of wisdom and advice. It was a sweet and initially well-received column until one segment of readers picked up on a line at the end about how the son will be healing from a circumcision.

The anti-circumcision movement picked up on it and flooded the comments section of the column as well as Carter’s Facebook page with criticism.

Carter, who says that up until that point she was not aware an anti-circumcision movement existed, says that the decision whether or not to circumcise their son was a point of debate between her and Katie Jo.

At first Katie Jo objected because she was worried about him being harmed. Carter asked other mothers their opinions and they recommended it from a cleanliness perspective, but what made up Carter’s mind was when she talked to straight women who had dated uncircumcised men.

“They said the guys they dated that were uncircumcised almost were apologetic about it. They were stressed out at the thought of getting naked for the first time,” Carter says. “And that’s what did it, because my whole motivation for all of this is to try to alleviate reasons for him to be insecure from the start. Now, he’s going to be insecure about something but I just don’t want to contribute to that consciously.”

Carter says the criticism after the column came out got out of hand.

“If you have a position and you attack somebody to try and defend your position before they ever say anything or do anything and you don’t try to communicate with them and you just want to beat them down, then your message is never going to come across correctly. And it just came across as mean. I got comments on my Facebook page about how I’m already a failure as a mother so it’s like, you’re not really convincing me,” she says.

“I will say that I have never in my life cared about nor been as educated about the penis as I have in the last six months.”

Doctors pegged October 1 as the surrogate’s due date, and as the day arrived and Carter, Katie Jo and their extended family descended on the Oregon hospital, the staff dropped a bomb on the excited couple.

Since the surrogate was having a C-section, the delivery room was considered an operating room and the hospital’s standard operating procedures allowed only one person to be in the room with her.

“The surrogate was livid, I was livid, Katie was livid, but the nurse on duty was adamant in her position,” Carter says. “But none of the three of us were willing to give up the fight.”

Eventually a compromise was reached: one of them would be able to stay in the room from the beginning, and when the doctors were ready to pull the baby out, the other could come in, but would have to leave right afterward. Carter conceded the spot to Katie Jo, and when the doctors were ready to bring their son into the world, they signaled Carter to come in.

“The surrogate had Indigo Girls playing, which I though was very apropos with three lesbians in there,” Carter says, laughing.

And while “Closer To Fine” played in the background, the doctor said “here we go,” and Mr. Carter—as he’ll be known publicly from now on—met his mommies.

And with that, they became parents. Carter said she had no idea how to hold him, but pretended she did, and she had one message for him.

“One thing I did was I kept whispering in his ear, ‘You’re okay.’ Because who knows where we come from and I thought if he’s aware that he’s coming from somewhere else, that he’s confused and I wanted him to know that he’s okay,” she says. “I just felt immediately the sense to comfort him, so I guess that was my first taste of maternal instinct.”

Mr. Carter is an agreeable baby. He only cries when he’s hungry, which is probably often given his size.

“He’s huge. He’s almost six months old and he’s already in 12 month clothes,” Carter says. “Even when he came out of the womb, his arms and legs just kind of unfolded into these big spindly things. So I think he’s gonna be a tall dude.”

Carter thinks their son will be a laid-back but social kind of guy, with a mischievous side.

“He’s got one of those pencil dimples in one cheek and he’s figured out that if he smiles with an emphasis on that side of his mouth that everyone gives him what he wants,” she says.

But one of Carter’s biggest concerns is making sure their son doesn’t feel like an outcast.

It was important to Carter and Katie Jo that their son know his biological father, that he know exactly where he came from. The father has visited several times and held and fed the boy to whom he considers himself an uncle.

“But Mr. Carter will know that that’s his biological father,” Carter says.

Carter returned to B98.5 last November a newly minted working mother. There were some schedule adjustments to make. She used to go to bed around 11 at night, get up at 3:15 a.m. for the 5 a.m. show, then come home around noon and nap until mid-afternoon. These days she’s in bed by 8 p.m. and there are no more afternoon naps.

She’s on Mr. Carter’s schedule now, and that’s just fine by her.

1. Do not purchase a black light, because it will reveal all the spit, snot, and pee that seems to make its way into your clothes on a daily basis.

2. No gym can give you the same workout that lifting an ever-growing child out of a car seat can.

3. You are no longer right-handed or left-handed. You are now free-handed, and use whichever one that’s not holding your kid.

4. Even though you never considered yourself vain before children, you can’t help but turn narcissistic when someone says, “Your baby is so cute!”

5. The fatigue of motherhood can break your spirit, but when those little arms reach out for you, things don’t seem so hard anymore.