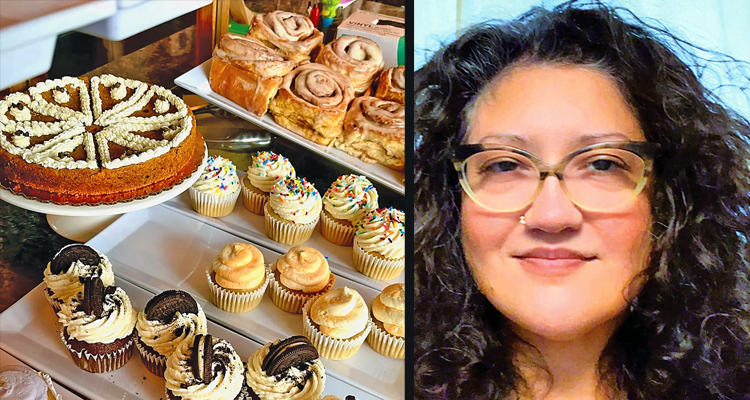 Dulce Vegan is a queer and woman of color owned vegan bakery and cafe that has been in Atlanta since 2007. Originally, it was just a wholesale vegan bakery working out of rented industrial kitchens, but demand became so high that eventually it was able to shift into a proper brick and mortar restaurant.

Owner Idalys Sansores has had a longtime love of both plant-based diets and helping people through food. When she was a child, she spent a lot of time at her grandmother’s house, due to her parents’ busy schedules of work and school, so she saw firsthand how much joy cooking and baking for the family brought. Sharing food with her loved ones was how her grandma showed her love and appreciation for everyone, and that stuck with Sansores through adulthood. Likewise, a traumatic experience in middle school while visiting relatives at a farm started her plant-based journey. Seeing how mistreated and disregarded the farm animals were prompted her into vegetarianism that day, and she hasn’t looked back since. In fact, she has only gone further into the plant-based lifestyle the older she gets. She was vegetarian until she was able to make meals for herself, then switched to veganism. Some culinary inspirations of hers are Isa Chandra Moskowitz, Fran Costigan, and Ani Phyo.

Founding Dulce Vegan was a long and tedious process. The owners of a local coffee shop had lost a vegan bakery they owned in Athens and therefore needed a new supplier of vegan baked goods. They knew that Sansores loved to bake, so they asked if she could help until they found a new bakery. Before she knew it, word spread and parents would contact her to make cakes for their kids with allergies, and that was essentially the start of the business. It took a while to get a physical storefront, because she didn’t make enough money to qualify for loans, so the store only grew when she could afford it — but she said the slower growth was actually a good thing for her.

One challenge she faced when founding the bakery and cafe was a major case of imposter syndrome.

“[I had to get] out of my own way,” she said. “Imposter syndrome is real. And as a small business owner, wearing so many hats can often be overwhelming. You can forget that maybe you do know some things after all.”

The atmosphere at the restaurant is safe and welcoming, with an affable and mostly femme staff. The food is fresh and filling, with nearly everything made in house, and the baked goods are delicious — not overwhelmingly sweet — and prepared with care. Some suggested items that new customers should try are the cinnamon rolls, lemon scones, the Kirkwood sandwich, and the egg, bacon, avocado and aioli sandwich. One item Sansores is hoping to bring back soon is the eggplant Parmesan, so look out for that!

Dulce Vegan is a longstanding member of the Kirkwood community that serves easy vegan brunch options with pleasant outdoor seating and friendly baristas. Give it a visit if you haven’t yet!