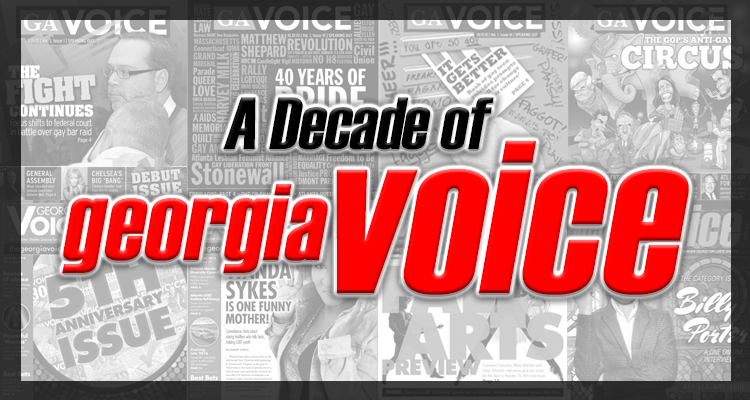 From Past to Present: A Decade of Georgia Voice

As we celebrate a decade of bringing a voice to the Atlanta LGBTQ community, we think it’s important to highlight some of the notable moments over the past ten years. From politics to entertainment, we’ve been there every step of the way covering what matters the most: your voice!

The Atlanta Police Department’s Red Dog Unit raids the Atlanta Eagle, an action later deemed unconstitutional. The city later settled with patrons of the bar for $1 million and promised to change procedures.

Atlanta Pride returns to Piedmont Park and is held for the first time in October. The Trans March becomes a part of the fest.

A pair of anti-LGBTQ so-called “religious freedom” bills failed to pass in the state legislature.

Georgia celebrates as the U.S. Supreme Court strikes down same-sex marriage bans nationwide. The state of Georgia followed the law and marriages proceeded across the state, and Atlanta’s LGBTQ community congregated at the corner of 10th Street and Piedmont Avenue to celebrate well into the night.

The Senate passes SB 375, which calls for allowing private adoption agencies receiving state funds to deny adoptions for certain couples or individual parents based on sincerely held religious beliefs. It does not make it through the house.

Soon after taking office, Mayor Keisha Lance Bottoms appoints an LGBTQ advisory board to help shape the city’s policies and engagements with Atlanta’s LGBTQ communities, and serve as a bridge between City Hall and LGBTQ residents.

After nearly a decade of covering the LGBTQ community, Georgia Voice updates its logo and layout for print and online versions.