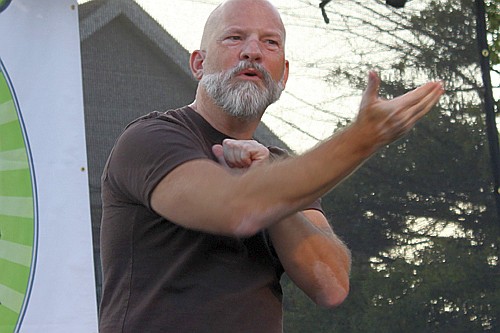 On June 27, the Atlanta Pride Committee announced the eight individuals and organizations chosen to lead this year’s Pride Parade. Among those selected for the honor was Indiana native (and current Georgia resident) David Cowan. Cowan works as an American Sign Language (ASL) translator for deaf and hard of hearing people. He’s been a deaf interpreter at Atlanta Pride since 2000 and has played the same role at a number of social justice marches and other events over the years.

One of the first things that Cowan wanted to point out is that the term hearing impaired “is no longer appropriate use. It’s considered offensive.”

Instead, Cowan said, “Please use these wording, ‘deaf and hard of hearing’. It’s like calling you ‘sign language impaired’ because you don’t know sign language. We do not consider ourselves as ‘impaired’; we were born this way. Impaired means being in an imperfect or weakened state or condition, such as a diminished in function or ability or lacking full functional or structural integrity. It diminishes who we are. We have a language and culture.”

Born in Indianapolis, Indiana, Cowan lived in several northern states growing up, and described his childhood as “Amazing. I had wonderful parents.” He had an active youth, spending his time traveling, boating, driving cars and snowmobiles.

As a young man, Cowan attended Gallaudet University located in Washington, D.C. It is the only liberal arts college for the deaf in the world.

“This is where I started working as deaf interpreter,” he said. “Now I am a freelance deaf interpreter. It’s been my passion to make language accessible in our community. It’s a privilege to break down the communication barrier.”

Cowan is a mainstay at social justice movements. He has translated in the Women’s March this past January, for Black Lives Matter and anti-Trump rallies in addition to Atlanta Pride.

“I have interpreted and worked with marginalized groups of people. I enjoy working with these groups who share the same principles as ours,” he said. “For example, American Sign Language is our language. No more language appropriation for profits. No more cultural appropriation. No more language deprivation. As for Atlanta Pride, Black Lives Matter, Anti-Trump, Women’s March, it’s really all about equality. No more oppression based on our skin color, our gender, our differences, our languages and our sexual orientation.”

With all of the rallies, protests and demonstration, Cowan admits that he has a favorite.

“My favorite and most memorable event was to see the interaction of deaf people in the LGBTQ community,” he said. “They were able to participate in the community events without having to worry about the communication barriers.”

Cowan said that the deaf gay and lesbian community in Atlanta is vibrant and thriving.

“There’s a deaf gay and lesbian community in Atlanta as well as almost everywhere else,” he said. “Usually, we meet for coffee or we get together for dinners once a month at different restaurants and coffeehouses to socialize. We also have different events that allow our hearing friends to come along and enjoy socializing with all of us. For example, we have ASL poetry nights, ASL jam nights, deaf professional nights and other types of activities that include everyone.”

‘We are not a silent community of people’

Cowan doesn’t limit his activity to the LGBT community, though.

“I am a member of an organization called ‘Deafhood’” he said. “We have monthly meetings to ensure that our deaf children, deaf adults, deaf senior citizens and deaf and hard of hearing friends and families are not suffering from language deprivation, language appropriation and cultural appropriation from businesses, workplaces, schools, public events and community events. We are not a silent community of people. We are loud in ASL.”

“It was an amazing experience working with the staff, movie production people and the other actors and actresses,” he said.

Cowan, a single man, said he is currently “meeting new people. Hopefully someday, I will meet my soulmate. I was in a relationship with my ex-partner. He is the father of our two beautiful children. We have a 19-year-old daughter and a 17-year-old son.” Then he added, “I’m the ‘mommy with a beard’”.

Cowan was, in his words, “shocked” after finding out he was named one of the grand marshals of this year’s Pride parade.

“I feel so honored to be recognized by these amazing people in our community,” he said. “It touches my heart.”

Cowan is the first deaf gay man to receive the honor of grand marshal — he’s quick to note that there was one deaf transgender person that was named grand marshal at San Francisco Pride.

“I want to thank the LGBTQ community in Atlanta for allowing me to bridge the communication between hearing people and the deaf LGBTQ people” said Cowan. “It’s been my passion to make all of our deaf LGBTQ feel welcome and included in all community events in Atlanta.”